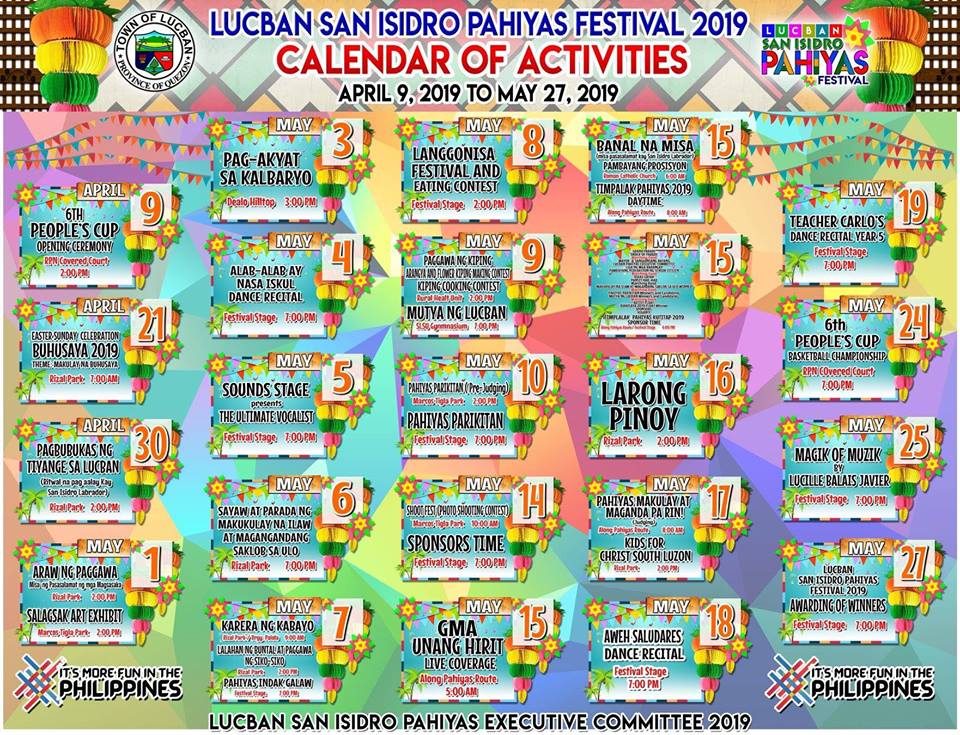 Pahiyas Festival is being celebrated annually in the Municipality of Lucban or Lukban in Quezon Province, Philippines. The Pahiyas Festival is held in honor of San Isidro Labrador the Farmer every 15 of May.
The Festival got its name from the Filipino Term “Hiyas” which means “jewel”. Pahiyas then connotes a precious offering.

The main attraction of the festival are houses lining the street of Lucban that are fully decorated. Various kinds of fruits, vegetables, rice grains, and other agricultural products and their famous colorful “kiping” adorned the houses which invite many tourists to visit the place every year.

Lucban’s Kiping leaf shape are thin wafers made from rice dough. These wafers are made into flowers like decors or mobile decor which is called “aranya”. People of Lucban use different kinds of leaves to be used as a pattern and apply various vibrant colors to the kiping. Various shapes and textures are being produced by using different leaves such as banaba leaves, kabal, cocoa, coffee, and cocoa to name a few.

Each household in Lucban Laguna competes with each other in term of their decorations.

Prior to the main event, people in Lucban are busy preparing for the Kiping. In producing the Kiping, the locals started to pick fresh leaves to serve as a mold for the wafer. Common leaves used are those of Talisay, Kabal, Cocoa, Cofee and Talisay tree.

After the leaves are readied, rice paste is prepared by soaking the rice for two hours. After which the soaked rice is grounded and food color is added to the mixture. The grounded mixture is then brushed on the leaves.

The leaves pasted with rice mixture are steamed for around 30 minutes. The steamed leaves are then dried until the rice paste can be peeled off.

After which the colorful Kipping is fashioned into several shapes and designed like the usual mobile or chandeliers seen in most houses during the festival.

The colorful Kiping can actually be eaten grilled or fried.

HOW TO GET TO LUCBAN, QUEZON

From Metro Manila, one can reach Lucban, Quezon by private vehicle or by bus. The bus going to Lucban can be found in the following terminals:
Cubao, Quezon City
EDSA-Kamuning/Kamias, Quezon City
Buendia and Taft Avenue, Makati City

From the terminal, take any bus going to Lucena, Quezon for P140. Travel time is between 2-3 hours. Upon arrival, get down at Lucena Bus Terminal and take a jeepney to Lucban for P25 at an approximately 30-45 minutes