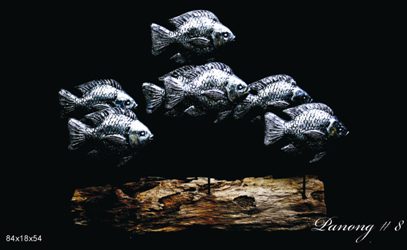 “Vito’s Panong #8 Fish Series. A seven pieces “Tilapia Fishes” made of fiber glass and mounted on a rustic Molave base.”

Fish symbol.  You see them on the back of automobiles everywhere. Occasionally, you see them worn on necklaces or bracelets. I used t have a fish symbol as key chain and pins .

Those little fish symbols. Just what are they? What do they mean? What are they suppose to symbolize?

FISH SYMBOL TO THE CHRISTIANS

This symbol was used primarily amongst Christians of the early church years (1st and 2nd century A.D.) The symbol was introduced from Alexandria, Egypt; which at the time, was a very heavily populated seaport. It was the port in which many goods were brought over from the European continent. Because of this, it was first used by the peoples of the sea as a symbol of a familiar deity, in this case, Jesus Christ.  The symbol was later used as a means of identifying or acknowledging a fellow believer in Christ without the need for any verbal communication being exchanged.

FISH SYMBOL TO THE CHINESE

To the chinese a fish represents wealth and prosperity . Twin golden carp swimming atop a golden yuanbao/ ingot/ coin is an even better sign. Not only wealth, abundance, but love, domestic felicity, partnership, tenacity, hence fertility, hence renewal is symbolised. Koi fish   either black or red, also symbolizes wealth and success. As with most Chinese symbols, the carp has a legend attached to it. According to legend, the carp is noted for its strength and bravery because it swims against the current, upwards, ‘mastering’ falls and ending up at a gate on the Yellow River called Dragon Gate. The carp turns into the revered Celestial Dragon when it makes a final leap over the last rapids.

FISHING INDUSTRY IN THE PHILIPPINES

Fishing is a PhP50 billion industry in the Philippines, contributing about 4% of the country’s GNP. With an annual production volume of 2.4 million metric tons of fish, it directly provides livelihood and employment to over one million Filipinos. Tuna is among the 200 or so species of fish found in the country that have high commercial value. The Philippines ranks 7th among the top tuna producing countries in the world, both in terms of fresh/frozen tuna and canned tuna.

As early as 1970, General Santos City has been tagged as the “Tuna Capital of the Philippines”. The total daily catch of adult and juvenile tuna unloaded in the city can surpass that of any other fishport or even the entire unloadings of all other fish ports in the country combined (Aprieto, 1995). The daily catch is easily disposed for foreign and local buyers. The city, being the sanctuary of seven (7) tuna canning factories with an average daily capacity of 750 MT per day and employs around 7,800 plant workers (GEM) the volume of catch on a per day basis is even insignificant as to the distribution of the market.

As of September of the previous year alone, the total catch has reached a voluminous 5,031, 866 kilos where ‘sashimi” grade adult tuna comprises 35 % or about 1,774,922 kilos. The locally distributed adult tuna for local consumption ate the largely 65% chunk and distributed to neighboring cities of Davao, Bukidnon, Cagayan de Oro, Surigao, South Cotabato and as far Japan and the U.S., skipjack for canned markets in Europe and North America.

Inspired by the fish, I designed a series of Fish inspired home furnishings which comes in the form of wall décor and table top home accessory. I called the collection, “Panong”. “Panong” is a vernacular term for the word “school or group”. The collection is basically a scholl of fish which comes in many forms.

These collection is available at Jojo Vito Designs Gallery ; Negros Showroom in Bacolod and Sofamore in Davao. I have also made several version of these collections having the specs of the buyers.