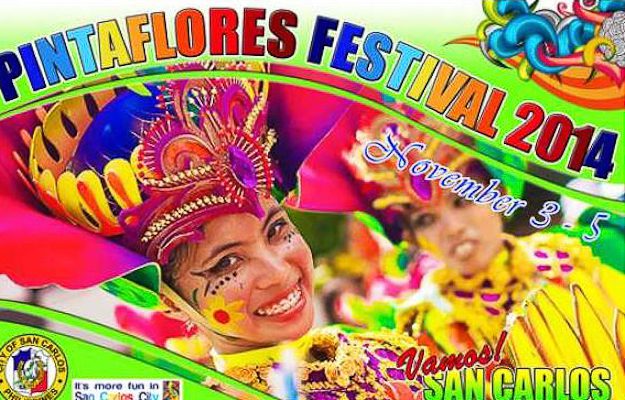 FESTIVALS IN THE PHILIPPINES FOR NOVEMBER

BANAAG FESTIVAL
Anilao, Iloilo | November 1
A dance-drama competition using light and all its forms as a medium.

EL CINCO DE NOVIEMBRE / KANYON FESTIVAL
Bago City, Negros Occidental | November 5
The historical “Parada Sg mg Cañon” festival commemorates the Negrenses’ bloodless revolt against the Spaniards led by Gen. Juan Anacleto T. Araneta in 1898. In commemoration of that historic bluff that freed Negros from Spanish conquistadores in 1998, the City Government of Bago celebrates that event with gleeful reminiscence and pride for a great General and his gallant men from this City who, armed with courage and ingenuity played a great role in the history of Negros. Spanish authorities in Bacolod capitulated after seeing advancing troops armed with rifles and cannons which were actually nipa stalks and rolled sawali mats painted black.

SANDUROT FESTIVAL
Dumaguete City, Negros Oriental | November 9-15
Is a joyful celebration of the people of Dumaguete, their innate hospitality, friendliness, and their propensity to live harmoniously with people of different race, religion, and cultural beliefs.
HELOBONG FESTIVAL (T’BOLI)
Lake Sebu, South Cotabato | November 9-15
One of the prettiest places in the Philippines becomes, even more, attractive this month, as its native residents celebrate a week-long cultural fiesta.See the T”Boli culture in its colorful best through the natives” traditional songs, dances and crafts.

PANDAG-KITAB ORIENTAL MINDORO (PROVINCIAL FESTIVAL)
Main Avenue, Calapan City | November 14
Pandag-Kitab came  from Pandanggo (Fandango) and Dagitab which is synonymous to “light”, adapting basic steps of Pandanggo sa Ilaw (Dance of Lights) which was told to have originated in Lubang, Mindoro Island. The style of Pandang-Gitab is the traditional “sway-and-balance”, with graceful shallow gyrating of hips and torso, complemented with a side-to-side gentle swing of hands, careful not to drop the candle-on-glass on both palms and on the head of the dancer.

KAHILWAYAN FESTIVAL/CRY OF STA. BARBARA
Sta. Barbara, Iloilo | November 17
Aptly dubbed as Kahilwayan Festival, Kahilwayan being an Ilonggo/Hiligaynon word which means Freedom or Liberty, it highlights the quest of the Ilonggos to attain freedom through their fiercely independent spirit. Anchored upon the Cry of Santa Barbara Celebration, Kahilwayan Festival is a cultural festival in a dance-drama form which is a reenactment of sort of the struggle for freedom by our very own local folks led by the heroic Gen. Martin G. Delgado.

LA UNION SURFING INVITATIONAL/SURFING FESTIVAL
Urbiztondo, San Juan, La Union | November 17-19
A community-based tourism activity where surfers from around the Philippines are invited to compete and have fun at one of the best surfing destinations in the country

URUKAY FESTIVAL
Anini-y, Antique | November 18- November 19
It is inspired by a local custom whereby a wedding feast is observed no matter how poor or humble the bride and groom are in this celebration, there is much fun and good natured teasing.

KALIMUDAN FESTIVAL (TRIBAL FIESTA)
Isulan, Sultan Kudarat | November 21
It is another tribal fiesta down in Mindanao, with just about every major ethnic group joining in the fun. Cultural sharing is the theme here, its message clearly displayed in the timeless songs and dances of these native folks. One need not be a Manobo, Tiruray or T’boli to take part in the fun—all you need are the right clothes, the right moves, and a genuine desire to go totally tribal!

CORDILLERA FESTIVAL
Baguio City | November 22
A showcase of the various tribal dances, rituals, and songs of the Cordilleras.

HIGANTES FESTIVAL
Angono, Rizal | November 22-23
Famous Festival, Angono’s joyous fiesta in honor of San Clemente whose image, resplendent in papal investment, is borne by male devotees during a procession accompanied by parehadoras devotees dressed in colorful local costumes, wooden shoes and carrying boat paddles and higantes, giant paper mache effigies. The street event culminates in fluvial procession at the Laguna de Bay amidst revelry that continues until the image is brought back to its sanctuary.

KABKABAN FESTIVAL
Carcar, Cebu | November 23-29
The festival is not just a religious fanfare in honor of the town’s patroness, St. Catherine of Alexandria, but a cuLtural catalog of the town’s historical periods and industry like shoemaking, as well as their arts that are showcased through street dancing and parade

ANGONO ARTS FESTIVAL
Angono, Rizal | November 5- November 25
The festival aims at creating awareness and appreciation of Philippine Art and Culture and promoting arts and culture as a vital attraction for local and foreign tourists. Rizal has the potential of becoming a tourist destination particularly in the field of arts and crafts. It is known as the home of various national artists, musicians, and other equally creative artists.