As an advocacy for change, PARA SA KABATAANG FILIPINO campaigns to change the destiny of Filipino children.

Its first event is happening in Bacolod City on December 1, 2012. it will be a benefit concert top billed SIDE A BAND who will be rendering their services for free.. The benfeciaries of this event are TAPULANAGA and Real Life Foundations, Kalipay Negrense and Bantay Bata 163.

The vision of Para sa Kabataang Pilipino is to mount  massive awareness campaigns for transformative action to change  the destiny of millions of Filipino children mired in abused due to poverty.

The movement  envisioned individuals , organizations, businesses, the media and social networks,the entire Filipino nation take up the fight to free children from vicious cycle of destitution and despair. We all have a part to paly to stop this deprivation for a better tomorrow. Only if we take our action can this vision come to reality.

“Para sa Kabataang Filipino” is a a national campaign. Therefore it aimed for different regions in the Philippines to embrace the advocacy, for each town and city to have their  own vision. It is envisioned a  “Para kay Ading” in Luzon; “Para kay Dodong” in Cebu in addition to the “Para kay Toto” in Negros. This is an advocacy from Batangas to Jolo.

The movers of Para sa Kabataang Filipino are ordinary citizens who wish to make a positive difference  in the lives of young Filipinos in need.  It is founded by Joey Benin former SIDE A Band Memeber and his wife Bing Benin. Kristine Jison is the executive producer of the event. 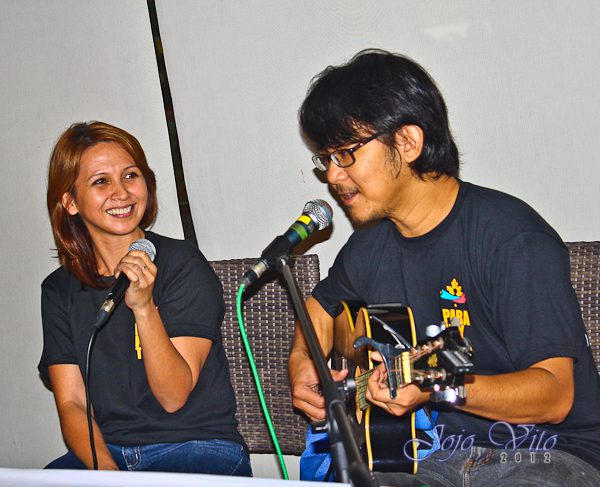 Founders of Para sa Kabataang Filipino: Joey Benin (former Side A Band Member and his wife , Bing Benin rendered a duet number during the presscon of Para kay Toto at L Sea, Bacolod City. Joey will reunite with the Side A Band in the upcoming concert at the University of St La Salle Colliseum

The organizers believed that through our collective compassion we can transform the future of the nation. This call for action has generated support from various celebrities:

We can make this lifetime count. Lets act now for the Kabataang Filipino.

Tickets for “Para kay Toto” Concert is available at the NEGROS Showroom (Lacson and Robinsons and Victory Center at Robinsons, Bacolod City.