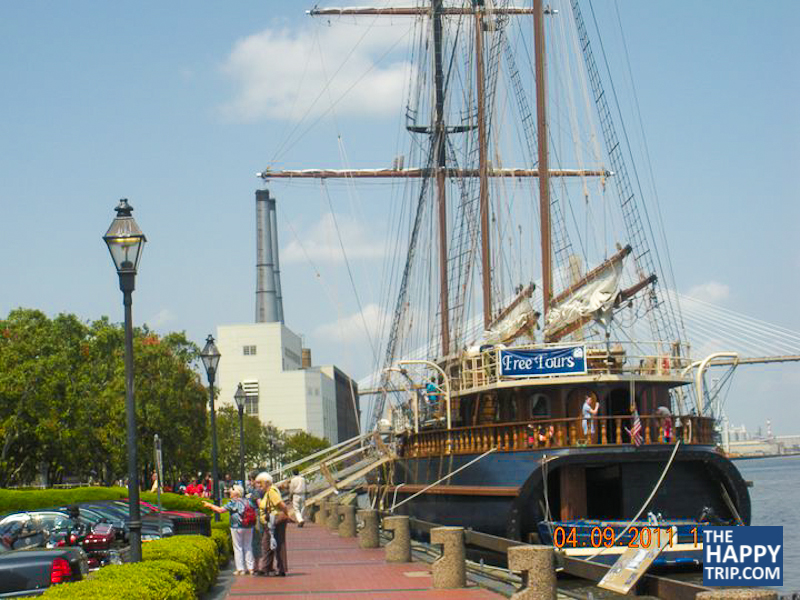 Here is one happy experience I have when I visited  the State of Georgia.I didn’t  realize that I might share my escapades with others. I was not really good at documenting things through photos. Nonetheless, let me share with you , my most memorable trip in Savannah.

Savannah is a historic city in Georgia, near the Atlantic Coast. The Savannah River winds through the city, making a riverboat cruise a relaxing way for visitors to enjoy the city’s southern charm and leisurely pace. River tours also give passengers unique views of the historic architecture and lovely gardens, as well as the opportunity to explore the area’s marshlands and barrier islands.

Of course, one of the must-do activity, when you visit Savannah, is the  Savannah River Site seeing Cruise.  The cruise  brought me back to a    bygone era on board a  riverboat harbor sightseeing tours. During the cruise, some voice over was telling us about   intriguing tales and historic facts  about the   beautiful city of Savannah.   In the short period of the cruise, I have learned the  history of Savannah.

In order for me to really see the view, I took advantage of an open-air deck.  The one-hour sightseeing harbor cruise is a fun and educational tour for children and adults alike.

The cruise provides every visitor with the background of the place. The Savannah River is a major river in the southeastern United States, forming most of the border between the states of South Carolina and Georgia. Two tributaries of the Savannah, the Tugaloo River, and the Chattooga River, from the northernmost part of the border. The Savannah River drainage basin extends into the southeastern side of the Appalachian Mountains just inside North Carolina, bounded by the Eastern Continental Divide. The river is around 301 miles (484 km) long. It is formed by the confluence of the Tugaloo River and the Seneca River. Today this confluence is submerged beneath Lake Hartwell. The Tallulah Gorge is located on the Tallulah River, a tributary of the Tugaloo River that forms the northwest branch of the Savannah River.

Two major cities are located along the Savannah River: Savannah, and Augusta, Georgia. They were nuclei of early English settlements during the Colonial period of American history.

Through the building of several locks and dams, and upstream reservoirs like Lake Hartwell, also, the Savannah River was once navigable by freight barges between Augusta, Georgia (on the Fall Line) and the Atlantic Ocean; maintenance of this channel for commercial shipping ended in 1979, and the one  below Augusta has been deactivated.

The Savannah River is tidal at Savannah. Downstream from there, the river broadens into an estuary before flowing into the Atlantic Ocean. The area where the river’s estuary meets the ocean is known as “Tybee Roads”. The Intracoastal Waterway flows through a section of the Savannah River near the city of Savannah.

Note: This article was submitted by my sister as a guest blogger. Should you wish to contribute an article, please do email us. Have a Happy Trip!