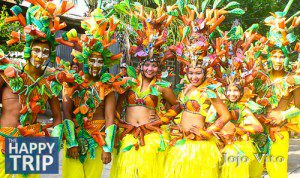 It was day of colors and drum beats at the highlights of 34th Pasalamat Festival in La Carlota City. I had the opportunity the be invited once again as a judge so I had a great chance to take photos at a close distance from the performers.

Again,I was amazed of the colors and creativity of costumes of the street dancers as well as their artistic use of indigenous materials in their floats, caricatures and costumes.

Pasalamat Festival in La Carlota City, Negros Occidental, Philippines is based on the tradition of giving thanks to gods of elements after a bountiful harvest by the ancient of Buglas. The city takes on a festive atmosphere during the weeklong celebration, which culminates with a Mardi Gras like parade of floats and caricatures. Dancers flirtatiously move to the rhythm created by the drumbeaters using carabao leather drums and percussion instruments made out of indigenous materials.

The festival was first staged on May 1, 1980, after a series of calamities fall in Negros Occidental, particularly in La Carlota. The fire gutted the commercial district of the city, the Don Juan tragedy, the labor problem that triggered the workers of Central Azucarera de La Carlota to go on strike and eventually paralyzed the sugar company, and some other uncertain conditions prevailing in the early 80’s.

Conceptualized by the late Mayor Luis “Nonoy” Jalandoni Jr ., who himself composed the “Sambita” the original Pasalamat Beat, the festival started in just a simple merry making and street dancing to mark the end of the milling and harvest season to thank the Divine Almighty for His blessings.