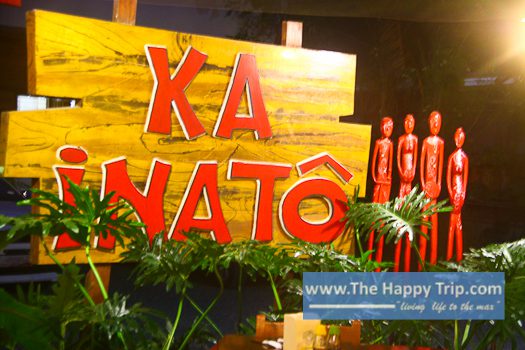 I have more to share about my El Nido experience but here in my Palawan Trip Part 4 series,  I opted to jump a bit and share with you an experience  I had with this lovely restaurant. 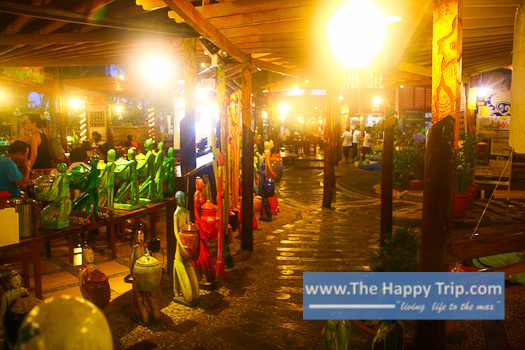 “As I enter the restaurant premises, I was greeted by various wooden sculptures common in Palawan”

That was my last night at Puerto Princesa. My friends were still in their offices so I have to find a place to eat while waiting for them.

At Go Hotel, I asked where is the best place to eat, that’s not really far. Of course I was looking for “Tamilok”, I only read about this delicacy, but I haven’t seen nor tasted it yet. The guard gave me various options, but most of these restaurants were quite far. So I opted for the option which was quite near from Go Hotel – the Ka Inato Restaurant.

From Go Hotel, I just took a tricycle and just pay  PHP 15.00. Ka Inato is located just along the Highway. And the tricycle dropped me off right in front of the restaurant.

As I enter the restaurant premises, I was greeted by various wooden sculptures common in Palawan. But these sculptures were colored and don’t look scary. In fact, I was immediately impressed by the ambiance of the Ka Inato. The al fresco restaurant was decorated   with several paintings and the alley was lined with multiple Palawan wooden sculptures painted in bright and lively colors. 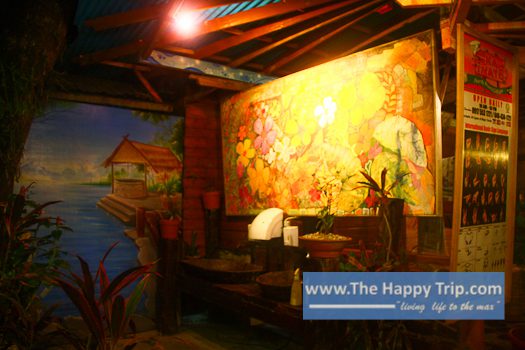 I was so disappointed upon learning that they don’t serve Tamilok as what I was told. In any event, I don’t desire to blow up my night  just because I cannot find this Tamilok and I cannot spend all my time hunting for it.   I will be back anyway, and  the next time I will come back at Puerto Princesa, I will certainly be eating this delicacy –just to fulfill my curiosity.

One of Ka Inato’s specialties is chicken inasal, but for heaven’s sake, I live in Bacolod City and chicken Inasal is also a treat. Then I browsed their menu and found their price really fair. I was not really starving, but I ordered the following:

They provide the complimentary clear soup. But sorry, I didn’t like the gustatory sensation.

They add 10% for the service charge. 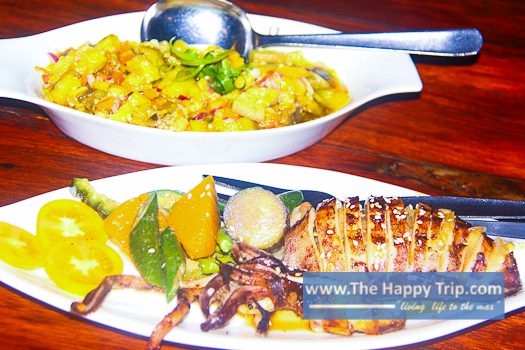 I was entertained by their food servers who were college interns in one college in Puerto Princesa. But one thing that truly got my attention was the food servers in yellow uniform. In their uniform was a mark which says “deaf mute proudly working”. I asked the interns about them and I was told there was around 10 deaf mute working at Ka Inato.

While awaiting for my food, a huge group (families I suppose) arrive and settled next to where I was sitting. Evidently they were local tourists like me as they were hashing out about their experience in some offices in Puerto Princesa.  As I was eating, waiters started to serve also the food of this group. A deaf mute server carrying a tray with bowls of complimentary soup came to assist the other board. The group

The group was busy speaking and sharing their joyful experiences. A young man didn’t notice the food server (as she cannot say “excuse” of course), hits the tray which made the hot soup spilled over him. The deaf mute server looked a bit scared and apologetic, but just making a sign language which I guess no one paid attention to. Then she left the table. Praise God, the guy was also gracious knowing it wasn’t intentional. A few minutes later, the server went back with a fruit platter and gave it to the guy she spilled the soup with. Then I heard the guy saying:” wow, I love fruits, who ordered this?” Nobody ordered for fruit from their table. Then they send for a waiter and return the fruit platter. Then I just heard the waiter said:” No, sir, that’s complimentary…. because of what happened”. 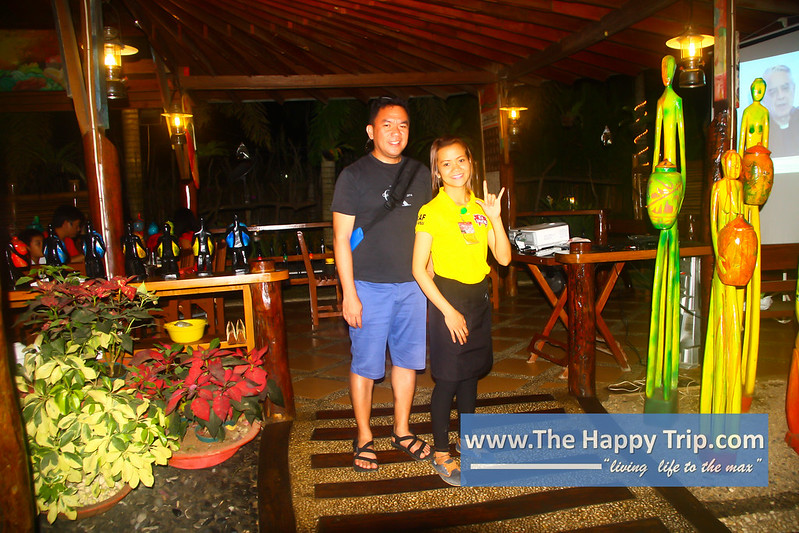 I like the policy and practice of the Ka Inato for giving complementary items to their guests considering of course of the thing which might happen with the staff that they have. But I like more the gesture of the family/group. I picked up an older guy saying, “No need for that, we infer. If this will be charged to the girl, then I insist we will just pay for it”.

That scenario completed my sumptuous meal at Ka Inato. The food nourished my body, but  the exchange of good gestures of the people I saw nourished my soul. 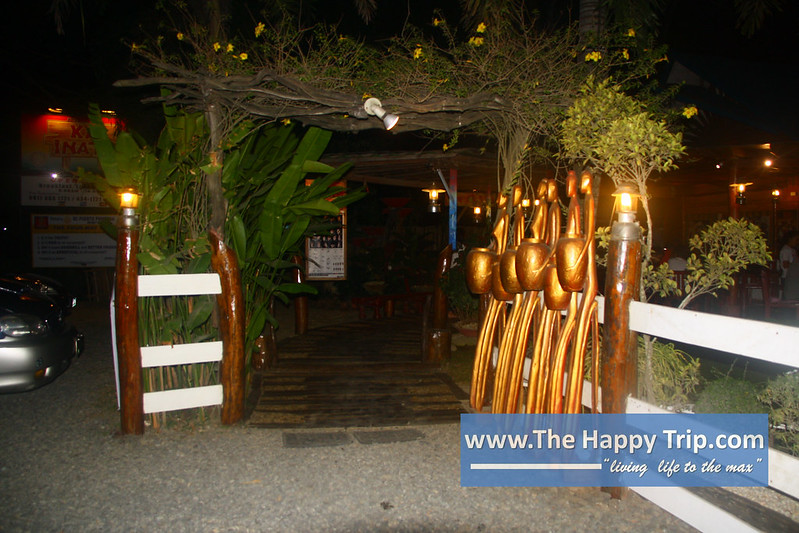 The entance of Ka Inato 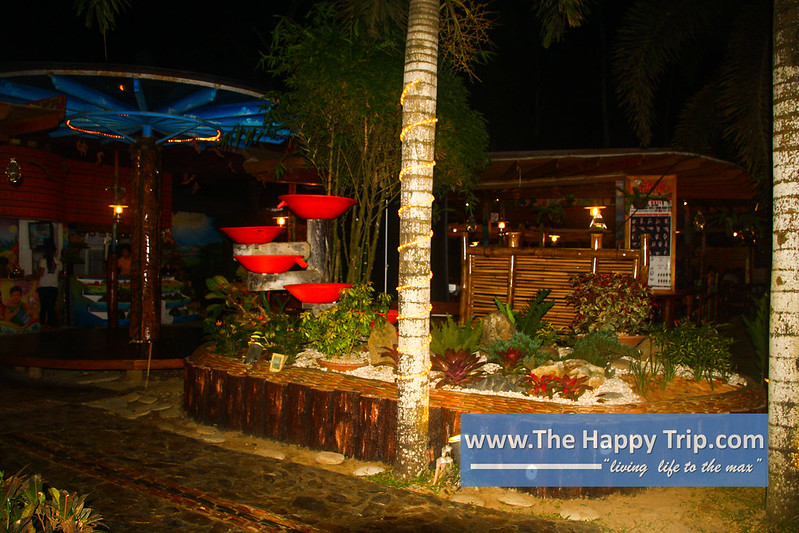