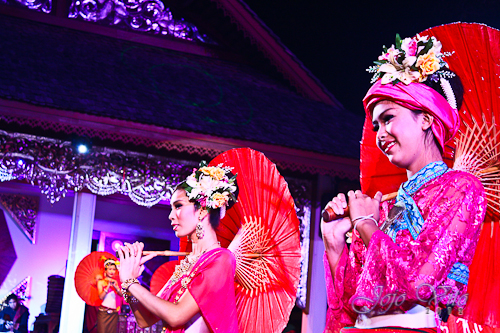 That was my second week in Chiang  Mai and I was quite tired. Our activities were quite draining as we were setting most of the time listening to lectures. But I got excited particularly when we were informed that we will be given a traditional Thai Dinner. Having a short review of the write-ups about Thailand before going , made me much eager and excited for the   Khantoke Traditional  Dinner Show.

It is said that The tradition of Khantoke is more than 30 years old but before it was more of a ceremony presented only to very important guests. The feast is taking place in the cool and dark evening after sunset amid a romantic candlelight and beautiful lanterns. The event reflects a great combination of food and entertainment that brought on the feeling of being treated as an honored guest for most. 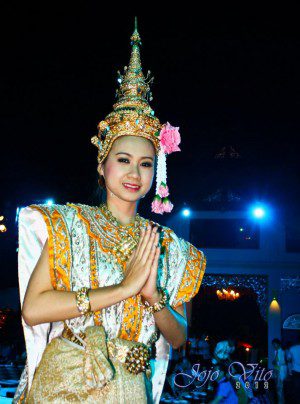 The huge Khum Khantoke in the Lanna Cultural Center is one of the  Khantoke Restaurant to in Chiangmai. Located on the eastern side of Chiangmai on the Superhighway near Carre Four Hypermart the Khum Khantoke in the Lanna Cultural Center . The panoramic Thai  architecture expressing the regal Lanna theme will greet each guests arriving at the place. The soft colored lights on the warm teak bring out a spectacular light show in itself. Visitors can choose either to sit traditional style on the flat floor on pillows with triangle pillow backrest or in an open air sala with wells to rest the feet and legs under the table. 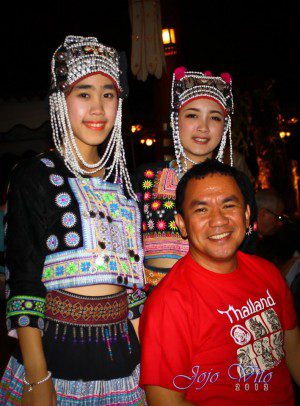 We were  welcomed by some traditionally  dressed staff  and escorted to a  low-set dining table. Plump cushions and backrests ensure great comfort and there is plenty of leg room for guests who choose to sit at tables with “leg wells’ recessed into the floor.

The  moment we arrived we were immediately delighted by the colors and features right at the gate of the restaurant. So before entering we were already taking a lot of pictures of ourselves. Then we went inside …I was amazed at how big the restaurant was. Just like going a temple, we  were asked to remove our shoes before entering the dining area.  It’s good that I always change socks., Lol…..I felt like an Honored Guest at a Khantoke Dinner .

Very prominent at the Khum Khantoke  was the richness of the surroundings – ornately carved teak panels, traditional Old Lanna carvings softly  illuminated to give just the right setting. On the stage is a group of seven musicians, classically dressed and seated in the lotus position, playing the soft melodies of ancient Siam. The central instrument is the Ranad ( a wide, low xylophone-like instrument) with the other musicians spaced around. 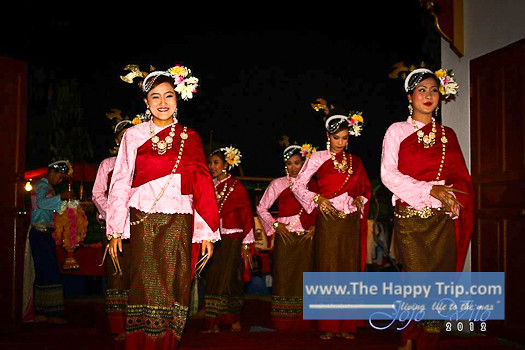 With the rich colors, I saw around I didn’t pay much  attention to  the selection of food. besides , I was already 2 weeks old in Chiang Mai and was being fed with a variety of Thai Food every day.

The food  at the Khantoke Traditional Dinner Show was served by servers in traditional  costume on a Khantoke. A Khantoke is a low tray, atop short pillars, on which the various food dishes are displayed. Khantoke tables come in a range of diameters (from 10 to 50 inches) depending on the number and variety  of dishes for the group’s table.

The dishes at Khantoke Traditional Dinner include the  “Gai Tawd”  a delightful chicken creation , “Gaeng Hung-Lay  a pork and ginger curry  , several steamed or fried vegetable platters, fresh cucumber slices for dipping in “Nam Prik Ong” a mild chilli and tomato sauce  and “Pudt Pugg”  usually a cabbage dish  which goes with  a large bowl of steamed rice and a straw basket of sticky rice great for dipping into the sauces. The Khun Khantoke offers alternative food selections available from an a la carte menu. 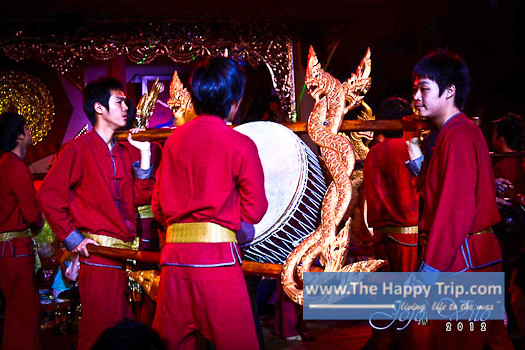 After the dinner, I just stood up and try to look around and start to taking pictures of course. I just noticed a change of beat to the music. Soothing gives way to a soaring and more festive tempo as a line of gorgeously attired Northern Thai dancers come into my view. The girls, and boys wend their way  around the floor-space so everyone also has a perfect view. But I was in the perfect place at that time—at the entrance. I was  mesmerized by the  moves of the dancers as they weave intricate patterns in the air with their hands and describe complex circles of movement with their feet. The music was haunting and soothing. I felt like being transported back through the centuries to the height of the Lanna Kingdom of old.

Khum Khantoke is the first in Chiang Mai to present a scene from the Ramayana drama depicting Hanuman winning the heart of a beautiful mermaid. The sparkles of the costumes and the headdresses were awesome under the colorful spotlights. The monkey god, Hanuman, comes alive moving cheerfully to entertain the audience .This particular sequence ended with the dancers going around to give a photo op for the guests. 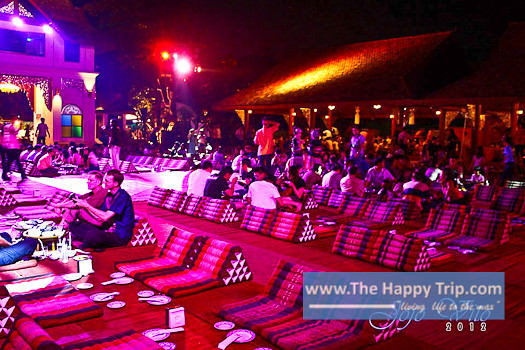 A firework display rounds off the evening. As visitors leave, they get a chance to launch a giant Kome Loy lantern, a kind of hot air balloon.

To avoid disappointment reserve in advance by calling the Khum Khantoke at Tel. 304121-2 early in the day. 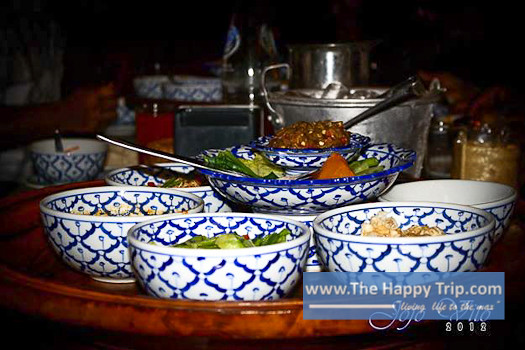