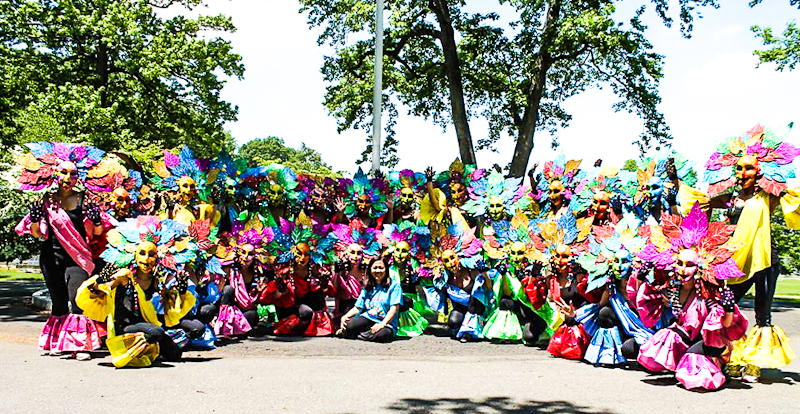 Also called as Parada ng Kalayaan, The Philippine Independence Day Parade is a celebration for the Filipino American community in the Northeast United States, home to more than half a million Filipinos. Its main purpose is to create awareness of Philippine culture and to raise funds for charity projects in the USA and the Philippines. Philippine Independence, as a celebration in America, is largely an invention of the last decade—rather than having distinct cultural significance, the event is instead manufactured as a cultural awareness campaign.

United Bacolodnons during the grand parade

The Bacolod MassKara Festival-NY Edition joins the New York Philippine Independence Day Celebrations for the 2nd time. With an awesome performance last year, and a more electrifying performance this year, the group is well on its way to become one of the main attractions of the event held every 1st Sunday of June in the streets of Manhattan, New York. The group is really amazing with more than 30 street dancers in colorful costumes, by far the most number of choreographed performers in the event. (Jonee Pabiania)

The successful Philippine Independence Day Parade  particularly the Bacolod Masskara Festival NY Edition was a testimony of every Filipinos love for country, “family power”, spirit of unity and gusto for life. I can’t help but share the pride and victory displayed by my fellow Bacolodnon and Negrense as I look into the videos and photos of the 2013 Bacolod Masskara NY Edition.

Though our participation is just limited in the creation of their mask and costume, The Jojo Vito Designs Gallery Staff’s spirit was always with them and our hearts beams with pride each time we see the pictures posted in Facebook with participants wearing our masks. Our heartfelt thanks to Nestor and Imelda Gargarita for trusting us with the Masks and Costumes. Hope to still work with you in the future parades.

The colorful masks worn by the dancers were all hand painted with a tribal designs or we called it dynamic lines. The lines symbolizes Filipino’s flexibility and dynamism.
The Colorful “Foliage” Headdress is a symbol of “green” life in Bacolod and Negros province in general. We thought of using foliage in the headdress simply because , Negros is an agricultural province – also known now as an “organic” province. The design were created with consideration of the means it will be transported from Bacolod to US.

For acknowledgments , please feel free to write in the comments box below.