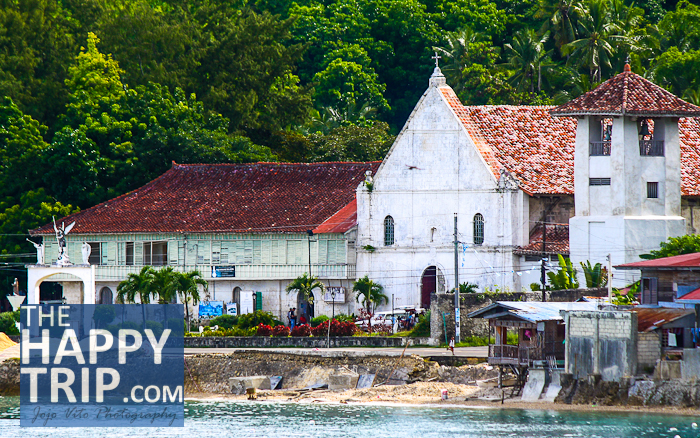 The more than 400 years old  Church of Patrocinio de Maria in Boljoon is one of the historical  treasure which Boljoon is really proud of. So upon checking in at The Cebu Club  Portmed Resort where we stayed for 4   days, I  immediately  asked my companions to visit the famous historical church.

From the resort, we took the Tricycle going to the church. I took the back seat for me to take more photos while in transit.

When we arrived at the church I immediately start taking pictures. Visually the church looked   really rustic. I seemed to feel that any repairs made in the past haven’t changed its original look. The Church of Patrocinio de Maria  of Boljoon is said to be one  which best gives one a sense of the Philippine colonial past.

The Church of Patrocinio de Maria in Boljoon is a genuine showcase of old and complicated carvings and adornments.

It was late when we first  visited the church so we were not able to get inside, so  on the 4th day of my Boljoon visit, I went back to the church to see the interior of the historical church.

On my second visit I had the opportunity to have a short  discussion with the elders who were sitting at  the entrance of the convent. They were part of those who maintain the church so they were able to give me substantial information.

Still standing great after more than 400 years, the Church of Patrocinio de Maria of Boljoon is the oldest remaining original   church in Cebu and is relatively well-preserved. It was declared for conservation and restoration in 1998. The Church of Patrocinio de Maria has a pseudo-baroque  rococo style  and is made of coral stone. It was quite amazing upon entering the convent seeing that I was literally stepping on big blocks of corals.

I also had the opportunity to go up the convent. Even the convent’s ceiling  is also painted and adorned by a glass chandelier. I was so disappointed because I don’t have a wide lense with me so I cannot really capture a relatively wide space.The intricate carving on wood as shown in the stairways in the convent showed creativity and craftsmanship of the natives way back then.

One of the most unusual tower and  it looked more like a fortress. Its has a rectangular belfry and said to have been built in 1701 and is still present up to now. The tower has four windows where the cannons were shown to defend against Muslim pirates. It was said that the sound of its silver bells supposedly reached Oslob and Alcoy (southern most town of Cebu), but in 1802, they were stolen by Muslim pirates led by Datu Orendain. Because of their weight, the Moro vinta allegedly sunk. The bell was never recovered.

The tower now serves as a belfry for the church.

.Escuela Catolica was established in  1940, the structure has a rectangular plan with a formal symmetrical façade.

Adjacent to the  Church of Patrocinio de Maria in Boljoon is the Boljoon Escuela Catolica. As shown in the  building, Escuela Catolica was established in  1940, the structure has a rectangular plan with a formal symmetrical façade.     The concrete double grand staircase, Wood relief ornamentation  and intricate callado works  dominate  the façade of the building.

It is said that the building was used to be a dormitory for children taking their first communion who were required to stay at the Escuela the night before taking the Holy Communion. It was used as a school for religious teachings and for a time was a primary school. It now serves as meeting place for the Parish’s various religious groups.

The more than 400 years old  Church of Patrocinio de Maria in Boljoon is one of the historical  treasure which Boljoon is really proud of.

How To Get There:

From Cebu City: Go to the South Bus Terminal located at N. Bacalso St. near eMall and look for buses the ply the Oslob or Santander route. Tell the driver your destination, which is Boljoon. The fare is around P129 one way for an airconditioned bus. Travel time could take up to 2.5 hours.