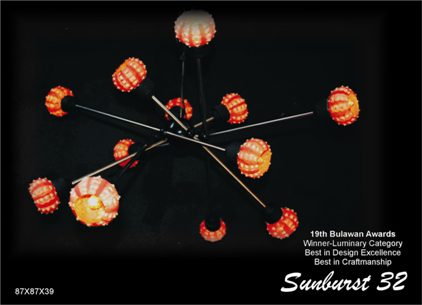 “Sea Urchin Lamp by Vito. Winner for the Association of Negros Producers’ 19th BULAWAN AWARD  for Luminary Category; Best in Design Excellence and Best In Craftmanship”

Sea urchin is one of the major shellfish resources all over the world. In the Philippines, its commercial culture is still in its developing stage It was in fact started primarily as a resource enhancement tool to address the severe depletion of the resource due to excessive gathering of wild stocks. An obscure cousin of the starfish, sea urchins live in shallow marine waters with its gonads or roe as its only edible part. In Japan it is regarded as a delicacy called the “uni”, and is also considered as an exotic food all around Southeast Asia and the United States.

Locally known as “maritangtang” in the Ilocos Region, “kuden kuden” in Bolinao and “tuyom” in the Visayas, the initial grow-out culture of sea urchins was undertaken through sea pens at Brgy Nalvo, Sta. Maria, Ilocos Sur in 1998. In the same year, the promotion of community-based grow-out culture was started in Bolinao, Pangasinan and several verification trials were also conducted in suitable areas of Ilocos Norte and La Union Thereafter, technology innovations to improve culture methods were demonstrated and promoted for adoption. 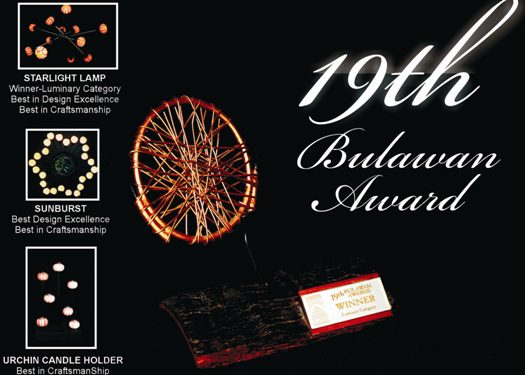 Sea urchins ‘ shells are also used for its ornamental  value. It was in one of my visit in Cebu four  years ago,Where  I saw these beautiful sheels of sea urchin. I didn’t know what to do at first. nonetheless, I asked my supplier to send me a box of these shells. I just stocked the shells for a while, until the Bulawan Award Competetion of the Association came. I made a table lamp made of original sea urchins. it didn’t win an award but the sea urchin lamp was sold like hotcakes at  Rockwell  in The Association of Negros Producer’s 23rd  Negros Tradefair–that  was the beginning of my love affair with the sea urchin.

With the ongoing demand for a sea urchin products, I decided to develop products with are urchin look alike but these time made of fiber glass. With the fiber glass, we can make several items on a uniform shape and sizes.

Vito’s Sea Urchin Home Furnishings are now available at the :