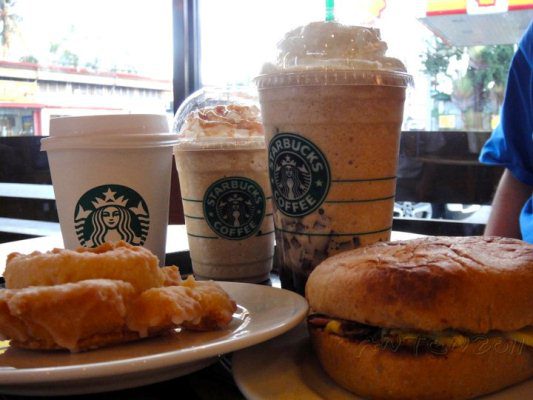 IMPRESSED BY THE STARS OF STARBUCKS ILOILO

I was invited by Ilonggo Producers Association (IPA) to speak at their General Assembly Meeting at Moon Cafe in Iloilo City . I was fetched by Ms. Val Maravilla, the president  of IPA from the sea port and we arrived at the venue quite early. So went first to Starbucks for a cup of coffee   for her to give me more background of the association.

We had a very nice conversation but I was receiving some calls in between so I just put my cell phones on our table. After a while, we decided to transfer to Moon Cafe as members of IPA started to arrived.

The meeting had begun and I  was still receiving some text messages from home in my Sun Cellular phone.  That was after an hour already that I realized that my other phone was missing. So I made a call from my other phone to check where it was. I was just thinking that it was just inside the room. After few seconds somebody answered my call from my missing phone.—It was from Starbucks.

They kept my phone when they saw  that I left it on the table when we leave. Immediately, I went back to the store and they gave it back to me. The girl who gave me back my phone was Belle.I was so impressed simply because anyone can just keep it. But they do answer my call, just a simple manifestation that they have no interest on it. I forgot to ask who found my phone. I even forgot to take their pictures for this post as I was rushing to get back to the meeting. Nonetheless,  I would like to  thank you to all the staff of Starbucks Iloilo, they were all indeed “Stars” of Starbucks!