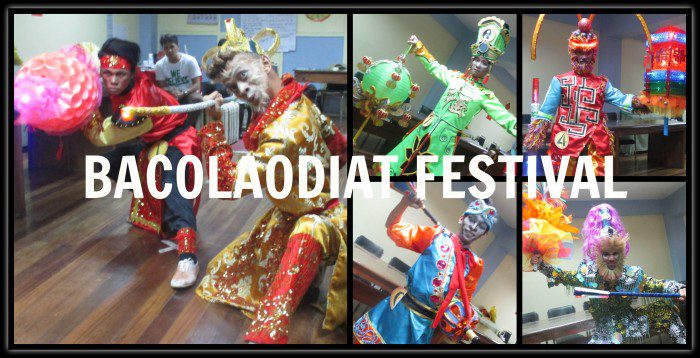 FESTIVALS IN THE PHILIPPINES (FEBRUARY)

One of the newest, most colorful and getting bigger each year festival in Bacolod is the Bacolaodiat Festival which is being celebrated as a way to celebrate the Chinese New Year.

Filipinos do respect the Chinese community. During the last few years, the Chinese New Year has been considered a national holiday. I think this fact speaks for itself. I bet you know the Dragon dance because it symbolizes the start of a Chinese new year not only in China but in Philippines as well.

Babaylan Festival  is held every 19th of February in Bago City, Negros Occidental. The public gets a rare view into the simulated rituals of mystics, ancient healers and priests in various ceremonies such as marriage, healing and harvest.

Date 2013: Saturday, 2 February
Thousands of devotees gather at the Jaro Cathedral in Iloilo to celebrate the feast of Nuestra Señora de la Candelaria. It is one of the most lavish religious spectacles in the country. The feast starts with the blessing of the candle and continues with a procession of Nuestra Senora de Candelaria, the patroness of the festivity.

Date 2013: Tuesday, 26 February
Occasion: This festival is celebrated during the foundation day of the Sibugay province. Sibug-Sibug festival is another colorful parade of cultural treasures. Experience street dancing, ethnic rituals illustrating good harvest, wedding, and healing rituals. It usually lasts for two weeks. Have you ever tasted the world-famous oysters of Sibugay? No, then this is your chance.

I am sure that there still more Festivals held every February which are no included here. Please feel free to leave your comments and information here. Have a Happy Fiesta!