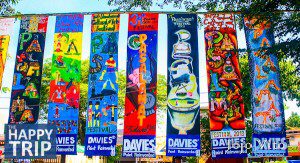 The scrolls ready for judging

This is really hot summer and festivals are everywhere.

One of the most colorful and fun festivals in the province of Negros is La Carlota City‘s Pasalamat Festival. Aside from  drum beating and their famous Mardi Gras, the city also holds visual arts competition.

This is my second year to act as judge in the visual arts competition.One of the most difficult to judge   is there “RolloY Pinta” or the Scroll Painting Contest. Difficult, simply because the scroll are displayed in their plaza and we have to judge around 33 beautiful entries under the heat of the scorching sun. Of course, the La Carlota City staff would offer to hold the umbrella for us but I refuse because I am taller than them and I know it would be difficult.

There are two categories in Scroll Painting contest: Elementary which was participated by five students for each entry and 3 artists per entry for the Open category. All contestants work around the theme of “Letras Y Figuras”.

The City of La Carlota is geographically located at the southwest portion of central Negros Occidental. It is bounded on the north by the City of Bago; the mountain ranges of Kanlaon Volcano in the east, the town of La Castellana in the southwest; the town of Pontevedra in the south and the town of San Enrique in the west.  It can be reached by bus or by jeepneys travelling from Bacolod City.