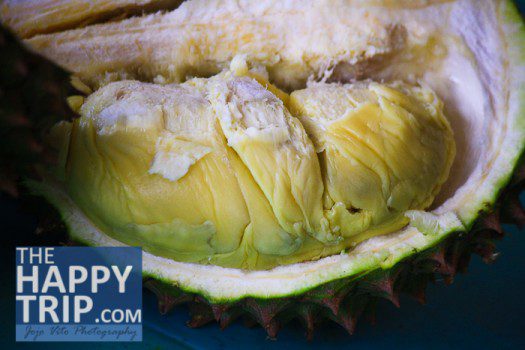 When Mel asked me if I wanna  join the food tour she is organizing I readily said yes. By just the title of the event, it was already exciting.

Mel’s Davao Food Tour is   a   5 to 6  hour tour covering breakfast, lunch and coffee in different venues ,all located  within the City of Davao.

We meet at “Bahay ni Tuding”,  a hotel where we stayed on our 2-day Davao weekend escapade. There were four of us joining the food tour, Reno a nurse who has been in London for quite some time and his sister Gerlie who is also an Ilongga and Oji   a fellow  blogger. The tour started with a short orientation given by Mel who also served as our  tour guide .

For a start, Mel  gave us a native Bayong with bottled water inside. When I saw the native bayong, I told myself , “this will be a different tour”. And so it was! From Bahay ni Tuding Mel let us took the jeepney going to our first stop. The “jeepney ride” component I’m sure would be of great part  especially for foreigners . 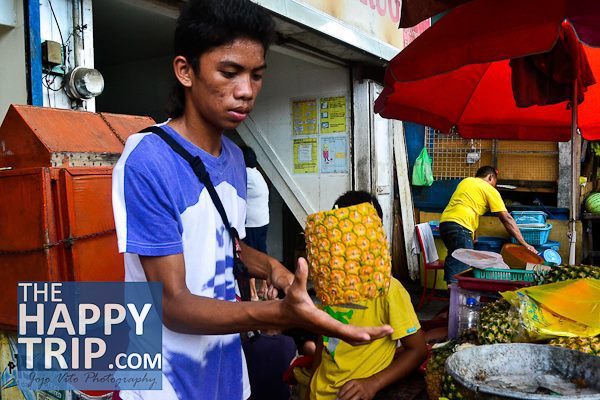 Our 1st stop was the Bangkerohan Public Market which is just a few minutes from the hotel. The first event was the   Davao’s Pineapple Samurai. Mel took pride of introducing   the art of slicing pineapples in less than 30 seconds from a complete whole fruit into chunks. The vendor  poured the chunks pineapple in a plastic bag container without touching the meat of the fruit. He was skillful indeed! Davao is known for their fruits especially their duran, pomelos, mangosteen, sweet pineapples, etc. 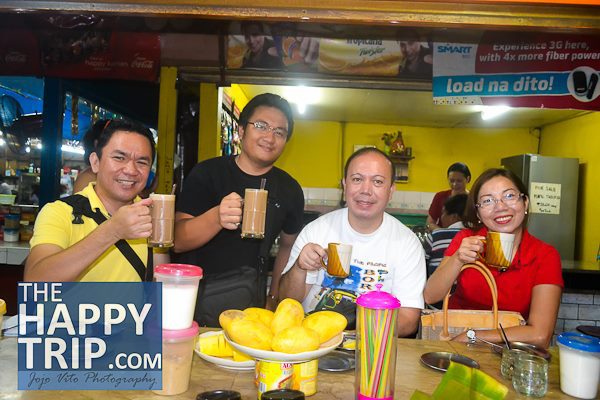 Just a few meters from the fruit section of the  “Palengke”, Mel brought us to the next feature of the tour – my favorite, the  Kinutil breakfast. The scene in a palengke was very common in most markets where you see a “kapihan” section where people gather to drink coffee along with some “kakanin” or native delicacies.

Bangkerohan  has a specialty which they called “Kinutel”.Kinutel is   chocolate drink laced with tuba (coconut toddy) with a mixture of raw egg. When I heared ,”Tuba” I got excited. I never thought that I will be taking a concoction of  “tuba” and egg  early in the morning. I got worried a bit because my stomach might not welcome this concoction . Nonetheless, I have to try it! The taste of tuba mixed in hot chocolate seemed quite strong. Well, I did not noticed the taste of the egg anymore. 2 of the participants just opted for hot chocolate as they cannot tolerate the taste of Tuba. The kinutel was paired with “Puto Maya”, a sticky rice cooked in coconut milk. Of course we also ate the pineapple we got earlier .This part of the tour is “a must” (I suppose) as this is a reflection of an old Filipino/countryside tradition . 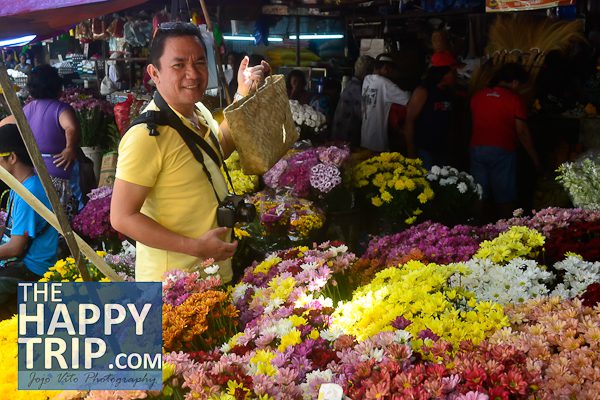 .At the flower section with my Bayong

After breakfast, we brushed  the flower stalls to inspect and  appreciate  Davao’s local flowers.  Mel, boasted that Davao has a cut flower industry exporting orchids and other ornamentals which is highlighted annually by the Kadayawan Festival, a festival which is already part of my bucket list. 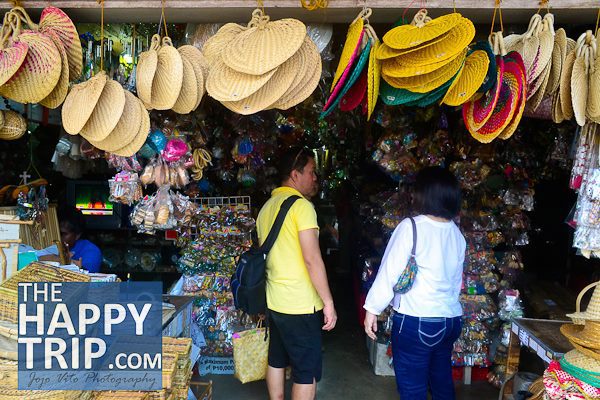 Checking Bohol Handicrafts
After a while we took the jeepney again going to our next destination the Magsaysay Fruit Stand to taste one of  Davao’s symbol, the Durian fruit. But along the way we passed by Aldevinco and Mel decided to bring us there should we want to buy some souvenirs. We also pass by Bohol Handicrafts, which I visited again late on the same day to buy some materials for a product development I am doing  for my  Gallery back home. 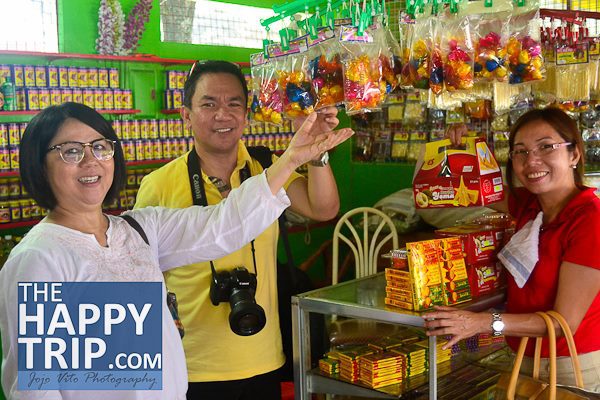 After shopping, finally, the Durian eating. Unlike other guests, I love Durian. The Magsaysay Fruit stand also sells other pasalubong items, so I decided to buy some sweets for the people way back home. After a while Mel, invited us to browse the Magsaysay Park. From the Park you can see the Samal Island, which was our destination the following day (not included in the tour of course). 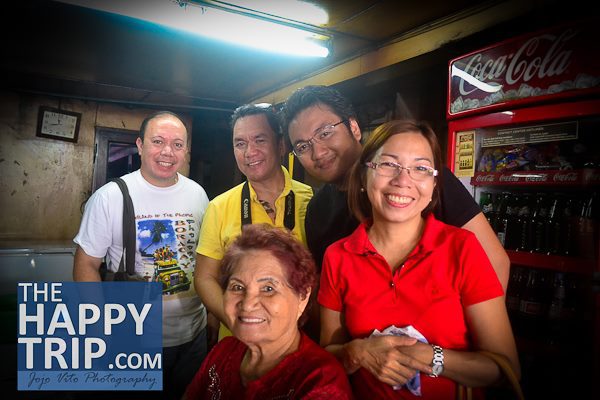 With Nanay Luz of Luz Kinilaw

A few meters from Magsaysay Park, Mel brought us to Davao’s famous “Luz Kinilaw”. The place is famous in Davao for their grilled tuna and kinilaw of  course. We were lucky to meet  Nanay Luz, the owner  who claimed to be  in the business for more than 45 years already. She  showed us some photographs of the  celebrities  and public figures who visited her including former Pres. Joseph Estrada.  When I tasted the tuna we bought from Luz , it was indeed good. Unfortunately the environment in Luz Kinilaw isn’t nice and not gastronomically appealing. So Mel just opted  to buy a grilled tuna . We went back to Bahay ni Tuding for our Lunch. Still included in the package of Mel’s Food Tour was  the  lunch consisting of rice, grilled Tuna collar (grilled tuna), veggie stew (law-uy) and raw fish (kinilaw). The Law-uy was  familiar to me as we have  our own version in Negros of this dish,the “laswa”. 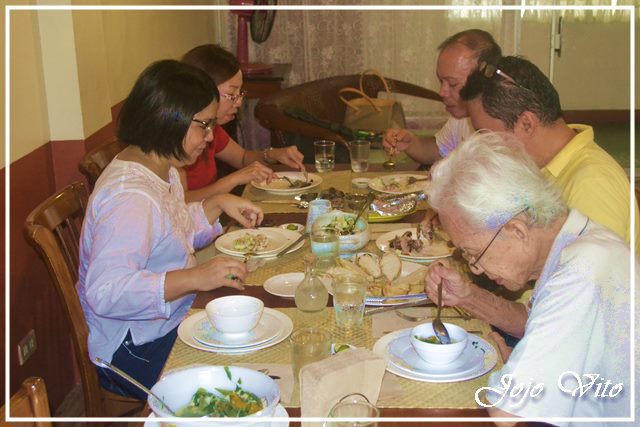 With the owner of the eatery, Nanay Luz

After we enjoyed  our lunch , Mel invited us to our last stop, the Durian Ice Cream at the Crocodile Park. At the park, they offered a variety of  flavor of ice cream. In as much that  I  seldom eat ice cream because of my sugar issue  I decided to be more daring with this indulgence.  I tried the Durian Ice cream with Crocodile Egg. Well, if you’ll ask me what’s the taste of crocodile  egg–I don’t know…I can’t tell anymore as the strongest flavor that I can remember   was the durian which I liked so much because of its texture.
I found the tour    to be very interesting . I guess its Mel’s personal touch which made the tour exciting. I suggest you try it too along with your friends. 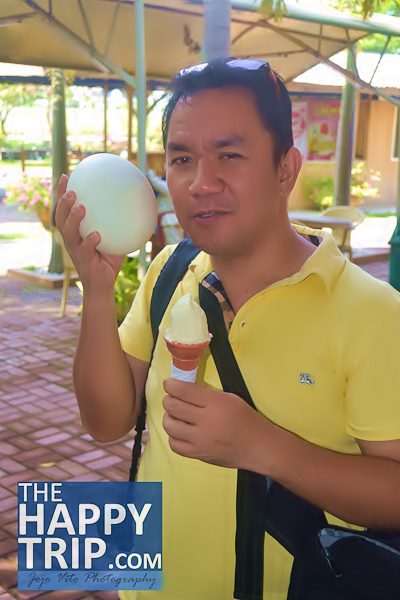 The Finale :Durian Ice cream with Crocodile Egg at the Crocodile Park

HOW TO GET TO MEL’S DAVAO FOOD TOUR

NOTE – meeting place for the tour is at Bahay ni Tuding Inn and Resto. The hotel is NOT visible from San Pedro Street. There is a driveway beside Mercury Drug. Take that driveway and the hotel is neatly tucked inside a private compound