Palangga is a vernacular term for Beloved.

“Palangga” (Beloved)  can be a  person who loves or is dearly loved; or used  as a term of endearment.  It can refer to an emotion of a strong attraction and personal attachment. It can also be a virtue representing human kindness, compassion, and affection—”the unselfish loyal and benevolent concern for the good of another”. It may also describe compassionate and affectionate actions towards other humans, and even to oneself.

More than 30 Art Works executed in Paintings and Relief Sculptures will be displayed in the exhibit. These pieces are  an expression and interpretation of the different kinds of   Love: Eros ( physical passion; its gratification and fulfillment); Familial (natural bond between mother and infant, father, children, and kin); Phileo (love of the affections and friendship) and Agape .These kinds of love were interpreted in subjects like Mother and Child, Father and Son, Family , Sisters, and opposite sex.

*Mother and Child themed Pieces.In honor of the great women in most people lives, the “mother” . To many people ,mother’s loved is the first love one had  experience and perhaps one of the most unconditional, strong and faithful.

*Father and Son themed Pieces. These pieces  display the strength, discipline, wisdom and love that   fathers have   for their children.

*“Family themed  pieces” – defines the importance of A family in ones life;   sharing common goals, values, and beliefs, a place where we get unconditional love and support . Family could be one of life’s greatest blessings.

Some award winning furnishings of Jojo Vito Designs Gallery will also be displayed during the exhibit as accent pieces. These items were specifically designed/dedicated by the designer to his “Beloved”, hence the inclusion in the exhibit. 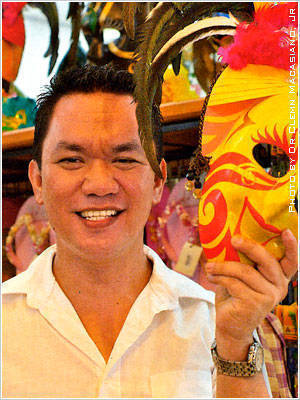 Jojo Vito .Known  for his masks, is a  designer of   of his  own  business-Jojo Vito Designs Gallery . Now exporting some of his works  abroad. He has received quite a number of recognition in design excellence; and was recently recognized by the City of Bacolod in the Field of Visual Arts. A  PhD in Business Management; Management  Consultant ; Graduate School Instructor and Social Entrepreneur.

Arthur Bayes   is the  Senior Pastor of  Geo Evangel Missions, Inc.A graduate of  B.S. Architecture, LCC- Bacolod and   Masters in Biblical Studies – Asian Theological Seminary, Bacolod City.   He is one of the Founding Members of Art Association of Bacolod- Negros (AAB) and the Founder of   Christian Artists Negrense Visual Arts Society (CANVAS). Held countless, group and one-man-shows and was recognized recently by the City of Bacolod in the field of Visual Arts.

Miriam Bayles. A pastor’s wife and also a Preacher. A  Teacher , Visual Artist,Creative Writer. She is the founder of  BABAYI Artists Group . Recording Artist/Composer of some  Original Gospel Music; she has written scripts for playwrights and children’s books and published by New Day Publishers. She was recognized recently by the City of Bacolod in the fields of Literature.

To bring art closer to the people and to help other artist have a venue to showcase their art pieces. and hope to inspire other artists to press on to their dreams.

“Palangga” Art Exhibit  will be open to the public for free. For the first three days (March 25 to 27,2014)The exhibit  will be displayed at the center of Metrodome, Center (24 hours) .Thereafter it will be transferred inside Jojo Vito Designs Gallery (the same building).

For your friends visiting Bacolod during the  Panaad Festival, make their visit to Bacolod complete by dropping by in the exhibit . Artist can meet up with guests personally.