Elegant…Expensive…These were my first impressions when I visited Kabarra Cafe located at the Billboard Complex, BS Aquino Drive Corner, Lacson St., Bacolod City. I had been wanting to visit the restaurant  in its former location near West Negros University, but for some reasons I was not able to materialize the plan. Until lately when Chan-chan Torres a co-blogger and co-writer at TopOnMyList.Com, PinoyBisniz.Com, and TheHappyTrip.com arranged the visit.

yours truly with Chan-chan Torres and the owner of Kabbara Cafe, Ms. Mariam Dingcong-Kabbara

When I arrived at the place, Chan-Chan was already waiting for me. I was quite surprised when I got into the main restaurant. Kabbara Cafe was furnished  with velvet sofas and other nice furniture which were visually pleasing and very comfortable. Not really that intimidating, but some customer might think that their food was really expensive. But upon seeing Kabarra Cafe’s  menu book, I realized their offerings were all affordable and reasonably priced.  Kabbara Cafe has an alfresco dining area located right in front of the restaurant.

A beautifully prepared Pomelo salad and Three Appetizers were already served  even before I arrived. Hungry as I was, I immediately find my place and went sample the offerings.

The Pomelo Salad was very refreshing, it has some fresh cucumbers, lettuce, tomatoes,onions and other veggies.  For the price of PhP 185, the salad can already be shared by 2 to 3 person.

Then there were the three Appetizers composed of Hummus, which was made of creamed Tahini (sesame paste);Baba Ganush, a Levantine dish of cooked eggplant mixed with onions, tomatoes, olive oil and various seasonings and the Moutabel a dip like hummus made of spicy eggplant. Of course, these dips- appetizers were a perfect pair with the pita bread.

While other dishes were being served, the owner Ms. Mariam Dincong Kabarra went out to meet us.  We were friends on Facebook for a long time, but that was my first time to meet her in person. Friendly and unassuming, Mariam Dingcong  Kabbara proved to be a very cordial host. She  even let me talk to her Lebanese husband who is now based in Saudi Arabia. 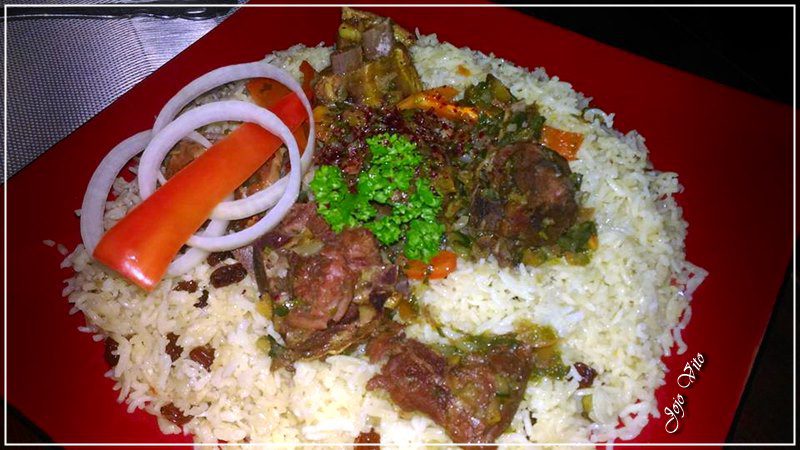 a must try dish at Kabbara, Kabsa Lamb

While were we were enjoying our salad, the main course came, the Kabsa Lamb . Kabsa  is a family of mixed rice dishes that originates from Saudi Arabia, where it is commonly regarded as a national dish. Kabbara Cafe used basmati a long-grain rice, which they imported from Lebanon. They even added some raisins which I really like because of its sweet taste.The spices used by Kabbara Cafe in their in Kabsa  were toned down to suit the palate of Filipinos. I tasted  black pepper,   cardamom, and  bay leaves among others . A very  tender and flavorful lamb meat accompanied the Kabsa. Kabbarra’s Kabsa Lamb was  pegged at PhP425 but the serving was really huge and it can feed for 2 to 3 persons.

Most of the ingredients used by Kabbara Cafe were imported from Lebanon to achieve the authentic Mediterranean cuisine taste.  They have a wide array of selection in their menu. Here’re other offerings we tried on our  visit.

Warak enab. A  rice wrapped in a   grape leaf laced with fresh lemon and parsley, and a smattering of tomatoes and green onion.

Chicken Arayes is a  grilled pita bread sandwich filled with minced chicken meat, tomatoes,onions, parsley and a melody of spices.

Sweet Lassi (white colored drink)   a popular traditional yogurt-based drink. Instead of using some spices,sugar, and milk were added to suit the local taste.

Vimto is a juice/ soft drink originating from England. It contains the juice of grapes, raspberries, and blackcurrants  ), flavored with herbs and spices.

Baklava rich, sweet pastry made of layers of filo filled with chopped nuts and sweetened and held together with syrup or honey.

Date Bar is a nice pastry which has, of course, dates   oats and cinnamon.

We really enjoyed our visit at Kabarra Cafe,but don;but take our word for it come and try their food. For more information, you may call 0949 763 5377.

with my co-blogger, Chan-chan Torres at Kabbara Cafe