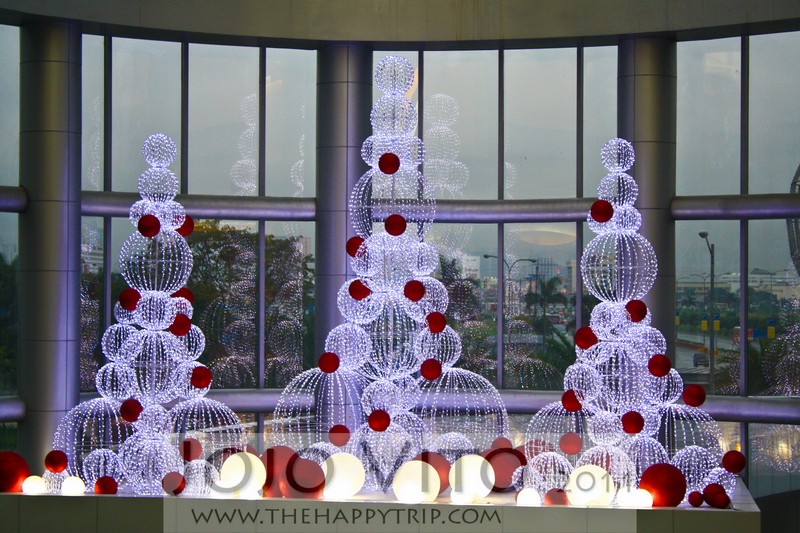 Christmas  is one of the biggest holidays in the Pihilippines  and the Philippines perhaps is one country who would celebrate Christmas the longest  with Christmas carols heard as early as September and the season lasting up until   January 9 or the Feast of the Santo Niño held every third Sunday of January.

Christmas Practices in the Philippines 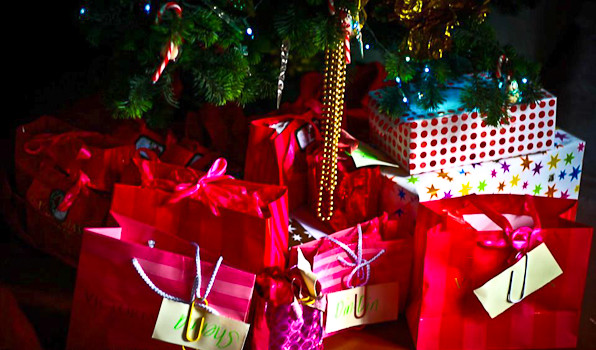 If you think of Christmas , once can never forget about  gift  giving. Filipino would normally set a budget for their children, nephews and nieces and even godchildren. This is the most awaited time for the kids at home. I can see the facial expressions when they open the gift especially when they see toys. That’s why for this year I will just give toys for the kids and for adults maybe just a hug.Lol.

During this season even company would give out corporate giveaways to their patrons. Relative abroad would normally send Balikbayan boxes for their loved ones in the country. 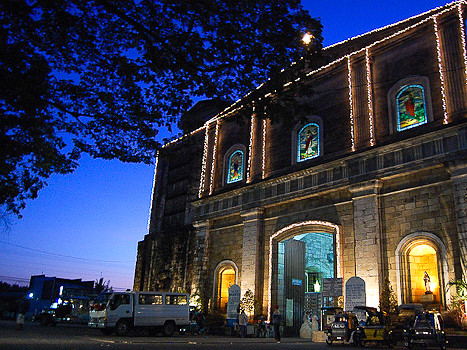 For  the catholics  Christmas Day    is ushered in by  the Misa de Gallo (“Rooster’s Mass”) in Spanish and in Filipino as Simbang Gabi, or “Night Mass” a nine-day dawn and night masses that start on December 16.  In some parishes, the Simbang Gabi begins as early as three o’clock in the morning and another one at eight o’ clock in the evening After hearing Mass, Filipino families partake of traditional Filipino holiday fare sold outside the church, either within the church precincts or during breakfast at home. Vendors offer a wealth of native delicacies. In   Bacolod City bibingka (rice flour and egg-based cake) is a common scene outside the church, cooked using coal burners above and under);In other parts of the country,  putò bumbóng (a purple, sticky rice delicacy steamed in bamboo tubes, with brown sugar and shredded dried coconut meat is also very popular). These delicacies are usually taken with hot chocolate or native coffee.

Some   Evangelical Christians and other independent denominations have adopted this practise by holding similar early morning services. 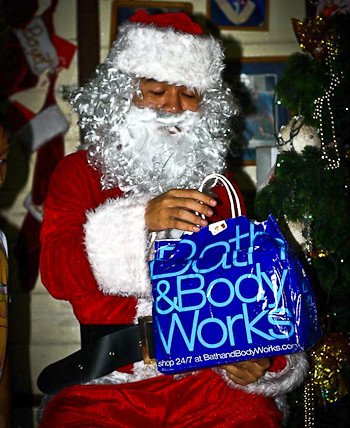 My Nephew wearing Santa in one of our Family Christmas Party

Christmas parties are now held as early as first week of December. Common activities include Monito/Monita or Kris Kringle, song and dance numbers competition,  and  parlor games and of course raffles of door prizes are very famous especially in the corporate world.

For many Filipinos, family must  gather as one  to celebrate   Christmas Eve (“Bisperas ng Pasko“) on December 24. Christmas Eve  is celebrated with the Midnight Mass, and immediately after, the much-anticipated Noche Buena – the traditional Christmas Eve feast.  It is in this occasion that lechon (roasted pig)  become an integral part of the celebration. Many families would wait until 12midnight before they open the gifts under their Christmas trees. 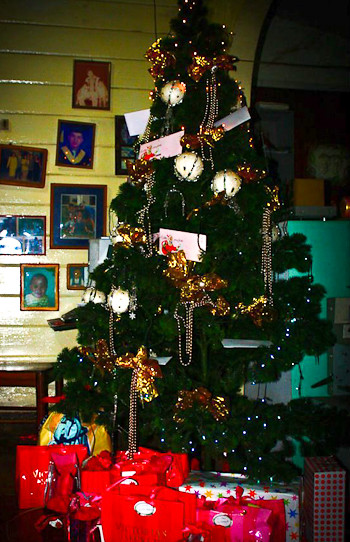 Christmas Day in The Philippines is primarily a family affair.  Preferably in the morning, Filipino families visit members of the extended family, notably the elders in order to pay their respects. This custom of giving respect has been an age-old tradition in the Philippines called “Pagmamáno“; this is done by bringing the elder’s hand to one’s forehead, while saying Máno Pô.     Children would normally go to their godparents to ask for their Christmas gifts. Many Filipinos would spare a budget for the godchilden  or “ina-anak” in tagalog during this season.

Many family reunions, weddings and even baptism are also  set during Christmas day. 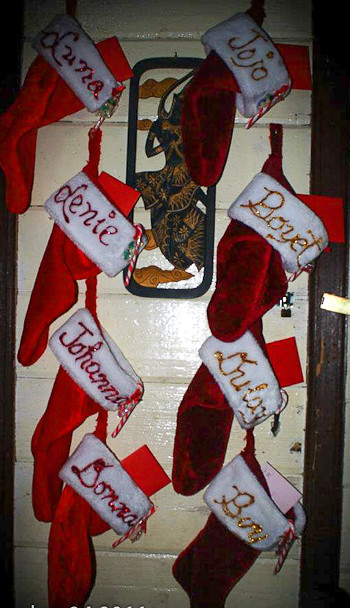 When were kids we would hang our very own socks hoping for Santa to come.Seeing these Christmas  socks hanging in our door  with our names in it ,brings a smile in my face

Niños Inocentes is commemorated on December 28 as Holy Innocents’ Day or Childermas in other countries. The innocents referred to are the children who were massacred by order of Herod, who was seeking the death of the newborn Messiah. Filipinos celebrate the occasion doing pranks to one another, similar to April Fool’s Day and readily admits “Na-Niños Inocentes ka.” once called out. One of the most widely done sinister pranks on this day is to borrow money without the intention of paying back. Victims are usually helpless in getting remuneration from the offender, and are instead forewarned not to lend money on this day.

Like the Christmas Eve,  New Year’s Eve (“Bisperas ng Bagong Taon”), celebrated during December 31 majority of the Filipino families would gather for the Media Noche or midnight meal – a feast that is also supposed to symbolize their hopes for a prosperous New Year. In spite of the yearly ban on firecrackers, many Filipinos in the Philippines still see these as the traditional means to greet the New Year. The loud noises and sounds of merrymaking are not only meant to celebrate the coming of the New Year but are also cast out malevolent spirits.  Folk beliefs also include encouraging children to jump at the stroke of midnight so that they would grow up tall, displaying circular fruit and wearing clothes with dots and other circular designs to symbolize money, eating twelve fruits at 12 midnight for good luck in the twelve months of the year, and opening windows and doors during the first day of the New Year to let in the good luck. 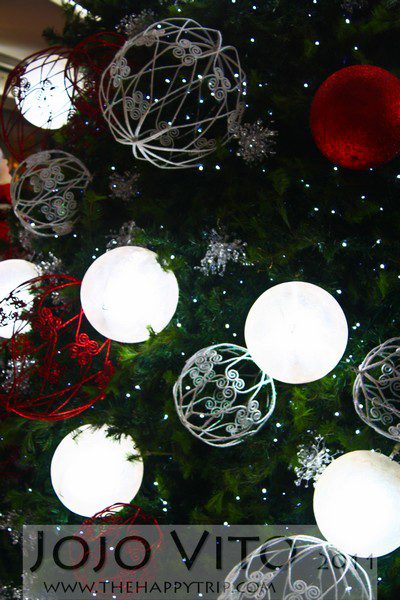 The Filipino Christmas would not be complete without the traditional Philippine Christmas symbols and decorations. Christmas lights are strung about in festoons, as the tail of the Star of Bethlehem in Belens, in shapes like stars, Christmas trees, angels, and in a large variety of other ways, going as far as draping the whole outside of the house in lights.  And what is more iconic of Christmas celebration but the Philippines famous Parol. 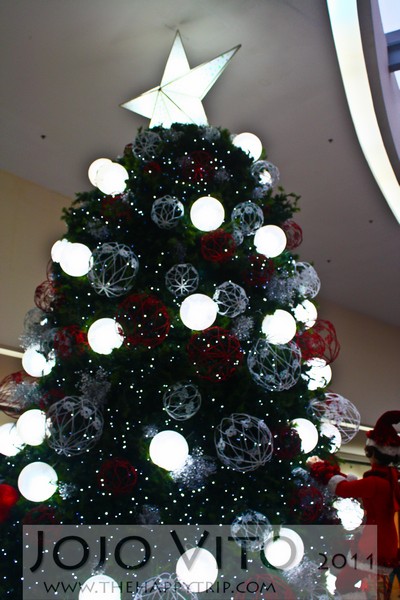 Though not strictly a custom, every Christmas season, Filipino homes and buildings are adorned with beautiful star lanterns, called parol (Span. farol, meaning lantern or lamp-Merriam Webster – English English- Spanish Dictionary). The earliest parols were traditionally made from simple materials like bamboo sticks, Japanese rice paper (known as “papel de Hapon“) or crepe paper, and a candle or coconut oil-lamp for illumination; although the present day parol can take many different shapes and forms.   The parol is also traditionally made of lacquered paper and bamboo, but others are made of cellophane, plastic, rope, capiz shell and a wide variety of materials. Making parols is a folk craft, and most Filipino kids have tried their hand at making a parol at one time or another, maybe as a school project or otherwise. The most basic parol can be easily constructed with just ten bamboo sticks, paper, and glue. 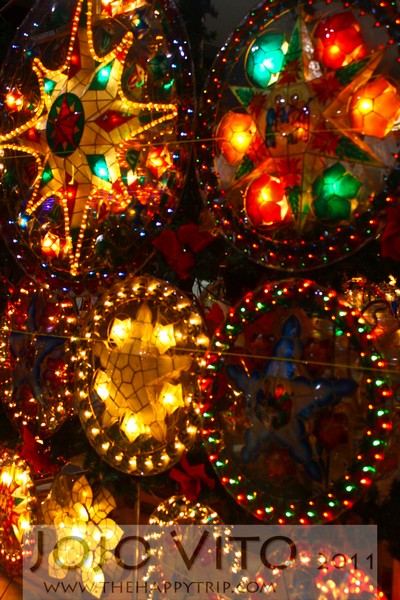 Another traditional Filipino Christmas symbol is the belen — a creche or tableau representing the Nativity scene. Derived from the Spanish name for the town of Bethlehem, Belén, it depicts the infant Jesus Christ in the manger, surrounded by the Virgin Mary, St. Joseph, the shepherds, their flock, the Magi and some stable animals and angels. Belens can be seen in homes, churches, schools and even office buildings; the ones on office buildings can be extravagant, using different materials for the figures and using Christmas lights, parols, and painted background scenery.

In the Philippines, children in small groups go from house to house and even in the street singing Christmas carols, which they called pangangaroling. Makeshift instruments include tambourines made with tansans (aluminum bottle caps) strung on a piece of wire. With the traditional chant of “Namamasko po!“, these carolers wait expectantly for the homeowners to reward them with coins. Afterward, the carolers thank the generous homeowners by singing “Thank you, thank you, ang babait ninyo (you are so kind), thank you!”