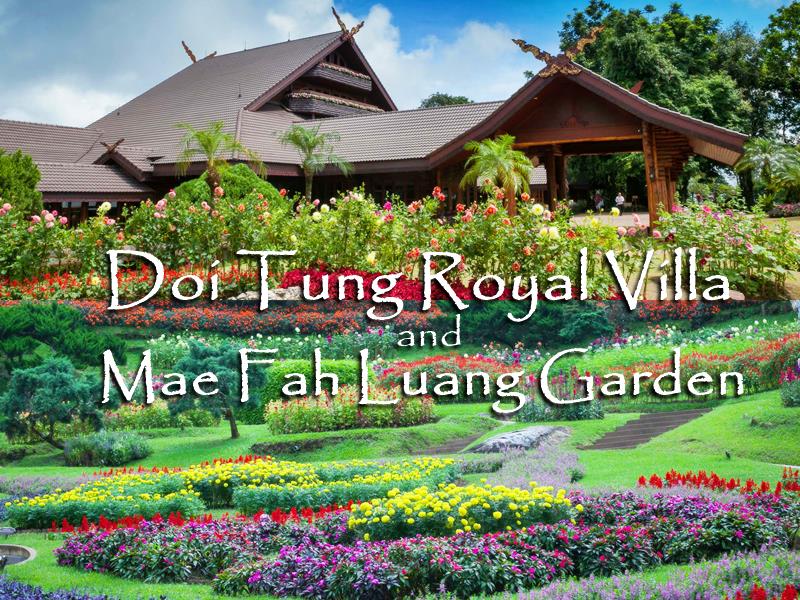 That was my first time in Chiang Rai. As a travel blogger, I always spread myself to any adventure and experiences that the station will offer.

Then, with much excitement, straight from the Chiang Rai Airport the TAT Newsroom Blogger Team was brought to our first destinations of the daylight, the Doi Tung Royal Villa and Mae Fah Luang Garden. These two are among the most celebrated tourist attractions of Chiang Rai.

It may not be  the highest elevation of the province, the 1,389 m high Doi Tung rises steeply, standing isolated close to the Thailand–Myanmar border. It is in the region known as “Golden Triangle“.

The Doi Tung  is an area of approximately 950,000 square kms   that overlaps the mountains of three states of Southeast Asia: Myanmar, Laos, and Thailand. The old heart of the world’s opium trade.

The place  has a hotel; restaurants where we enjoyed our lunch, a coffee shop which we breathed for a while and gift shops, and  also holds an open-air market with food and locally-produced handicrafts. 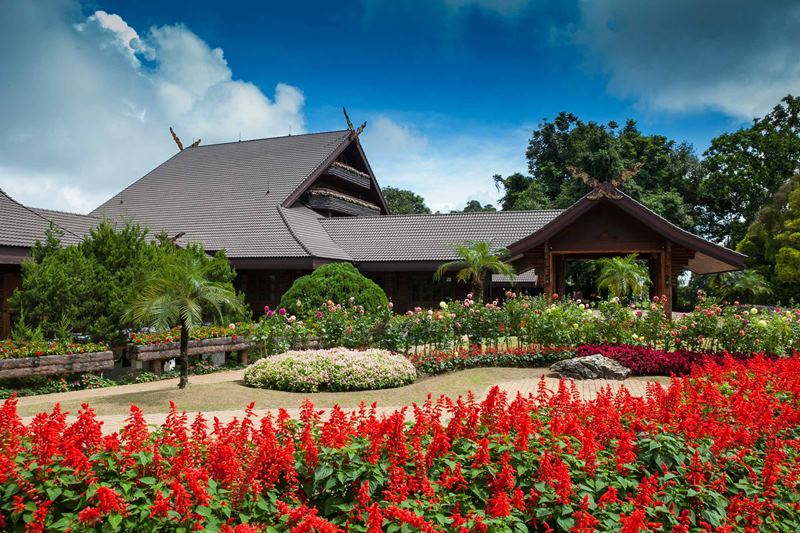 Upon arrival at the gate of the Doi Tung Royal Villa which is a few more meters from the building,  you will get  an attendant which will yield you  denim pants and tops  to use  if you are not putting on the right garb. Proper attire means modest clothing – no shorts, no body-hugging or  see-through clothing, etc.

While walking from the gate to the  Royal Villa you can immediately see beautiful  blooming flowers planted all over the place. 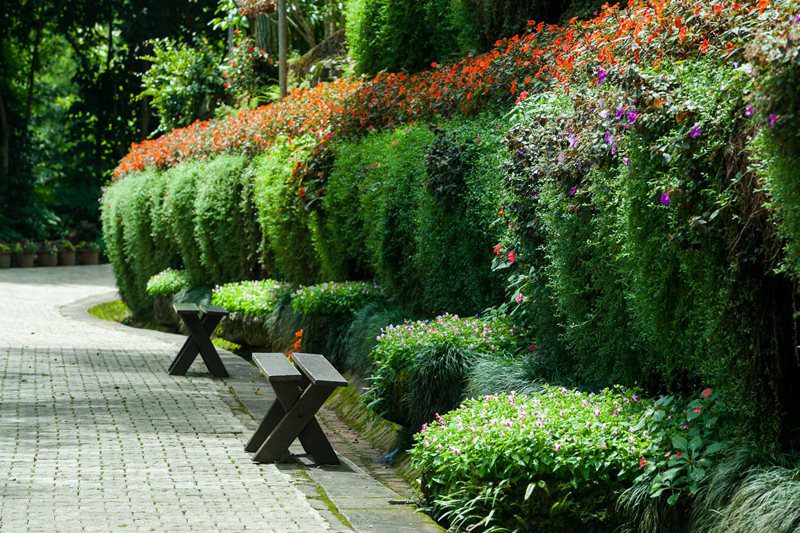 Built from the  Princess Mother’s private funds, the Royal Villa was originally built on the concept  that the local hill tribes would be honored by the royal presence and hoping that they will stop their opium cultivation.The Princess Mother  considered the Villa as  her first actual home in Thailand. It is said that she also remained  in the place because of her desire to reforest the country and help to better the lives of the local Thais.

The exterior of the Doi Tung Royal Villa was made of concrete and decorated with wood slabs, cut from discarded teak trees, which came from forest thinning work by the Forest Industry Organization. While the gold teak wood was  used for  the flooring of the interior of the Royal Villa. The simple interior design exudes elegance and functionality, which reflects  the nature of the possessor of the mansion. 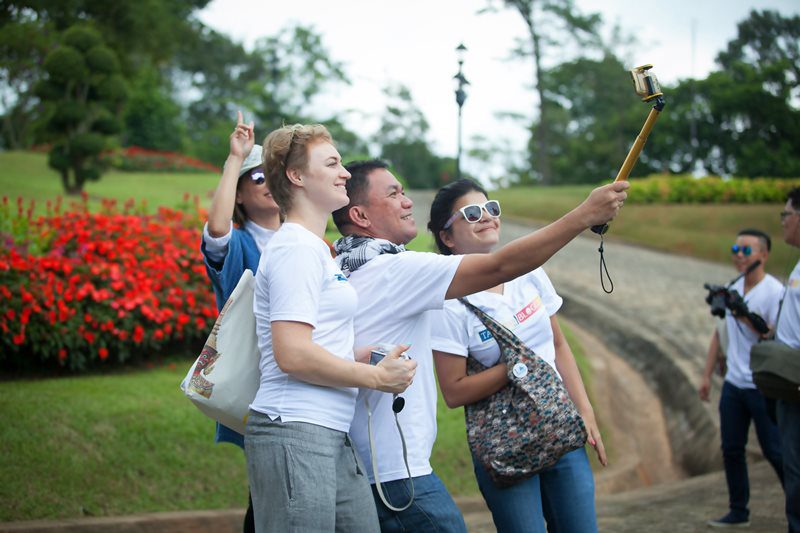 The environment of the villa is beautifully decorated with numerous variety of flowering plants  which draw the place visually pleasing. Of course, we never left the villa without having a group photo for the TAT Newsroom Bloggers. 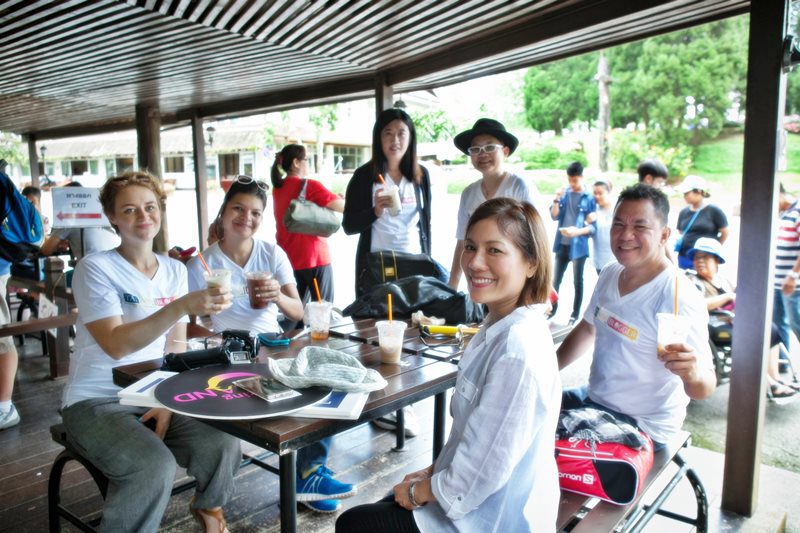 After  exploring the Doi Tung Royal Villa, we rested for a while and have some cold coffee before we continued discovering  the place.

Our next  target  was the Mae Fah Luan Garden which is  settled in front of the Doi Tung Royal Villa, along with an area of hillside that was originally the Akha village of Pa Kluay. 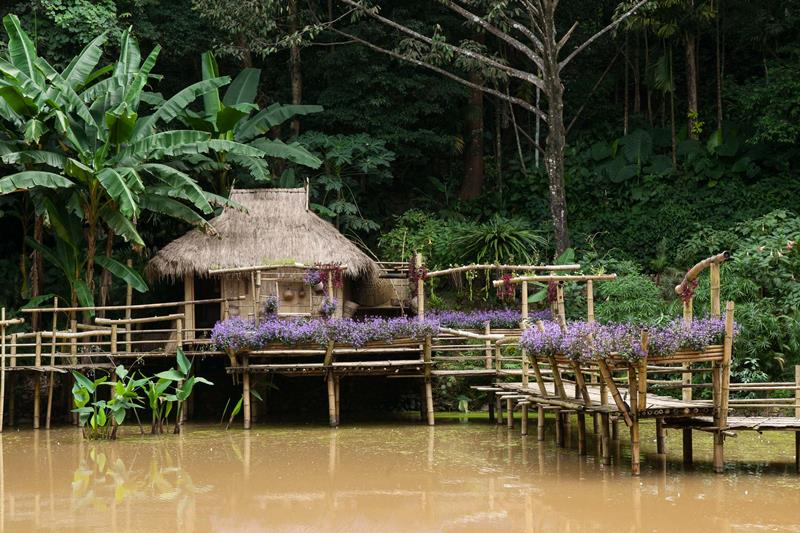 Upon seeing  the garden, I instantly reasoned that the Mae Fah Luang Garden is the most beautiful landscaped gardens in Thailand met with hundreds of dissimilar varieties of plants and blossoms; some sculptural and rock elements and water features. 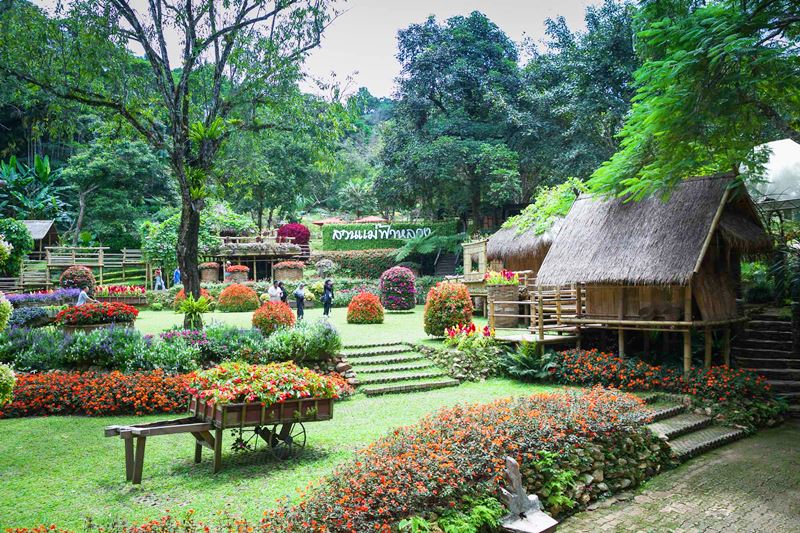 This village used to be an important route for opium caravans and those involved in heroin and firearm trafficking.

A garden of mostly  flowers growing in a gentle climate was established over 10 acres of land in accordance with the Princess Mother’s desire to give Thai people who have never traveled overseas an opportunity to see and enjoy  a temperate flower garden. One eye-catching sculpture stands in the center of the garden. It is supposed that the Princess Mother  name  the sculpture “Continuity”,  to draw attention to the fact that continuity ensures the success of whatever enterprise. 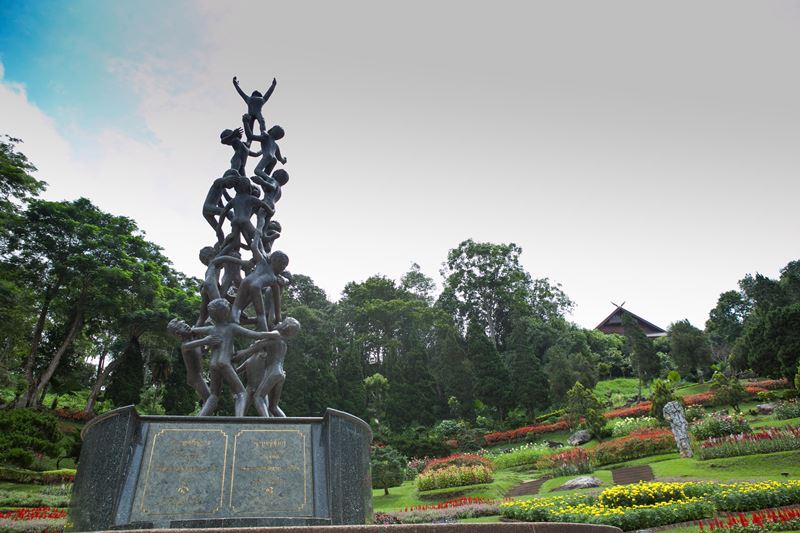 The colorful garden consists of several lawns with various types of annual and perennial flowering  plants of which some of them are quite familiar to me as they also grow in the Philippines. 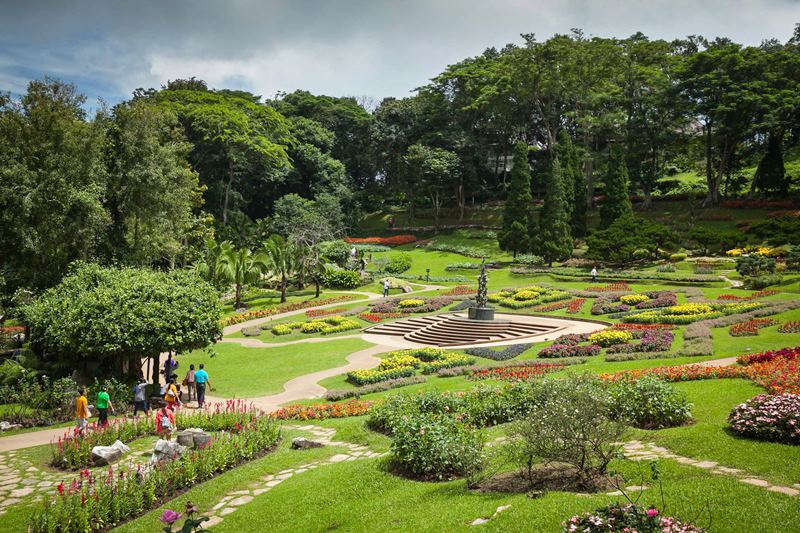 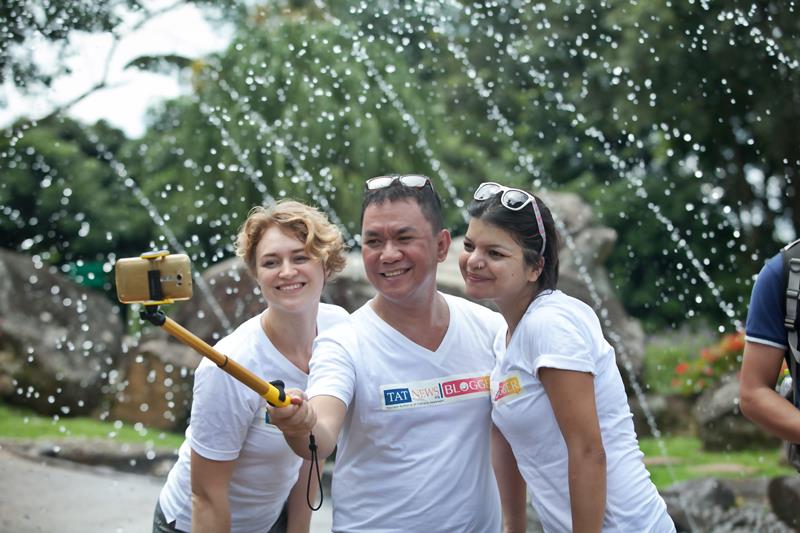 After exploring the Mae Fha Luan Garden we gathered to enjoyed a feast at Krua Tamnak. This restaurant is found within the complex and offers a food variety of Thai dishes. Please bookmark this page, as I will be releasing an article featuring some of my favorite Thai Food which I sampled during our trip. 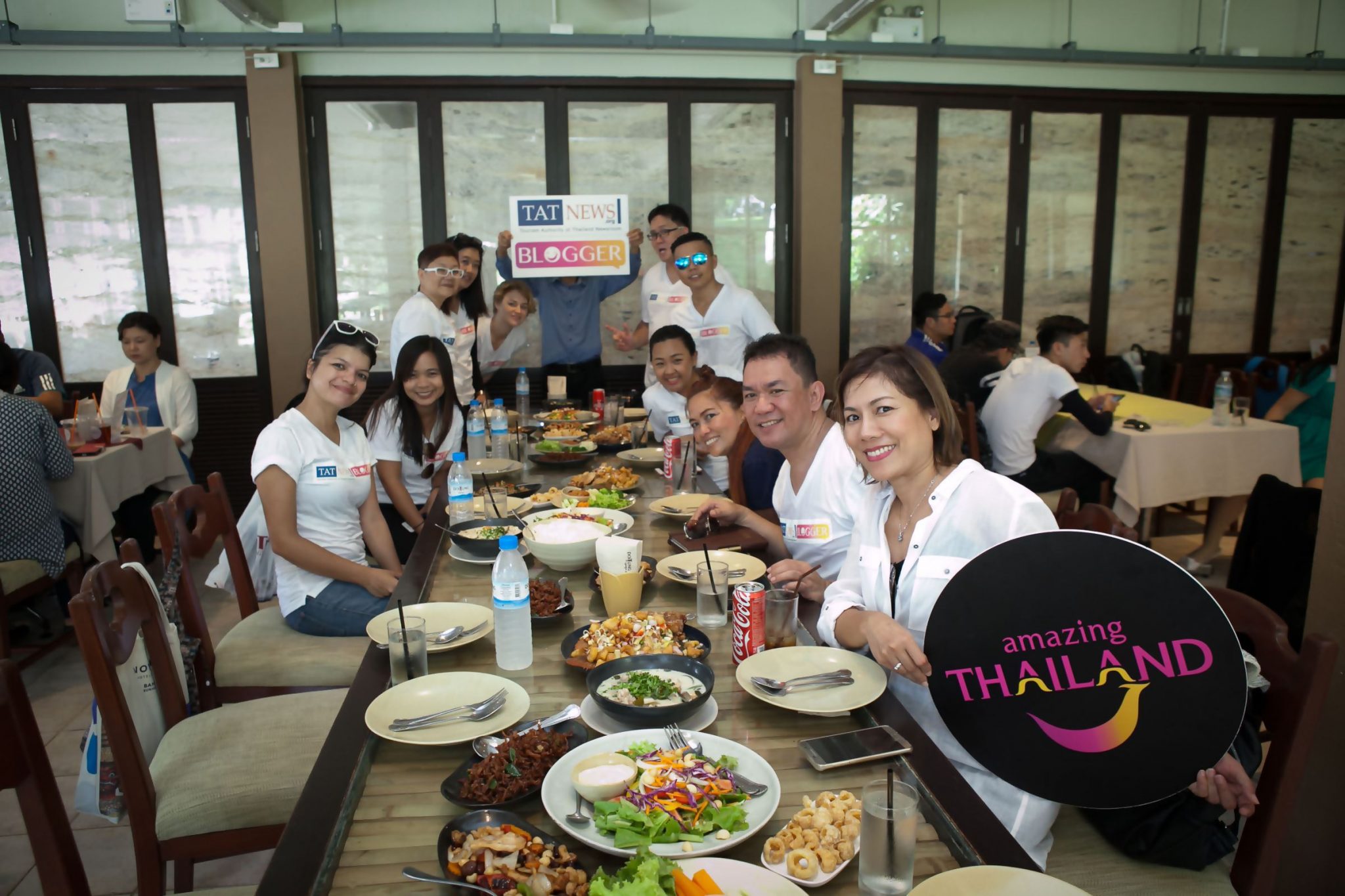 The TAT Newsroom Bloggers enjoying a feast at Krua Tamnak