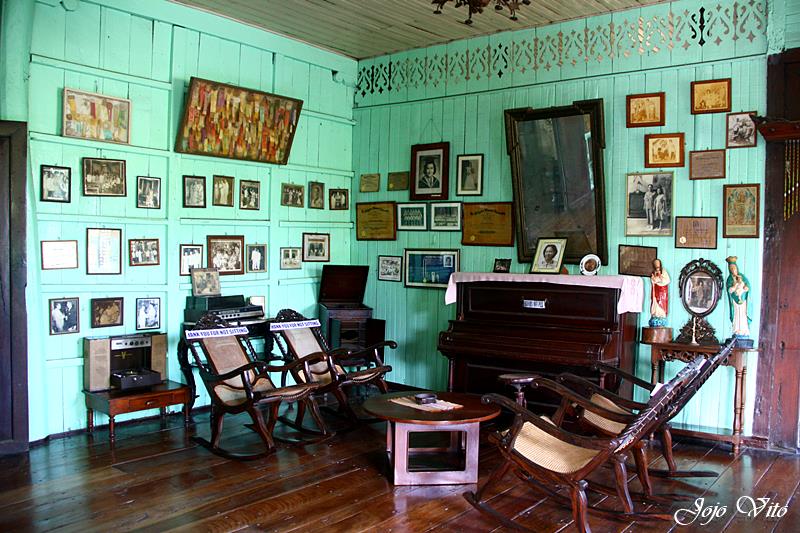 Vigan Tourist Spots: The main living room of the Crisologo Museum with some family photographs on the wall and some memorabilia

That was our second day in Vigan and we are scheduled to see 2 Vigan Tourist Spots , the popular museums in the place of, the Crisologo Museum and Syquia Mansion of President Elpidio Quirino.

The Crisologo Museum is a century old family house which is a  typical 2 storey “Bahay na Bato at Kahoy” (House made  of stone and wood).

For the sake of those who doesn’t know Floro S. Crisologo, he was  the patriarch of the clan and a congressman known for being responsible for landmark legislations that not only benefited his constituents but the whole country as well. He was the man behind  the laws which  created the  North’s first state university, the University of Northern Philippines, and the establishment of the Social Security System, which benefited the whole country today.

According to history, this nobleman was shot in the head by a still unidentified gunman  in October 1970, while he was inside the St. Paul’s Cathedral attending a mass. His wife Carmeling Crisologo, as well as  the entire family, made a pronouncement that time  that they will not take any action for revenge.  They decided to convert their mansion into a museum so that his name will not be forgotten.

Top: The main dining room of the mansion; Bottom: the entrance of the museum

The Crisologo Mansion is visited by various tourists both local and international. The entire house showcases antique furniture and furnishing owned by the family as well as various memorabilia and other prized possessions of the Crisologos .

Top: the author trying the antique calesa; Bottom: The old car where Crisologo’s wife survided in attempt on her life

At the ground level, one can see the   antique calesa that is still being used as film props and even as a wedding carriage.Also,the  old car where Floro Crisologo’s wife survived an attempt on her life while she was pregnant and serving as governor of the province is on display .

The first floor also houses the library and study room , where visitors can view the book collection and numerous news clippings about this political family, especially about the death of Floro Crisologo. Visitors to the museum can also see  the main  exhibit in the house that shows the bloodied clothing of the late congressman.

The Crisologo museum is managed and maintained by the Crisologo family even up to this writing.

Interesting findings at the  kitchen of the mansion. These kitchen wares and tools showcased how the food are being  prepared  and stored during the Spanish period

After our visit at Crisolog Museum, we proceed to see our last destination for that day, the Syquia Mansion of President Elpidio Quirino. 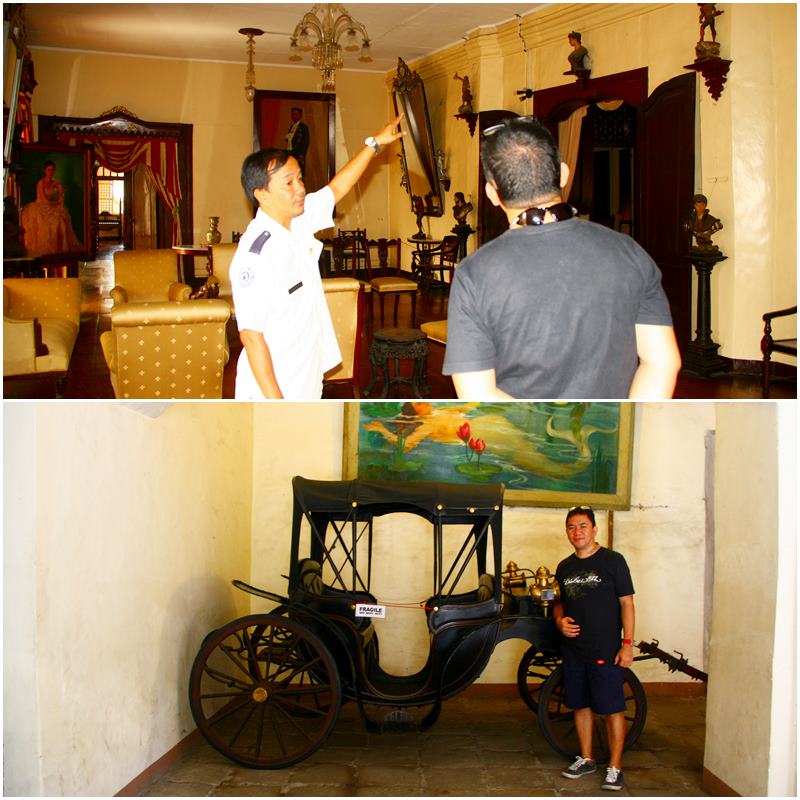 (Vigan Tourist Spots ) Top: The In-house guide explaining to me various features and pieces found inside the mansion. Below: The author pose for photo in an antique calesa  at the entrance near the staircase leading to the second floor of the house

The Syquia Mansion which houses President Quirino’s vast  memorabilia is actually owned by his wife, Dona Alicia Quirino. Alicia Quirino’s  ancestor was a Chinese who made his fortune due to the active trading business in Vigan. The first lady’s grand ancestral home was even used for  some of the President’s functions  including some cabinet meetings during his administration. 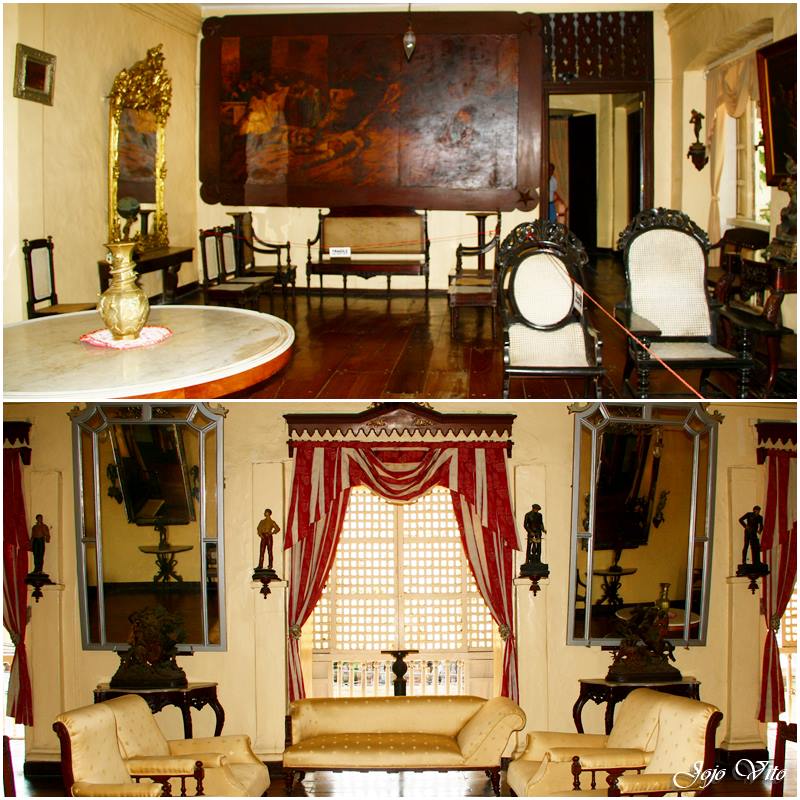 Top: The Syquia Mansions Ante-sala with the replica of Juan Luna’s Spolarium, painted by the later’s assistant. Below: The main living room decorated with antiques acquired around the world.

The two-storey, blue and cream-painted mansion is found  at the corner of the Quirino Boulevard. Upon arrival at the place, we were greeted by the in-house guide who explained to us various features of the mansion as well as it’s history. 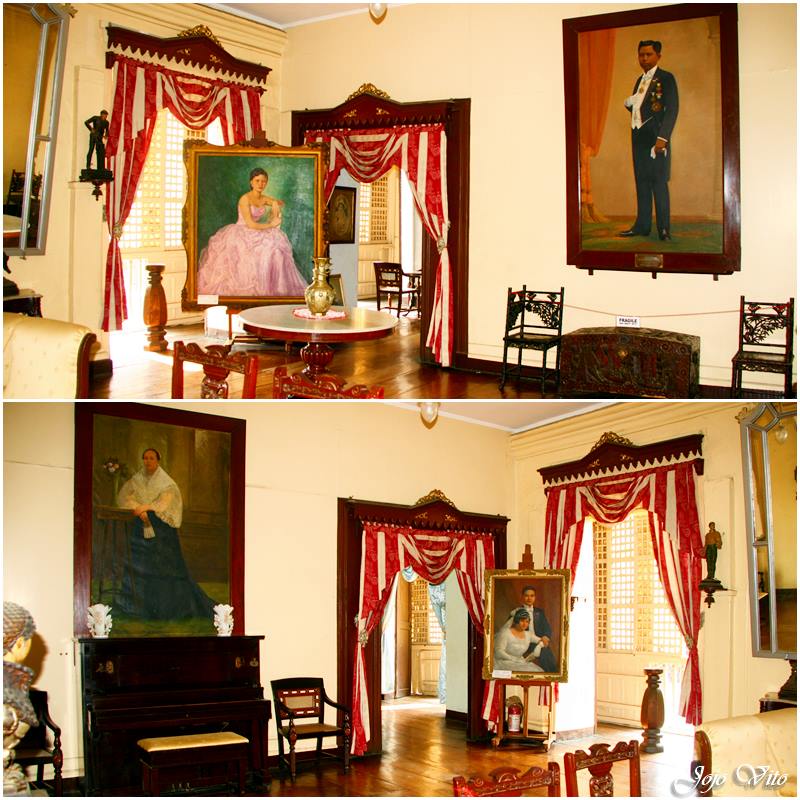 The Syquia Manion’s grand living room with all the antique collections which were sourced and acquired from various countries around the world. Life size oil portraits of the family were displayed around the area  with three identified as being done by national artist Fernando Amorsolo.

The moment you go up the mansion, you will immediately enter the ante-sala (anteroom) which were used to entertained visitors.According to the guide, during the olden times, not so important visitors were just entertained at the ante-sala. While those who belonged to upper class are ushered to the main living room.

At the ante-sala,  you will see the replica of  Juan Luna’s Spolarium, which was painted by the national hero and painter’s assistant. So many interesting house features were explained to us by the guide  including the  peeping holes found in the master’s bedroom and on the floor which was used to view visitors if the owners would want to see them  or should they be allowed   to enter the grand living room. 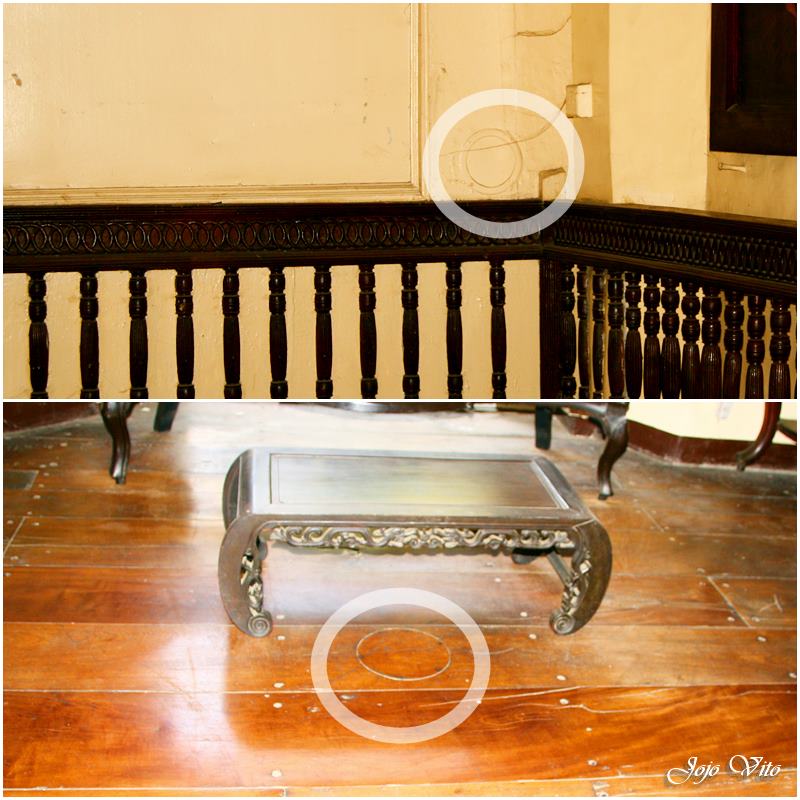 Top:The peeping hole at the wall where the owner of the house can see their guest. Bottom: the hole in the floor where the servants would see in advance their guests.

At the grand living room , I noticed an alley on the side and  partly hidden – this alley was used by the second class servants during those time which was called,”aliping sa gigilid”.

My heart bleeds , knowing the story of these servants. “Aliping Sagigilid” are not allowed to serve the guests nor to enter the main living room. According to the guide, most of these servants were not even paid, they were just given some shelter and food to eat. Another type of servants exists during those times were the “Aliping Namamahay” . These type of servants were the only one allowed to serve the guests and can enter the main living room. 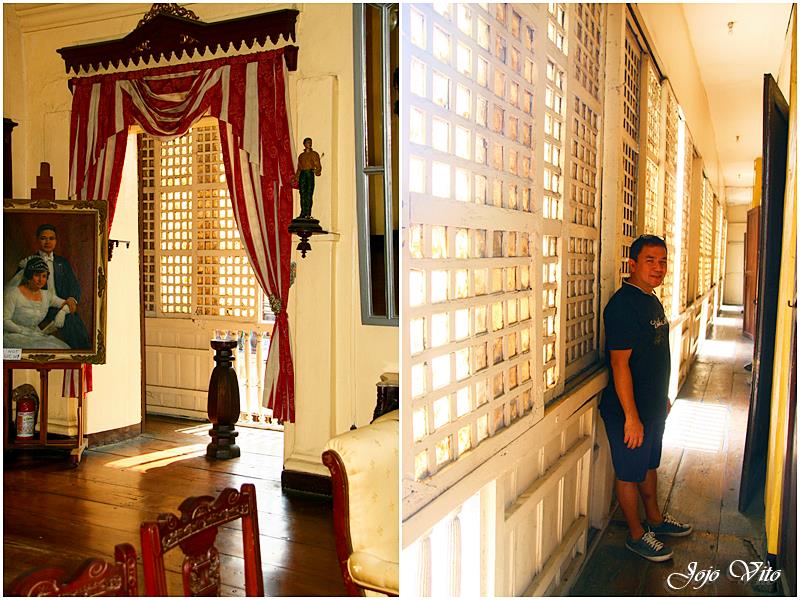 Left: The door leading to the alley used by the servants (Aliping Sagigilid). Right: the author standing at the passage for “Aliping Sa Gigilid”

Inside the Syquia Mansion, I was awed by the huge rooms filled with not only Philippine antiques but also those from other countries around  the world. 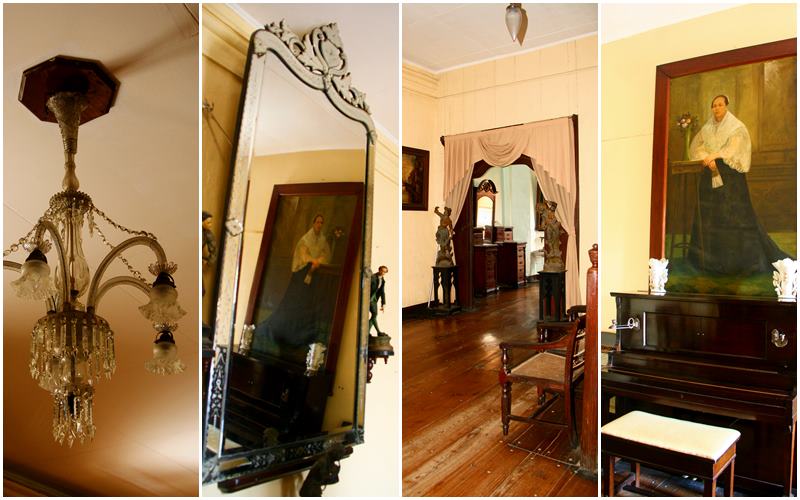 One notable feature of the old houses in the Philippines, including the Crisologo and Syquia Mansions, is the absence of restroom inside the bedrooms. Despite the grand and ornate furniture found inside the bedrooms , I had never seen any restrooms from these houses. According to the guide, during the olden times, even big houses or mansions has only one comfort room, most often these restrooms are even constructed separately  from the main house. 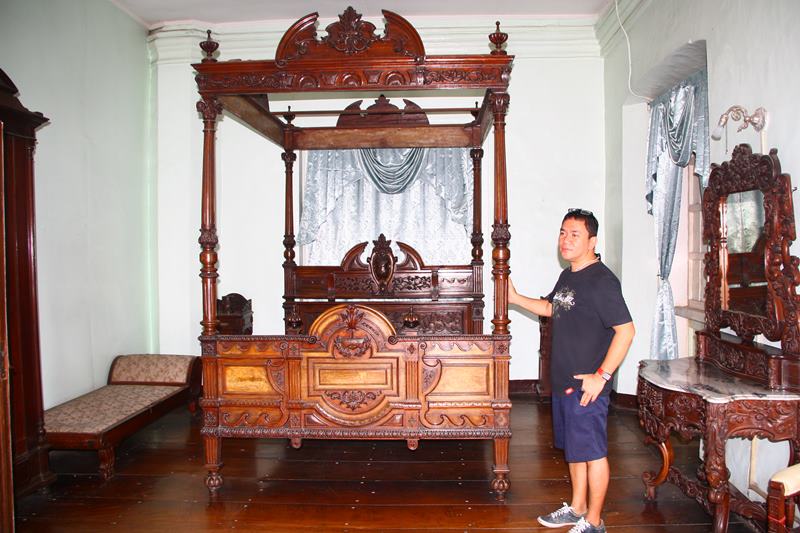 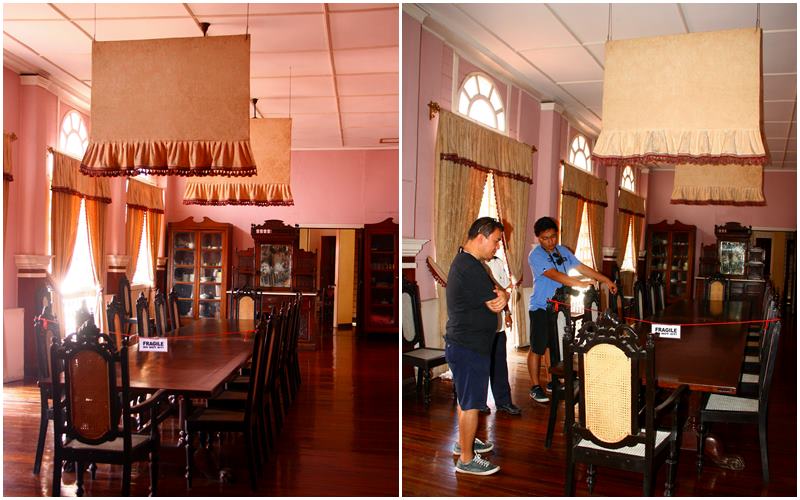 The Dining Hall of Syquia Mansion. It is said that some cabinet meetings were held in this place during the time of President Quirino

The in-house guide  of the Syquia family is always around when the mansion is open to accompany visitors.  The Syquia Mansion tour is free, but a donation is recommended to be given to the in-house guide of the museum.

Read the rest of our trip by clicking the links below: