The official logo of the 39th MassKara Festival celebrating the 80th birthday of Bacolod has been released.

Councilor Em Ang, MassKara Festival Action Officer presented for the first time to the public the logo and the theme at the Rotary Club of Bacolod North meeting.

Digital artist Mark Lester Jarmin who also did last year’s MassKara Logo designed the logo for 2018. Jarmin is a digital artist specializes in character logos to the international clientele.

The Masskara Theme, “Happy Birthday, Bacolod!” has bigger fonts than the Festival name, MassKara Festival. This is to give emphasis to Bacolod City’s milestone which is bigger than the festival the 80th birthday of the city.

Interestingly, the festival logo shows a MassKara dancer peeking through the first letter “O” in the word “Bacolod.”

The dancer is wearing a mask with eight (8) colorful feathers depicting the eight (8) decades of the city; silhouettes of a human figure representing the people of Bacolod behind the masks, a black and white checkered pattern representing one of Bacolod’s landmarks—the public plaza’s checkered steps; and a smiling face on the second letter “O.”

For those who have been waiting for the festival the following are the highlights to watch for:

The festival will start on October 8 and will culminate on the 28th. But as of this writing, preliminary activities such as screening of the Masskara Queen is already being done.

Private organizations are also very busy with their preparations and that includes the opening of the newest hotel in Bacolod City, the Stonehills Suite. The Stonehill Suites will have a 3-night party at their Skydeck with top calibers DJs as follows:  Ace Ramos, Butta B, Hannah Ichiko, Lolo Villa, Joms Delfin, JR Lee, Ken Madalag, Kiko Ramos, Marga on the Mic, Melvin B, Nix Damn P, Rammy Bitong, RJ Yusay, Japanese Dj

More on activities will be revealed soon, so stay tuned as we update you with more about 2018 Masskara Festival.

More things to do when visiting Masskara Festival 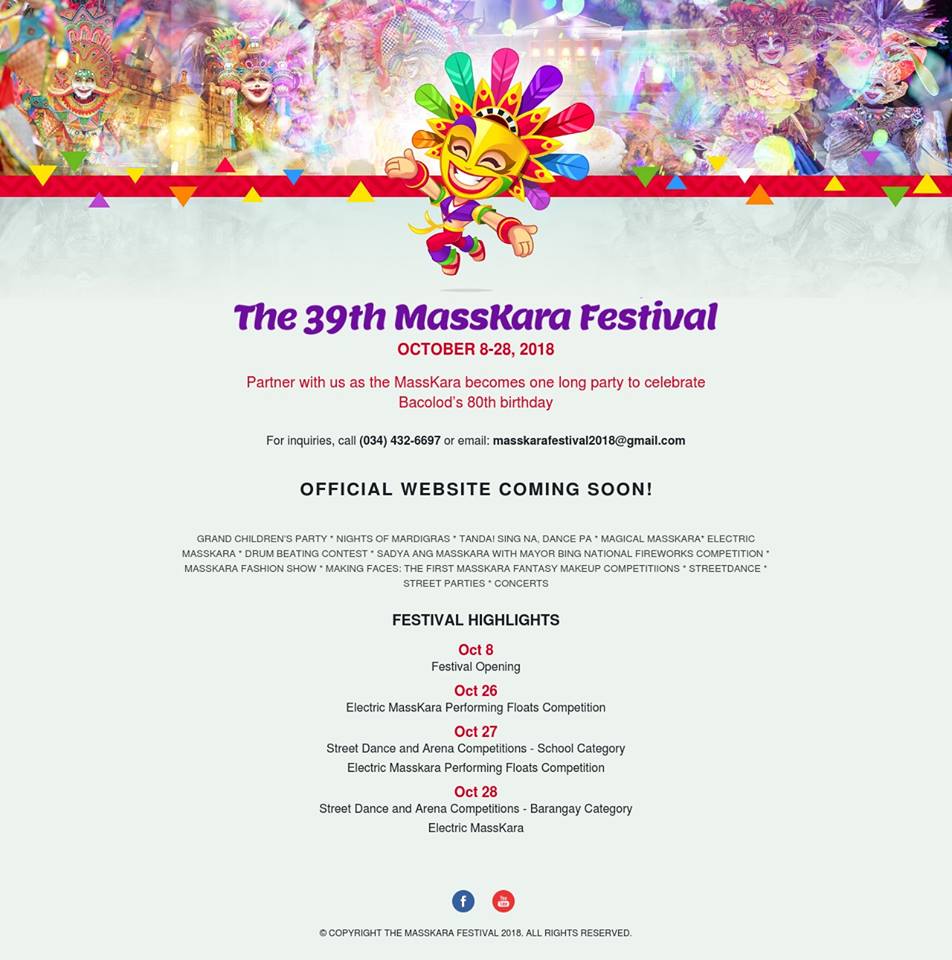