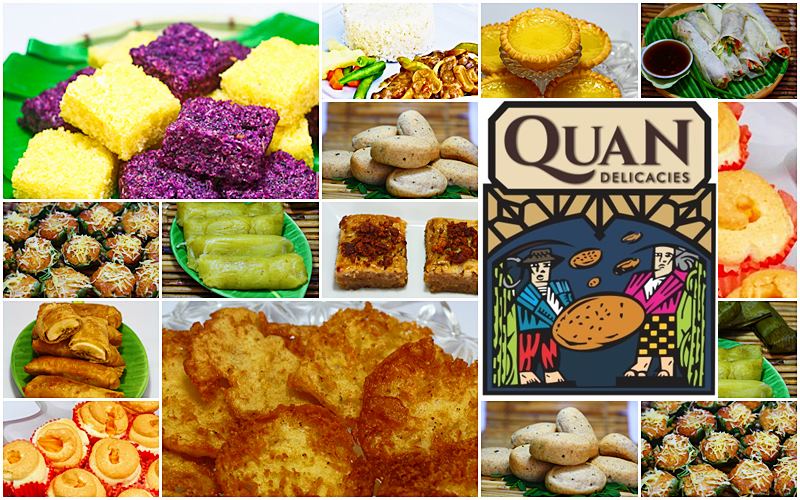 QUAN NATIVE DELICACIES: A FAMILY OF FOOD FOR THE FAMILY

“A family of food for the family”, goes the tagline of  QUAN NATIVE DELICACIES. Run by the mother and daughter team of Agnes Cuenca and Chole Cuenca-Chua, Quan has been in business for more than 21 years now.

Quan Delicacies is very famous in Bacolod City, especially for their native delicacies. Starting with a single product, their soft and tasty rice puto, the owners were encouraged to develop more “kakanin” or native delicacies which are not only familiar with the taste buds of the buying public but also became a favorite amongst the locals. They did not only produce high-quality native delicacies, Quan had evolved into a multi-food company producing food products ranging from kakanin, bread, cakes, pastries and even fast food products, and recently their new brand, “Sud-an” which is a ready-to-go dish. 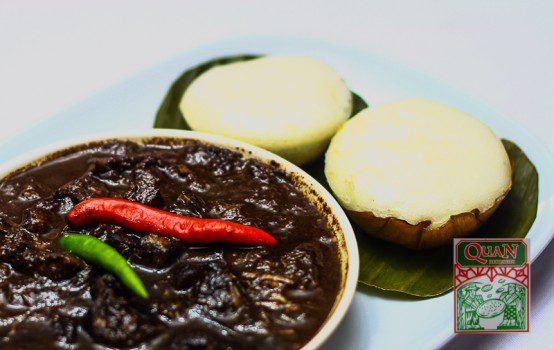 Puto is a steamed rice muffin made from  rice flour. It is traditionally in plain white color  with banana leaves lining.  Quan also came out with  colored  variants. Dinuguan is a perfect pair for Dinuguan .

Among their best selling native delicacies is the cassava cake/pudding which is made mainly of grated cassava, milk, egg, etc. Because of the popularity of the cassava cake, Agnes Cuenca who is the genius behind all the recipes of the store variant of the product using Pandan as an added flavor. Similar to this native dessert Quan also has an Ube Pudding, which has, of course, the ube being the main ingredient.

Because cassava is abundant in Negros, Quan Native Delicacies produced various kakanin out of this root crop being the main ingredient. These products include pitsi-pitsi, alupi, yam-yam and of course the very famous Puto tak-tak or lanson which has 2 versions: butter and ube.

If you are familiar with the “puto-pao”, a combination of puto and siopao, it was Agnes Cuenca who originated this recipe. During the time when flour was very expensive, Ms. Cuenca thought of producing a siopao version of the puto. Today, puto-pao is being copied all over the place.

Another mainstay at any Quan outlet is the Sapin-Sapin. This is a Filipino multi-layered glutinous rice and coconut dessert. Sapin-Sapin is made primarily from rice flour, coconut milk, sugar, water,  sprinkled with coconut flakes on top.

The Biko among the Tagalogs is known as suman among the Negrenses or Ilonggos. Quan has several variants of suman. They have the regular suman in brown color which uses the brown sugar , hence the color brown in the food. They also have the ube  and the suman tagalog which uses white sugar.

Biko or Suman among the Negrenses and Ilonggos

When it comes to native delicacies, of course, the malagkit rice is a very common ingredient. Quan’s native delicacies which has  malagkit being the main component include the palitaw which is made of ground sticky rice and rolled in grated coconut with sesame seeds and muscovado sugar; the ibos which are wrapped in coconut leaves and best eaten with ripe mango; the suman latik, an amazing dessert served with coco jam, puto tikoy and much more.

Other popular delicacies which can be found at Quan stores include puto cuchinta, bibingka, Maja Blanca and a lot more. 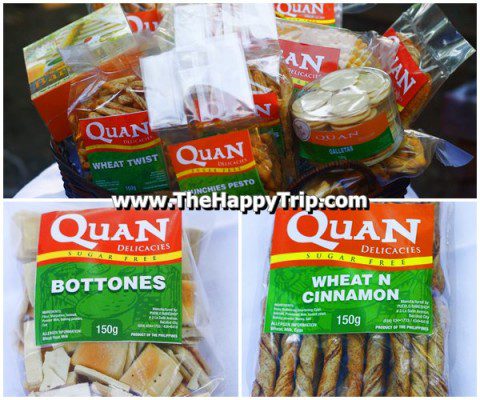 BREAD AND OTHER BAKED PRODUCTS

Quan also has a wide array of bread and biscuits. Of course, they have the Piaya, a muscovado-filled unleavened flatbread. For the calorie conscious, they have a long list of bread and No-Sugar-Added Biscuits. 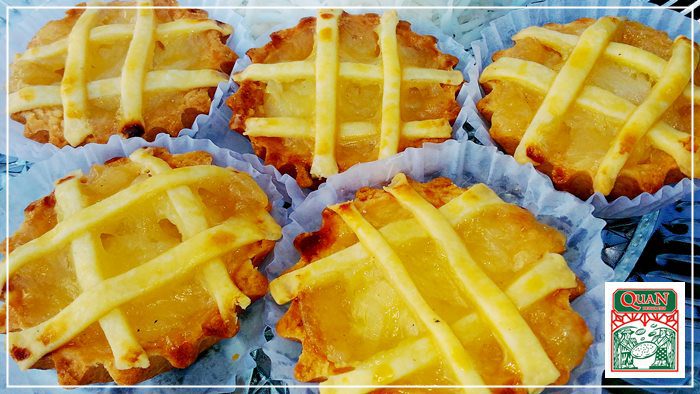 Heard of Napoleones? You should try Quan’s napoleons, a flaky croissant-like pastry with delightful custard filling and light sugar icing. Quan’s other pleasurable sweet offering include their tarts, butterscotch, brownies and a lot more.

Cakes? Oh, Quan has a delectable variety of cakes which are nice for gift giving. They are priced well too.

If you love the Puto, then you should eat it with Quan’s Dinuguan. Quan’s version of flavorful  Dinuguan is a flavorful  stew of pork and chicken meat simmered in a rich, spicy dark gravy of pig blood, garlic, chili  and vinegar.

Other Fast Food Items which are in demand on Quan’s menu include Arroz Caldo, Batchoy, Pancit Malabon and a lot more.

Siopao? Oh, you should try Quan’s Pork or Chicken Siopao. Quan never used any extender for their filling and trust me  , their Siopao is one of the best siopaos in town. 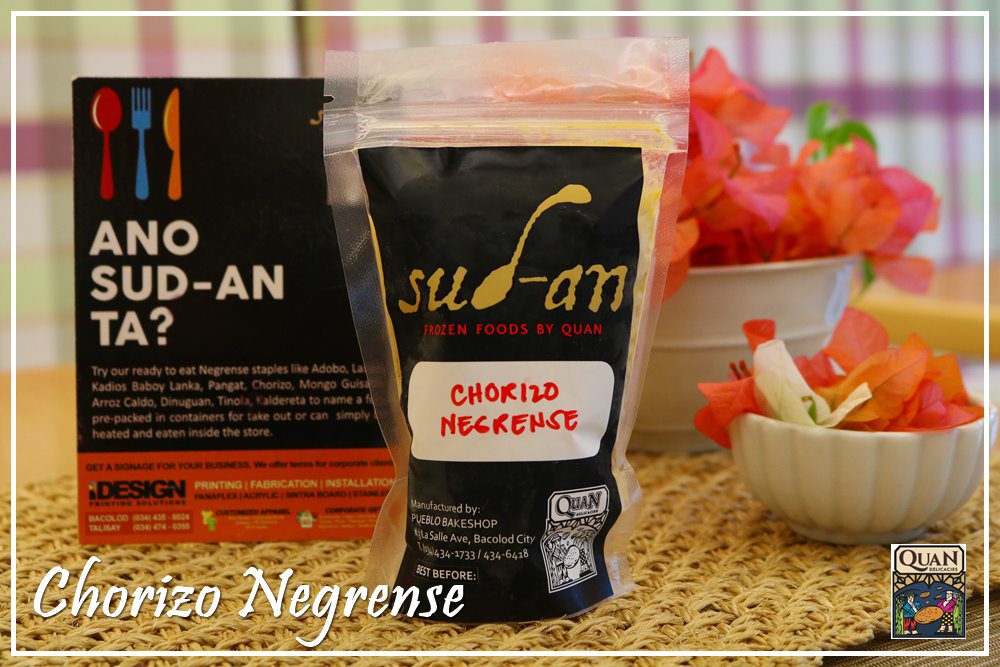 Recently, the company launched its ready-to-go meals neatly packed in a plastic container. These dishes sold under the “Sud-an” brand are so popular especially for those who don’t have the time to cook their food. Sud-an is a vernacular term for viand.

Oh, wait…if you are attending a party or a meeting, simply order the party Bilao at Quan. You can choose the products that you like to be placed in the native bilao. You can have an all Native Delicacies or a combination of kakanin and other baked products.  Prices vary according to the contents and size of the Bilao. 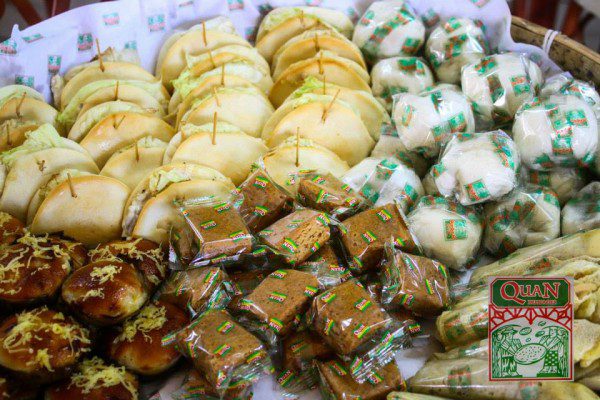 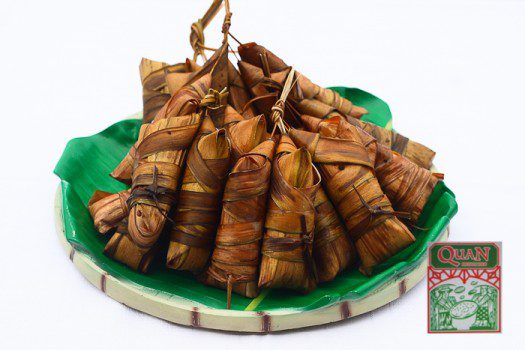 Suman or Biko (in Luzon)  is a Filipino rice cake made from glutinous rice, coconut milk, and brown sugar.  Quan has other variants for suman, like ube suman, suman pandan (green color and with pandan flavor)and suman tagalog.

Kutsinta  is usually served with freshly grated coconut. Quan’   Kutsinta has colored variant which are nicely packed and are nice gift item. 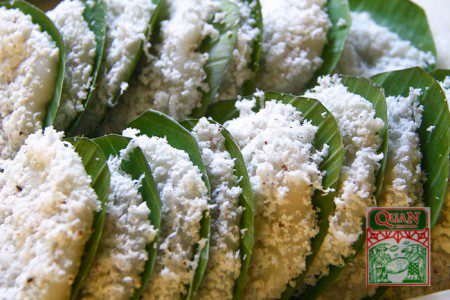 Palitaw is the common name, but in Negros this is also called Inday-inday.  Made from ground glutinous rice and sugar and got its name from the manner it is cooked.

Filipino Puto Tikoy. Quite different from the Chinese Tikoy

Bibingka. It is a round rice cake made with galapong, sugar and coconut milk. Quan’s bibingka is cooked differently from the other  usual bibingka because it is steamed before it goes inside the oven. Quan’s Bibingka is filled with  itlog na maalat and topped with cheeze.

Suman Latik is made of  glutinous rice cooked with coconut milk and wrapped in banana leaf. Latik  is a coco jam that is topped to the suman when served.

Yam-yam. This yam-yam is one of the latest creation of Quan added to its wide array of native delicacies. Made from casava and mixed with other secret ingredients giving this dessert a different texture. 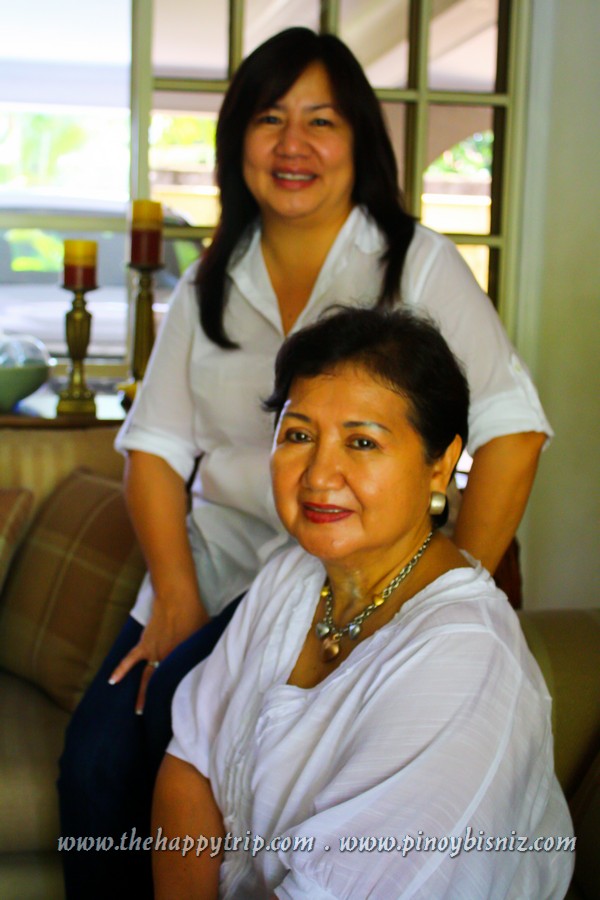 LOOKING FOR A HOTEL? ENTER BELOW: