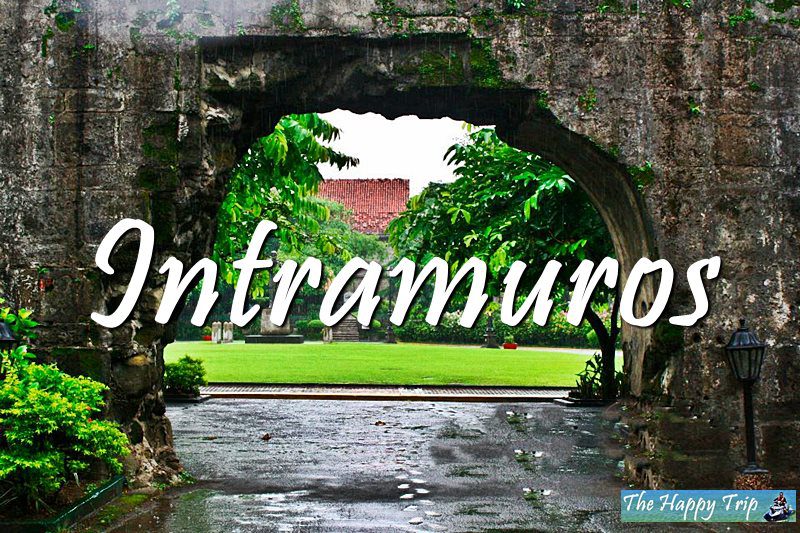 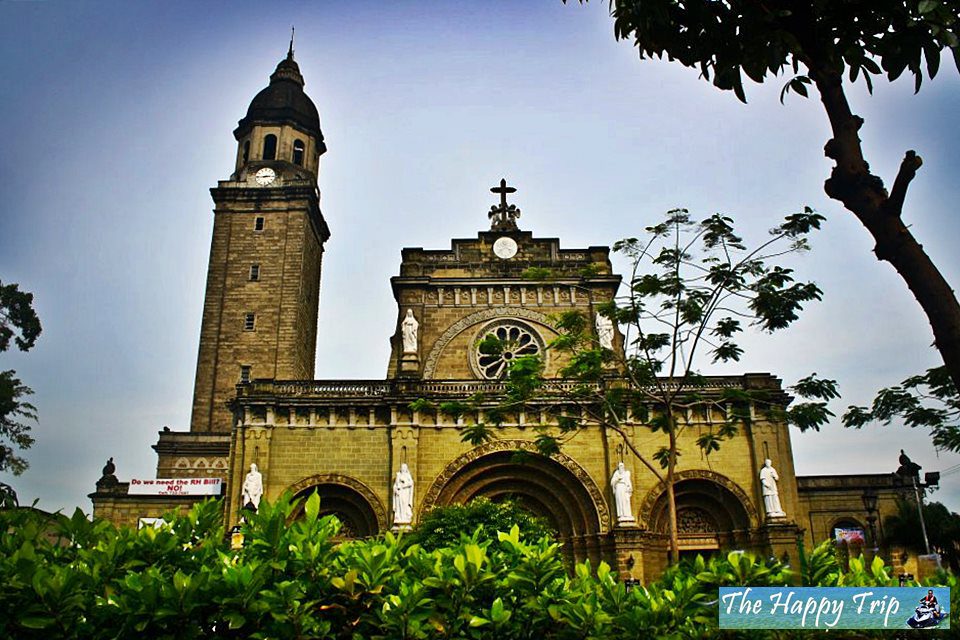 From its very foundation in 1571 to the cessation of Spanish rule in the country, the “walled city” known as Intramuros is a historical landmark that is rich in history. Literally meaning “within the walls” based on the Spanish language, the place was once the seat of power of the Spanish crown in its most distant colony, the Philippines.

Initially built by the Spanish conquistador Miguel Lopez de Legaspi, this enclave which was formerly known as Maynilad was also the center of the colonizer’s economy, religion, and education in the country.

Fast forward into the present, the heavily fortified community which was set to be the cradle of the Spanish influence in the country has become but a relic of its former self.

Intramuros, Manila at the Present

Ravaged by the war which brought most of its parts in ruins, the walled city that is Intramuros is mostly the only recreation of what it had been, particularly its walls. Most of the infrastructures it previously held were also made unrecoverable brought by the consequence of the Second World War.

Although part of the Filipino culture is interweaved from that of its colonizers, the ostensive influence of the Spanish has seen decline throughout the years. Despite this, the formerly secluded city of Intramuros remains a clear example of the Spaniard’s influence over the land, albeit only as a vestige of it.

Fort Santiago, once a headquarter of the Spanish military, is now just a park which people visit to take a gander. It is in this construction where the idol of St. James the Moor-slayer, patron saint of Spain, is housed. Another historical significance of this citadel is in the fact that it also served as imprisonment to the country’s national, Jose P. Rizal, prior to his execution. 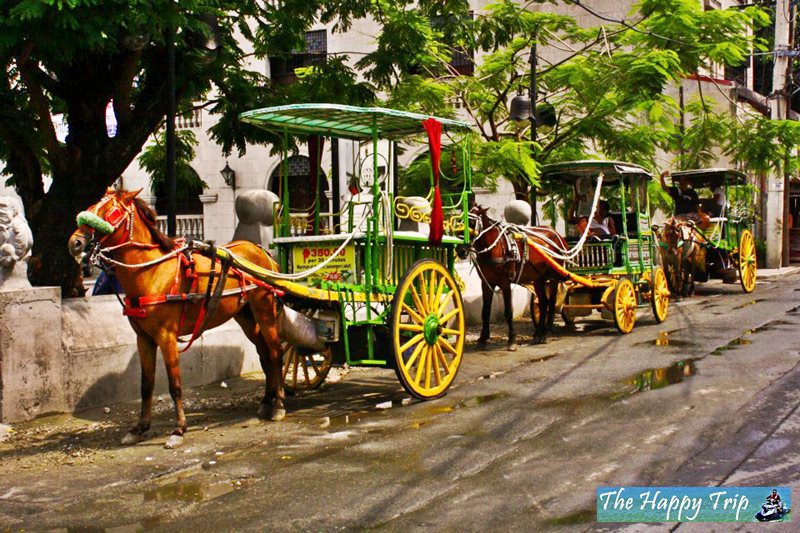 As once the center of education by the Spanish colonizers, this former city was home to some of the country’s oldest universities and colleges, most of which destroyed during the war. Of the three universities originally erected in the place, only one remained standing to this day: the Colegio de San Juan de Letran. The rest, while still in operation, were moved to other locations.

Colleges, however, like the Pamantasan ng Lungsod ng Maynila, Lyceum University of the Philippines, and Mapua Institute of Technology were only built in the area during post-World War 2 era. 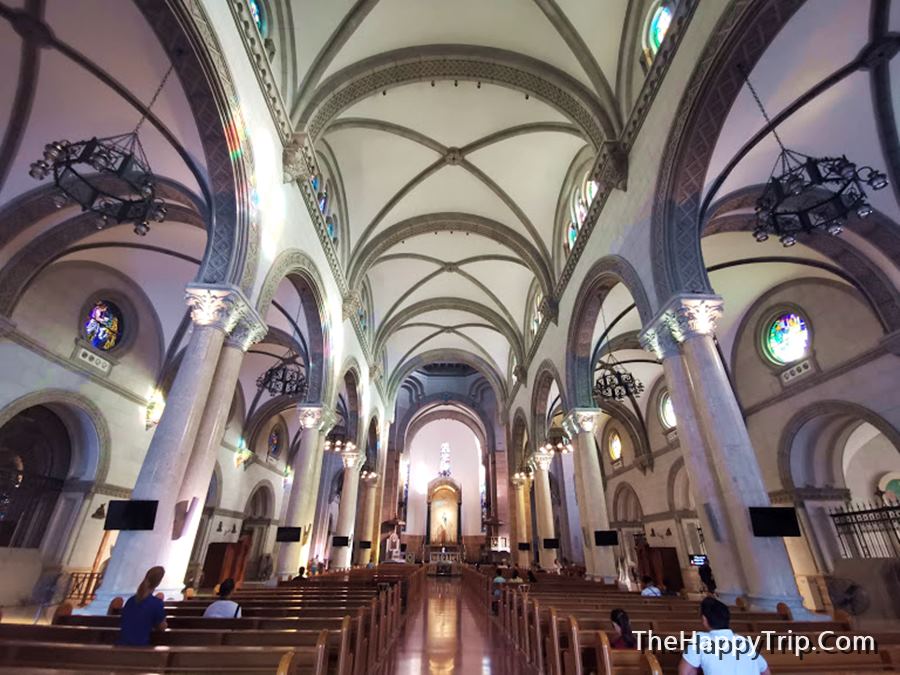 As the seat of religion during the time of occupation, the walled city of Intramuros is nestled with multiple grand citadels as built by a number of religious orders. Of the seven massive churches that once stood in the heavily-guarded city, only one remained standing resulting from the damages of war: San Agustin Church.

Apart from being the oldest structure in what is now present-day Manila, the San Agustin Church is the only construction that was spared from the catastrophic event that brought much of the city in utter ruins.

Like the universities that were damaged and never been restored from their original standings, the 6 churches that were not saved from the destruction were never resurrected to see the light of day at Intramuros ever again. Rather, they were also moved elsewhere outside the confines of the walled city. 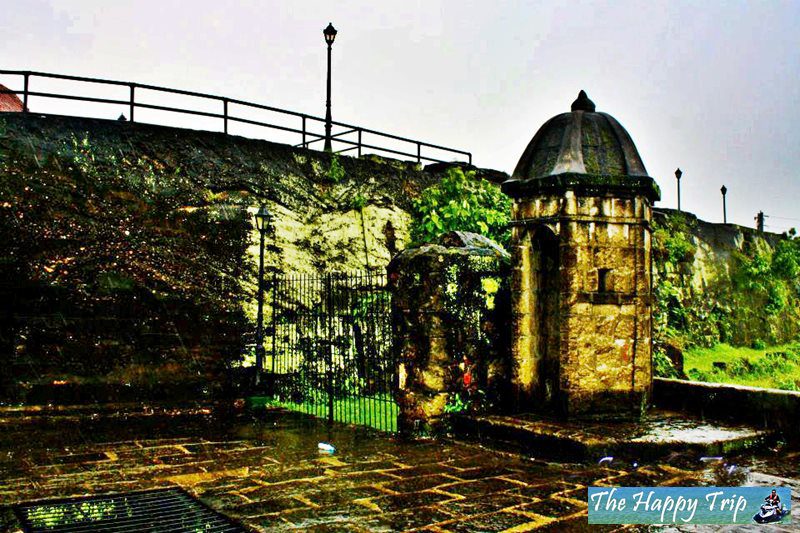 Things to do in Intramuros, Manila | Tourist Attractions For Your Self-Guided Tour

Fort Santiago or more commonly known as Intramuros was built in Manila way back 1571 located in the native settlement of Raja Soliman. Its first fences construction was made up of logs and earth which was eventually destroyed in 1574 during the Limahong attack. It was then reconstructed using stone materials in the year 1589 and 1592. Unfortunately, it was damaged by an earthquake in the year 1645, and it needed to undergo another reconstruction in the year 1658 to 1663. Since then, it has been a haven for the US Army, the Japanese military, and a long list of historical events. In fact, it also served as a prison and a place of torture for hundreds of both civilians and guerrillas. Finally, in the year 1992, it was declared under the protection and restoration of the Intramuros Administration in the year 1992.

With the place’s dark past, who would have taught that it will become a famous landmark as well as a top tourist destination in the city center of the country, Manila? If you did not yet visit the place before, we have here the list which you may want to check on for your next tour:

Previously used as the abode of the Governor-General during the Spanish occupation, this place now serves as a memory of the massacred 80 male civilians during World War II. This substantial structure building now houses different government offices.

Established in the year 1783, this pathway serves as a short-distanced path going to the palace of the Governor-General as well as the Archbishop. This is famous for the reason that the national hero, Dr. Jose P. Rizal, passed through this gate on his way to the execution site.

As one of the original entrance gates of Intramuros built in the year 1603, this place provided easy access for those who are going to the Malecon Drive. It was once destroyed way back in the battle in Manila in the year 1945 and was reconstructed in the following years adding side chambers and a gate.

Established in 1895, this was built as a Casa Nueva or a Provincial House of the Augustinian Order. It is a two-story building which was used as a place for the Adamson University in the year 1939. However, it was also used as a barracks for the armies during the Japanese occupation in 1980.

This site served as the headquarters of General Douglas Mac Arthur in the year 1941. It is a tunnel-shaped passage that was originally constructed in the form of drainage.

A pentagonal structure that was built outside the walls of Intramuros. This place served as a storage of the cannons during the Japanese occupation.

Formerly used as a convent for nuns, this is now transformed into a museum built in honor of the National hero, Dr. Jose P. Rizal.

Considered as the oldest stone in Intramuros, this was built by a Jesuit Priest in the year 1586 up to 1587. T has undergone series f renovations for the past centuries due to bombing during the British occupation and earthquake in the year 1863.

Served as an aquarium, prison cell, and barracks, this place has been through a lot. It was returned to a Manila Aquarium later on but was also foreclosed in the year 1983.

Built as a protection of the Puerta Real, this place also served as storage of gunpowder. It was restored in 1987.

This area was also built to protect the other parts of the Intramuros. It was then converted into a garden in the year 1940 and was damaged during the 1945 Manila battle.

Facing the city, this place was also built as a part of the massive protection. It was damaged in the year 1762 due to the British invasion and 194 during the Manila battle. This was restored in the year 1984.

This is one of the earliest gates of Intramuros and became the official gate being used by the Governor-General in the year 1764.

It was used as a defense to protect the walls of Baluarte De San Andres and the Parian gate and as storage of military supplies. It was damaged in the year 1045 and was reconstructed in 1982.

Considered as the essential wall of Intramuros, this wall protects the side of the river. A hospital was built in 1587 and was destroyed in 1597 due to a fire. It had renovations in the 18th century and was later on once again destroyed by the Manila battle in 1945. The final reconstruction took place in 1989.

This is the last gate to be built in the walled city. This was named after the statue of Queen Isabel II located in the place which was later on transferred. The place was used as a medical quarter for the soldiers as well as a storehouse.

Also known as the customs house, it became the house of different offices including the Central Bank of the Philippines.

Originally allotted to be a memorial of the Dominican order, this was bought by the government and given to the University of Sto. Tomas where they put the statue of the UST founder and was replaced by a replica in 2002.

This place serves as the headquarters of the US army, site of sessions of the First Philippine Assembly, the office of Bureau of Justice, and House of Bureau and Treasury.

A plaza that serves as a monument place for the statue of Carlos IV of Spain and later on of the GOMBURZA.

The first construction kicked in in the year 1571 and had undergone a series of reconstructions due to fire, earthquake, typhoons, and different circumstances. It was fully finished in the year 1958 and was officially named as the Basilica of the Immaculate Conception.

A museum showcasing the past influence of the Chinese in the city center of the country.

It was taken from the part of the Santa Isabel College and serves as a memorial for the non-combatant victims of the wars.

Known as the oldest church in the country, it was built in 1571. This serves a major role in the different invasions, and it was finally declared as a UNESCO World Heritage Site in the year 194.

The name of the place was taken after the original barrio or barangay name of the walled city. It has nine Philippine-Hispanic design homes, gift shops, restaurants, and a lot more. It also has the Casa Manila museum which shows the lifestyle of the 20th century. 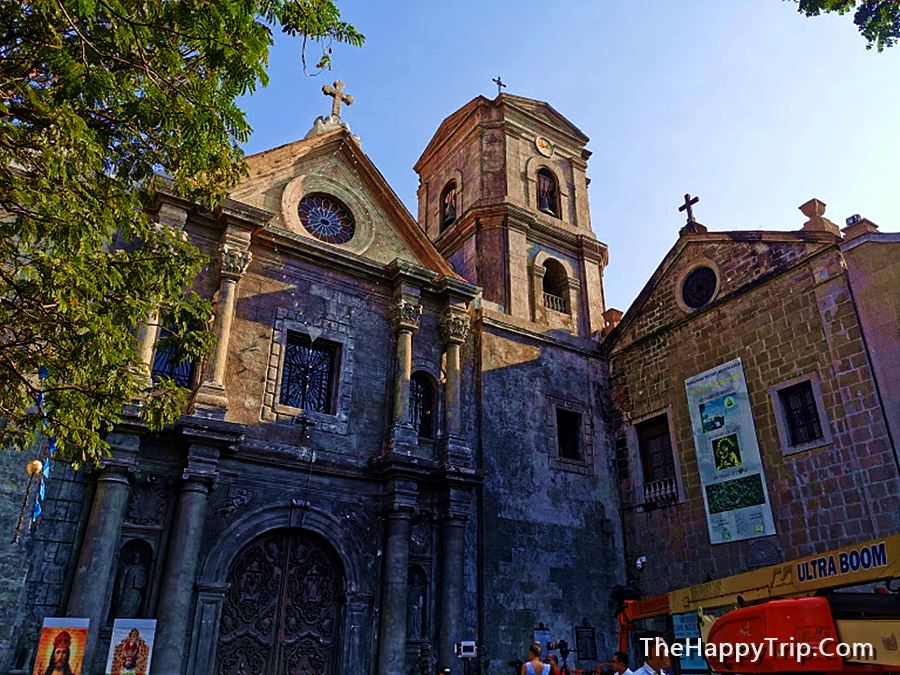 All in all, the walled city covers a large vast of land and it is inevitable that the historical marks brought by it become a tourist spot in the country. Despite the bloodshed and all the wars and battle, the walled city is standing strong as of to this moment waiting to be visited and discovered by more tourists for the years to come. 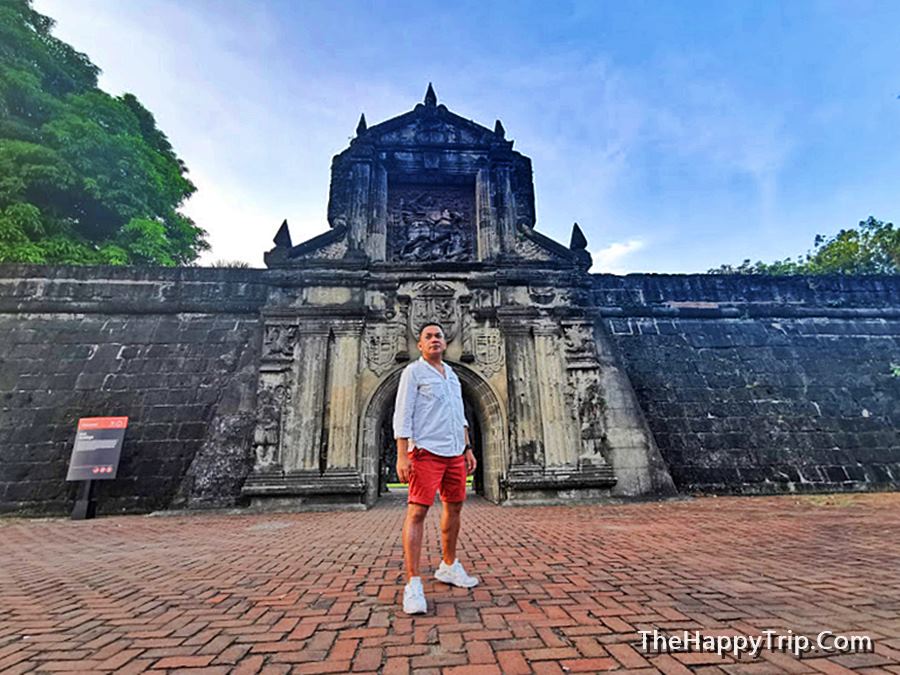 Where to Stay in Metro Manila | Hotels Near Intramuros, Manila

Click our link below to compare Metro  Manila Hotels prices and book a room for this trip. 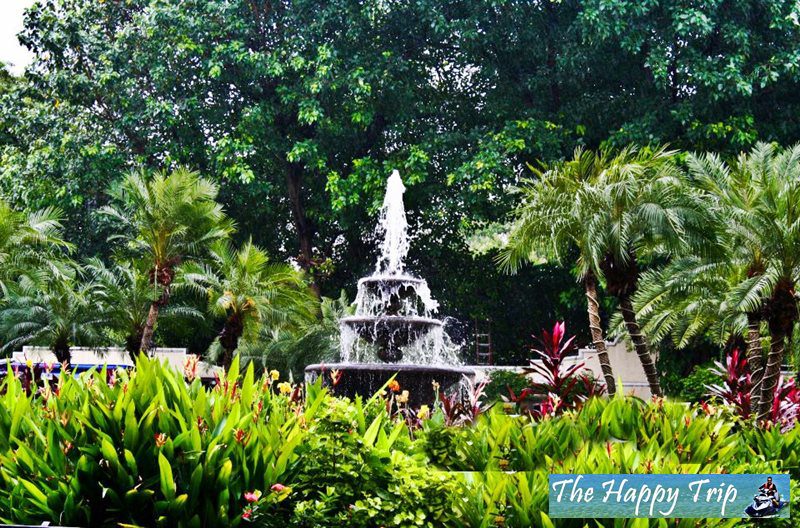