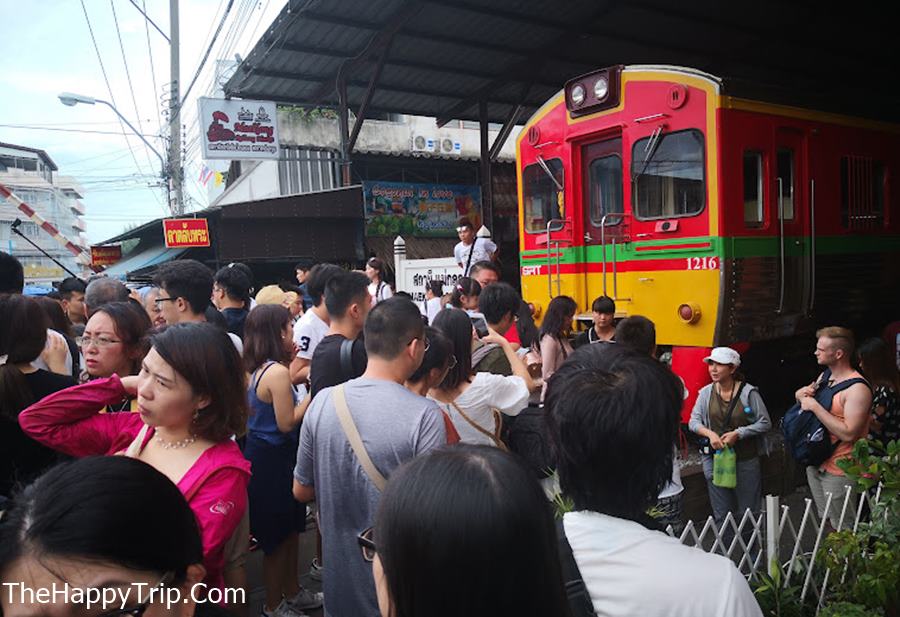 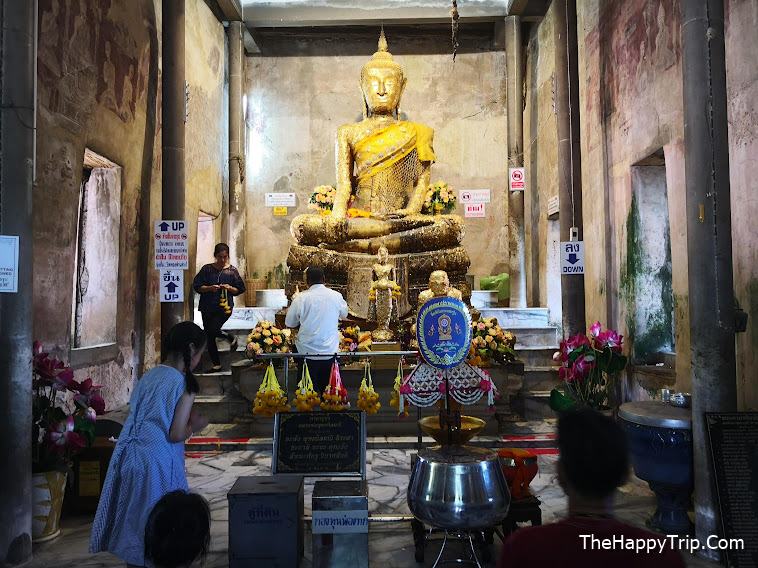 As a kingdom landlocked between kingdoms on all sides, Thailand’s history was carved during both times of war and peace. Despite having similarities in religion with its neighbors, Thailand was a kingdom that is at the constant struggle in keeping its sovereignty from potential invaders, the kingdom of Burma being amongst them.

Just situated on its west as bordered by a line which separates one kingdom from the other, Burma was a perpetual threat to old Thailand. Nowhere in the history of Thailand perhaps this notion is more valid than during the transition between the period of Ayutthaya to Thon Buri.

At a time when the perils of the Burmese forces have materialized, one province became pivotal in Ayuthaya’s defense against the formed invasion—the province of Mae Klong or Suan Nok and what is today’s Samut Songkhram. 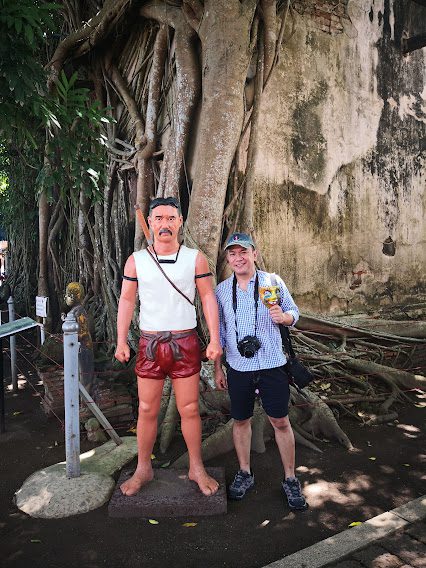 Knowing the impending menace of the Burmese army, then head of the kingdom Taksin the Great established a fort in Mae Klong which thwarted its neighboring kingdom’s attempt at overtaking the province and its adjacent regions.

Although the history of both Ayuthaya and ancient Burma had been thousands of years ongoing, the event that culminated at Mae Klong was a milestone against the hazard of Burmese occupation.

Subsequently, Mae Klong went for a name change as it was called Samut Songkhram which according to the Sanskrit language meant “war ocean.”

Apart from being a province that made a successful defense against foreign invasion, Samut Songkhrat is also significant in Thai history as the birthplace of Queen Amarinda and her descendant, King Rama II, the latter of which being now a memorial park within the Amphawa District. 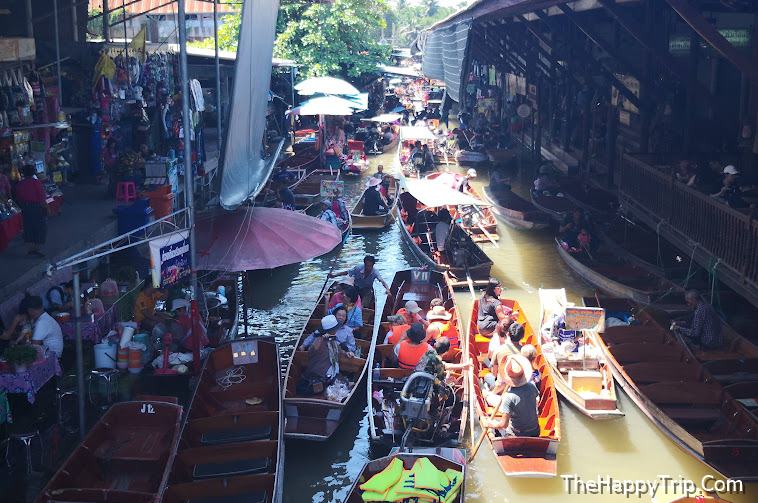 Nowadays, Samut Songkhram is mostly known as among the central provinces of Thailand, otherwise considered a part of the Bangkok Metropolitan Area. Geographically, the province and its corresponding capital city which bears the same name is nestled at the mouth of the Mae Klong River whose branching flows provided the province substantial water supply as irrigation.

As a host to many lakes that contain salt water, the coastal areas of these lakes produce tons of salt which thus makes the province a lead producer of salt in all of Thailand. As of 2011 records, as many as 111 households worked producing the salts which covered a land area of around 4,535 rai.

Another noteworthy aspect of the province is its rich distribution of shells which typically dot the sandbars of Don Hoi Lot. 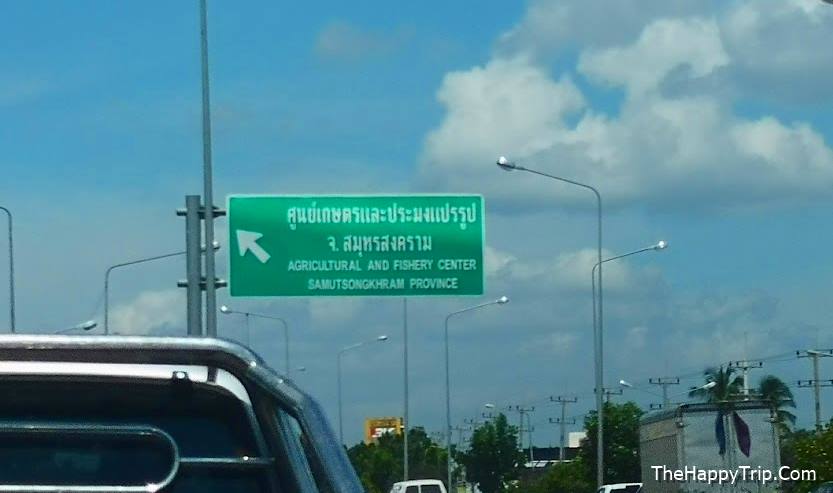 Symbols and Their Meaning

The provincial seal of Samut Songkhram showcases a drum over a river. Looking back at the old name of the province, the drum is made significant for the fact that “drum” in the Thai language is called “klong” which is a word found in “Mae Klong.” Another noteworthy feature of the provincial seal are the coconut trees which is one of the region’s primary products.

Yet, while not necessarily wholly represented in the seal, the province’s slogan highlights all of its significant elements in a single line, “City of Hoi Lot, Top Lychee, King Rama II Memorial Park, the Mae Klong River, and Luangpho Ban Laem.” 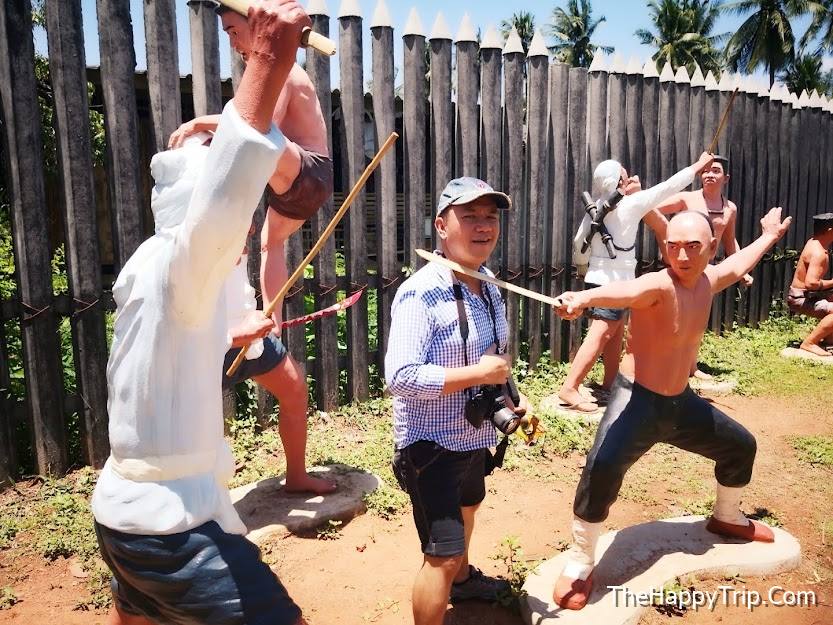 Immense in the historical past of this old navy camp which can be traced back to its origin during the ancient Kingdom of Ayutthaya. It also commemorates the heroism of the Thai army as shown in the built life-size statues.

The site also served as a witnessed to the sufferings of the locals during the Burmese invasion. This place served as their haven when they fled from the attack. Here, they restored a Buddhist temple and exerted effort to make it into a great one. Nowadays, this is one of the well-known temples in the country. It has some old or ancient Buddha images.

What makes this place famous is the ordination hall or also locally known as Ubosot. With its intricate design depicting the ancient epic of Ramayana, and the images of Buddha placed here, it is no wonder that people come here to worship and see the place. 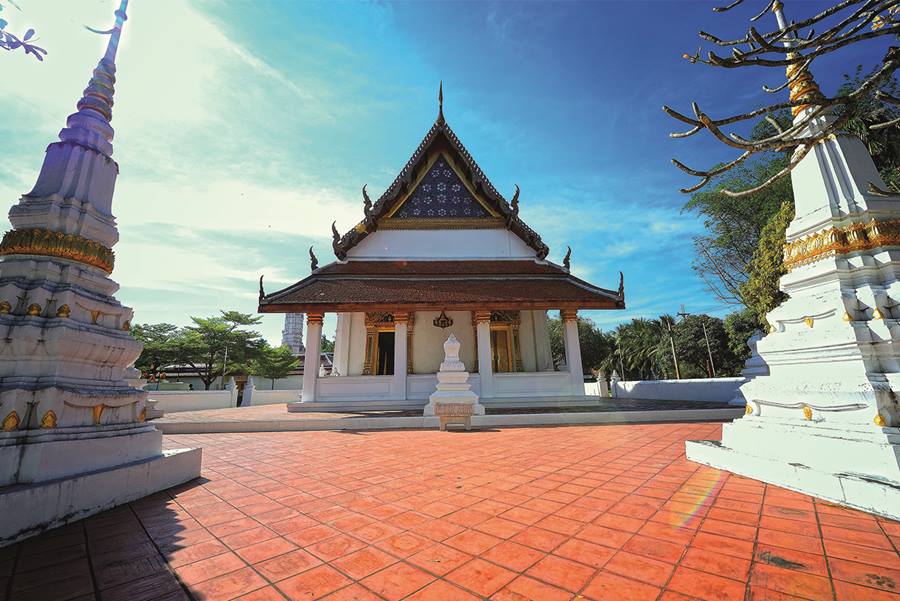 Assumed to have been established in the era of King Rama I, this 2nd class monastery of the royals is famous not only for its royal attachment but because of its displays of antiques which can be traced back during the Rattanakosin era.

This temple is something that might want to visit if you’re going to get to know Buddha better. It has mural paintings showing the life story of Buddha along with other beautiful architectural designs.

This temple built way back in 1868 is famous for the magnificent wood carvings which also shows the adventures, enlightenment, and preaching a life of Buddha.

This temple has a fantastic ordination hall that is about 150 years old. Thus, the architecture of this temple is also something that you should take note of.

This temple is in between two emerging canals and was built way back in the era King Prasatthong. Though seem to be many ordinary pilgrims would go here to worship.

This hilltop temple provides you the fantastic view and a chance to be with nature as you reflect quietly. There are also Chinese artworks on display in the same temple.

This place is a fulfillment of a promise made by a wealthy man when monks predicted that the daughter of the man would be queen in time. When it came true, this temple was built for them.

Aside from the place of worship for the Buddhist, this place also holds a great collection of ancient crafts. So, it is a temple and a museum in one.

Nativity of Our Lady Cathedral

The combination of French and Gothic architecture of this Christian Cathedral makes it so perfect for those who would like to spend some time reflecting. The carvings show some essential events from the bible. 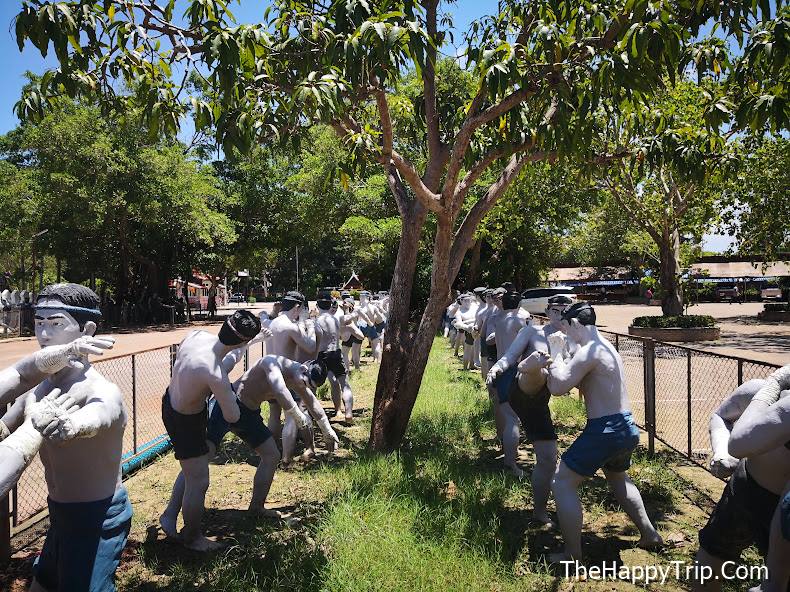 Built during the old years of the Ayutthaya Kingdom, it houses the image of Buddha called as the Lungpho Bot Noi which shows that Buddha was preaching his teachings in front of a crowd.

Aside from the worship rituals that you could do in front of the image of Buddha, another activity that you may do as a form of relaxation is to feed the fishes on the pond.

This memorial was built to commemorate the Chang-Eng twin brothers who became famous way back in 1811 due to their condition of being attached to each other’s chest.

It is as if going back to the era of King Rama II since all the displays here portrays the people, architecture, culture, and tradition during his period. Come here and see a part of the Thai’s history.

Your sweet tooth will be glad about visiting this place. All sort of dessert in the entire country are compiled here to preserve recipes and letting people know how excellent their cuisine is, especially for dessert.

Jars, pots, and all sorts of crafts made up of clays are here, and of course, these crafts are ancient. This is why the museum was built, to preserve and make sure that people could go back to the olden times and appreciate the beauty of the ancient culture and tradition. 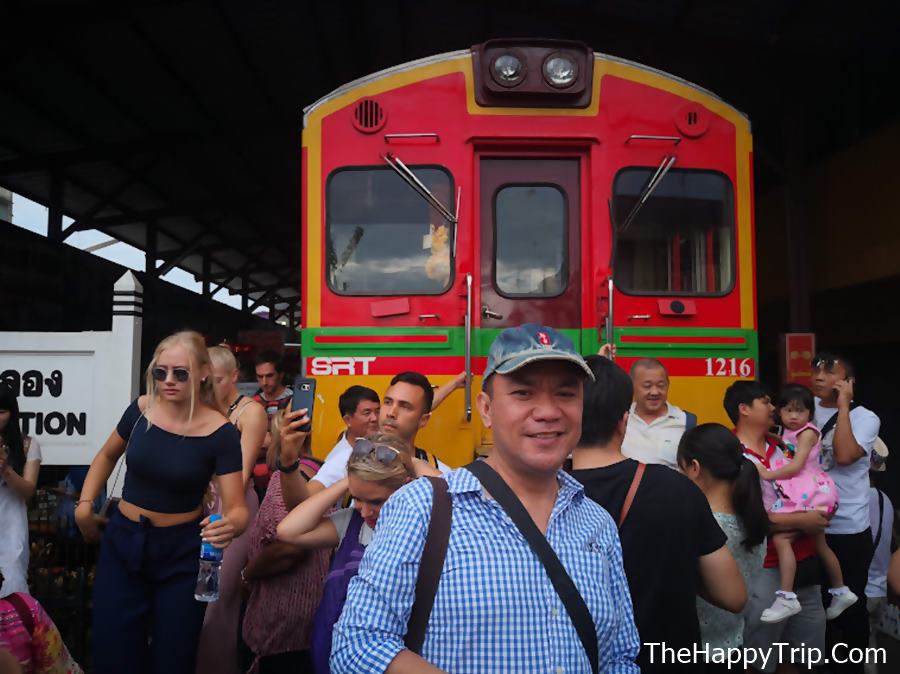 This may sound scary, but it is not. These vendors would open their umbrellas to sell goods while the train is away, and once the signal is given for the train to pass, everyone will remove their umbrella and allow the train to go through. Isn’t fun and unique?

A floating market in a lively and cozy environment, that’s what this place is all about. Listen to music, explore the area, and eat delicious food. More so, explore at night to see the beautiful, magical and beautiful fireflies.

This floating market has only specific dates to operate. So better be aware of it before going here. You may find here local goods like vegetables and fruits as well as other local products. 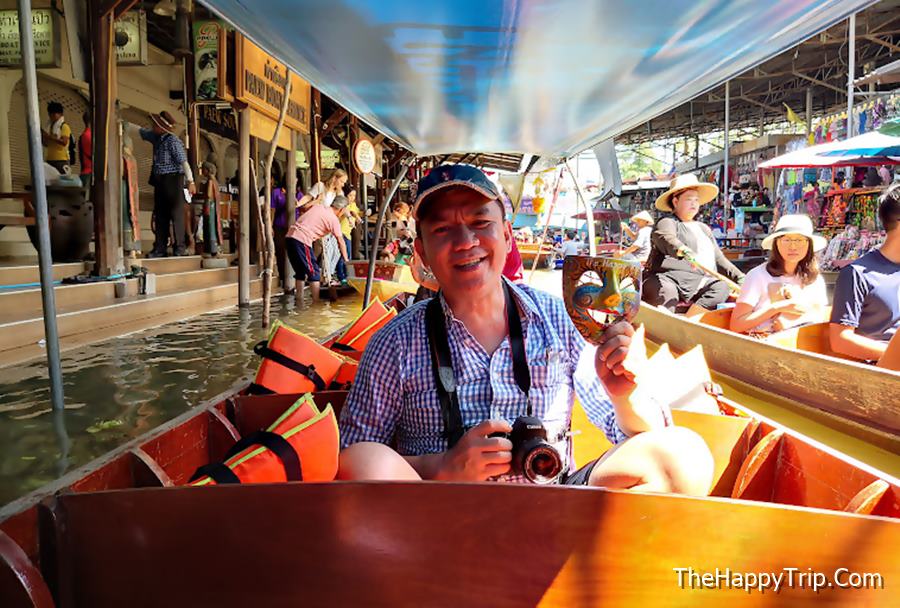 Would you like to buy some agricultural products? Then go over this another old floating market which once served as a trading port between the Thais and the Chinese merchants.

This small ancient market is filled with visitors early in the morning. Do not go here later since the merchants will not be around anymore. They tend to travel from one market to another after this place. Find locals products starting from food to wooden crafts. 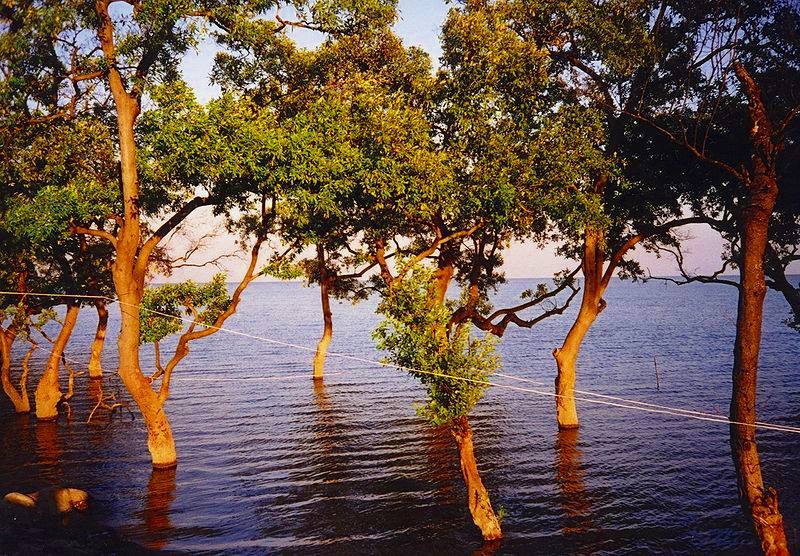 Food trip at its finest, this is what the place is all about. The specialty of the site is seafood since it is nearby the actual water resources. Also, beaches are also available in the area.

This place is a project is dedicated to the Amphawa community and was established by Princess Maha Chakri Sirindhorn. Feel free to visit this place, and you’ll get to experience the culture and tradition of the area.

This mangrove conservation place is a haven for a peaceful community which primarily aims to promote the welfare of the environment as a whole. Visit the area, be one of them, and take part in the change.

Ban Dontri or House of Music

Would you like to get to know more about the traditional Thai music? Then proceed here and get some music lesson. Not only you’ll learn new skills, but you’ll also surely be entertained. 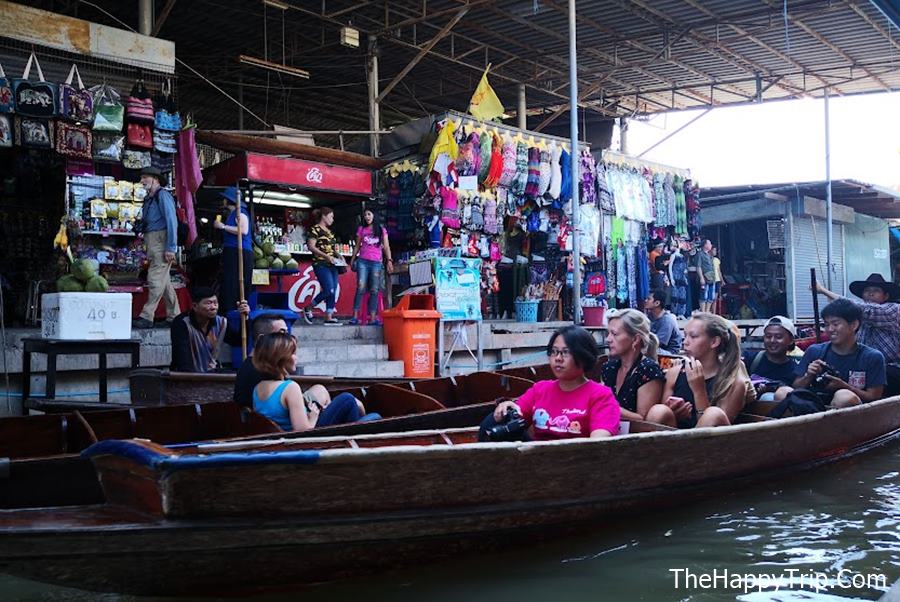 This may be considered as the most extended floating market in the entire province. Aside from shopping from the merchants on the boat, you may also find time walking at the riverside where you could see and visit old wooden houses.

Get to know Suntraporn songs, culture, and tradition through a visit to this restored site for display and exhibit.

Are you a cat lover? Well, this is the exact place where you should be. With the numerous Siamese cat in the area which is being preserved for conservation and research purposes, you’ll for a sure feel ecstatic here.

Orchid lovers would surely love this place! Get to see different variants and species of orchids plus an adventure in a place filled with beautiful butterflies! 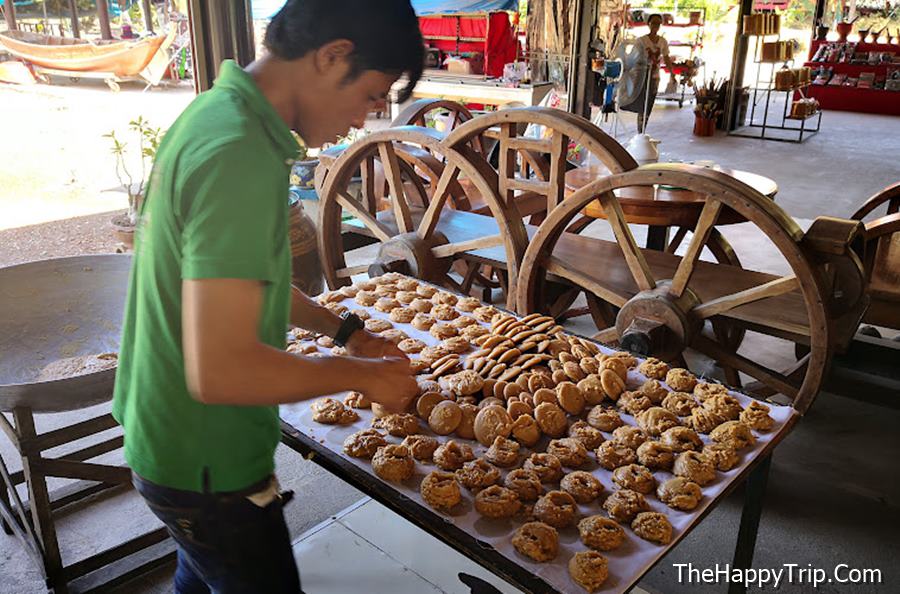 Get to know more of the production and process of making palm sugar, the craft that the place is well known of.

Be educated about the ancient arts and musical aspect of ancient Thailand through a visit to this center. It aims to preserve and cultivate the old ways of arts and music of the country.