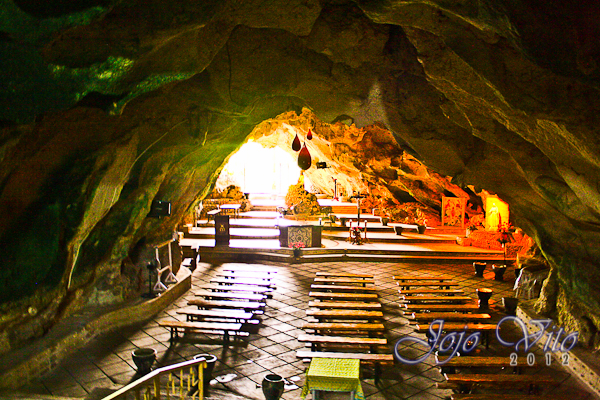 Have you heard about the Monte Cueva in Maasin, Leyte?

This summer, for sure, many will be visiting various places and destinations around the country.

Here’s one place I’m sure you will love to see, the Monte Cueva in Maasin, Leyte.

The challenging steps toward the shrine…The shrine is located at an elevation of 172 meters above sea level overlooking Maasin City.  It was donated by the philanthropists Odong and Loring Chung to the Diocese of Maasin.The place is not for those who are afraid of heights nor for those with weak knees because before you reached the Monte Cueva you must endure first the laborious climb via a zigzagging concrete stairway consisting of more than 550 concrete stairways.

Maasin shrine is a place that is well-known for the Marian devotees. Situated at Monte Cueva Asuncion de la Virgen Shrine, or simply Monte Cueva, this place has been a must-see place for the devotees and the pilgrims. As for its origin, it all started with a dream. The owner of the land who happens to be a lawyer, Joaquin Chung Jr., dreamt of the Lady of the Assumption asking him to put up a shrine in that specific area. He believed in his dream, and so he right away built the church and eventually gave it to the ownership and management of the diocese.

The position of the statue faces the coastal plain with stretched arms, expressing compassion and protection to the city. At the bottom of it, there is a cave with a river which called by the locals as “Aghuba,” meaning to say a mountain cave. What makes this place especially unique is that it is believed that it brings healing to anyone who offers and prays sincerely. This is why devotees and pilgrims gather here to seeking solutions to their problems or ailments, and miraculously, most of them have their wishes granted, making it as a top destination for Catholic believers.

Inside the shrine… The natural characteristics and features of the cave were maintained. In corners of the chapel, I saw some waters dripping from the ceiling.

Additionally, the presence of a shrine named as Monte Cueva gathered many devotees as too. With its close distance from the city center to the actual cave, it will only take 15 to 20 minutes to travel through riding a tricycle. This is also officially built and established as the Shrine of the Most Precious Blood of Jesus as well as the Our Lady of the Assumption. The actual cave from the drop point of the tricycle would entail few minutes of walking, although this did not become a factor for the believers not to flock the place.

There is also a presence of another shrine located in Barangay Mantahan at the top of the Hills of Jalleca. The initiative of the locals as well as the visitors to donate a small amount of money to complete the management and enhancement of the place entirely gave way to its full completion. To reach this place, you have to take the 235 steps which will lead you to the 64-meter statue. The difference between the Monte Cueva and Jalleca Hills is that the latter was not officially announced and even recognized as an official Marian Shrine.

Top most of the hill offering a beautiful view of Maasin. Over the years, the Monte Cueva has become a site for Catholic pilgrims and devotees and has become one of Maasin’s popular tourist destinations.

How to get there:

From city proper of Maasin, just take a ride of the trike and instruct to the driver to bring you to the  Monte Cueva.