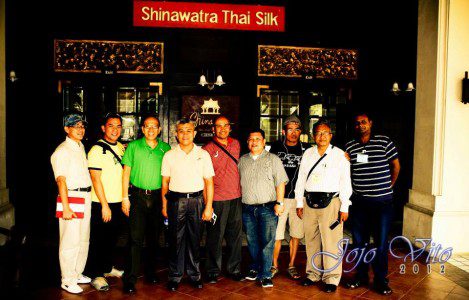 My  friends from Indonesia, Cambodia, India, South Africa and from the Philippines who visited Shinawatra Thai Silk Factory

Amongst the places that I thought very relevant to me being an entrepreneur when I visited Thailand were the handicraft factories, we’ve visited. One of which was The Shinawatra Thai Silk Factory.

The Thais were basically nice and courteous. When we arrived we were greeted nicely by their staff and were given a nice silk floral pin. Then we were offered an herb tea, which I cannot recall how they call it. The only thing that I surely remembered was the taste- it has lemongrass. Humorous as I am, I made a joke upon my first sip of the tea, ”hmmm, parang tinola!” (with matching expression of course). I wonder why nobody laughs at that joke. I just realized I was in the midst of other nationals and nobody understood what Tinola was. In our group, we have Indians, Latinos, Indonesians, Africans, Malaysians, and  4 Filipinos. 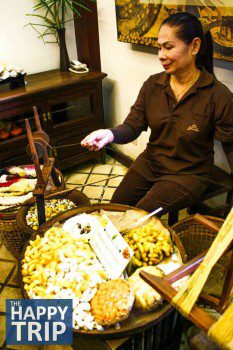 After finishing our tea, we start our tour in the factory. We were given an orientation about the history and business of The Shinawatra Thai Silk Factory.

The Shinawatra Thai Silk Factory has long been a major attraction for visiting Royalty and guests of the Thai government.

It’s quite amazing how the tour was done. After the orientation, we were introduced to the process of making silk. 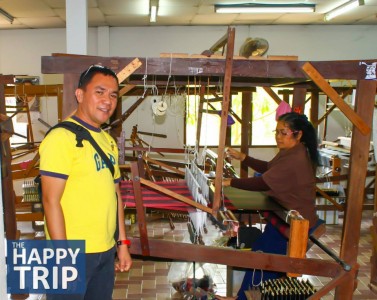 1. Boil clean water in a pot raising temperature to 80 c. Put 40 or 50 silk cocoons into the hot water. The sticky Serricin substance will then melt thereby releasing the silk filaments.

2. Gently push floating cocoons down into the water with a forked stirrer.

3. After a certain time, all the cocoons will float to the surface, they should then be gathered so that the loose filaments of delicate silk can be pulled out and spun together to creating silk threads.

4. Silk filaments, when pulled gently through the forked stirrer, will separate the smooth yarns from the cocoons. The silk thread is then transferred to the wooden pulley, which is attached and secured to the pot before it is placed inside a nearby basket.

6. When a cocoon has been completely reeled out ( each cocoon is made up of a filament between 600 and 900 meters long!) – the silk chrysalis will be placed to the bottom of the pot and can later be cleaned out. 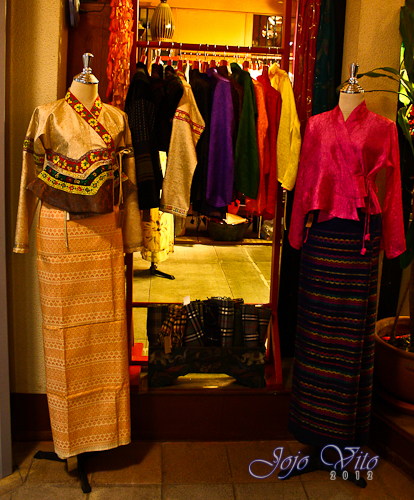