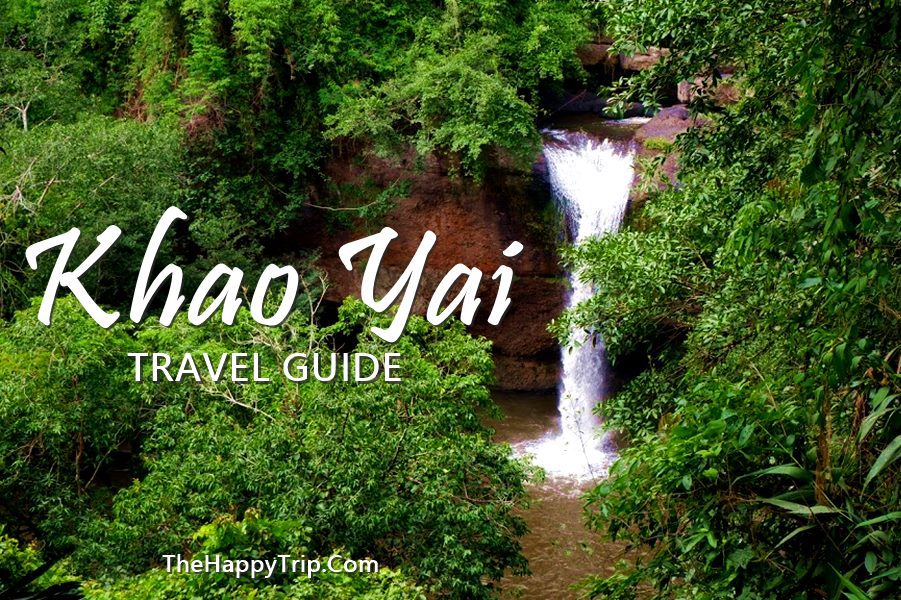 Are you a nature lover or just getting the urge to be in tune with your wild side after watching the live-action adaptation of Lion King? Then I have some good news for you – in addition to the famous golden temples and elephant rides, Thailand also boasts nature reserves near the country’s center for those itching for the great outdoors. One of these nature reserves and the third largest among them is Khao Yai National Park, most part is located in Nakhon Ratchasima Province (Khorat), but some parts also cover Prachinburi, Saraburi, and Nakhon Nayok Provinces. 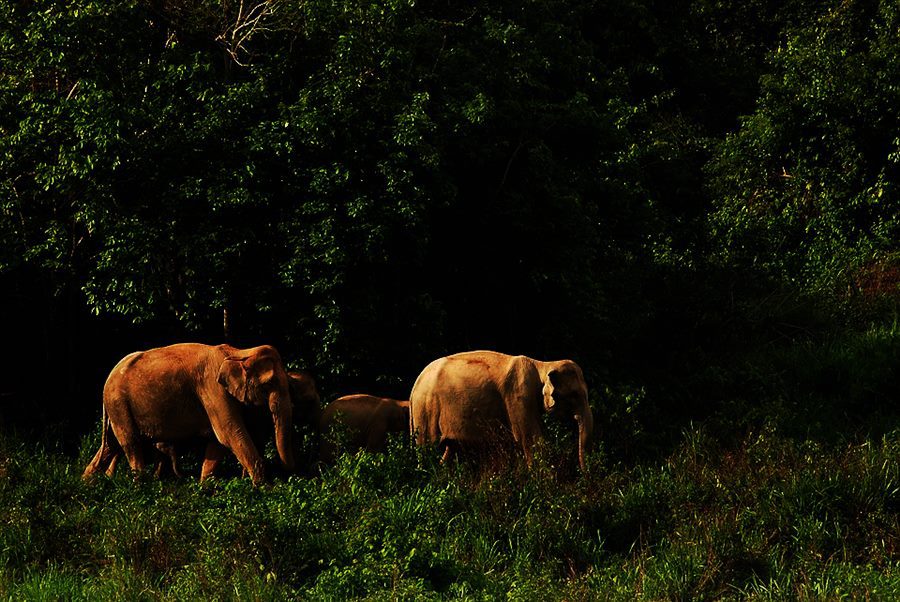 Despite its pristine nature, expect many visitors as it is connected by bus and train from Thailand’s major cities. If you want to avoid the crowds, go through the undeveloped southern areas but take note that once within – there are no amenities and transportation, so come prepared. While all the sights can be visited in a day, it is recommended that you camp for a few days if you want to fully experience everything that this place has to offer. 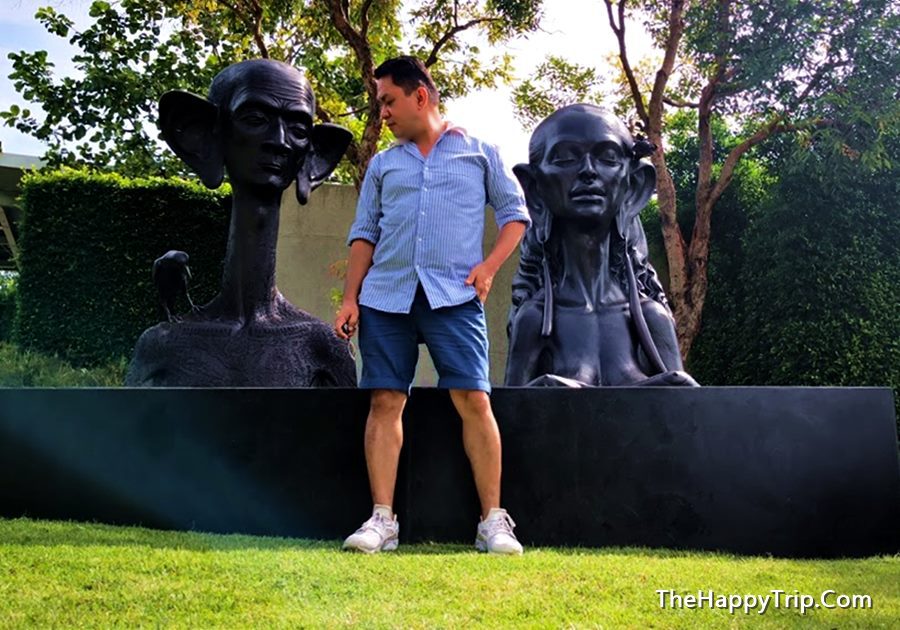 The author at Khao Yai Museum | National Park, Thailand | Things to Do

Things to Do at Khao Yai National Park, Thailand

Even though it is advised that you rough it out, travel agencies do offer guided tours (via hikes or vehicles) of Khao Yai National Park. Park fees are often covered, and guests are usually provided meals and basic protective gear. 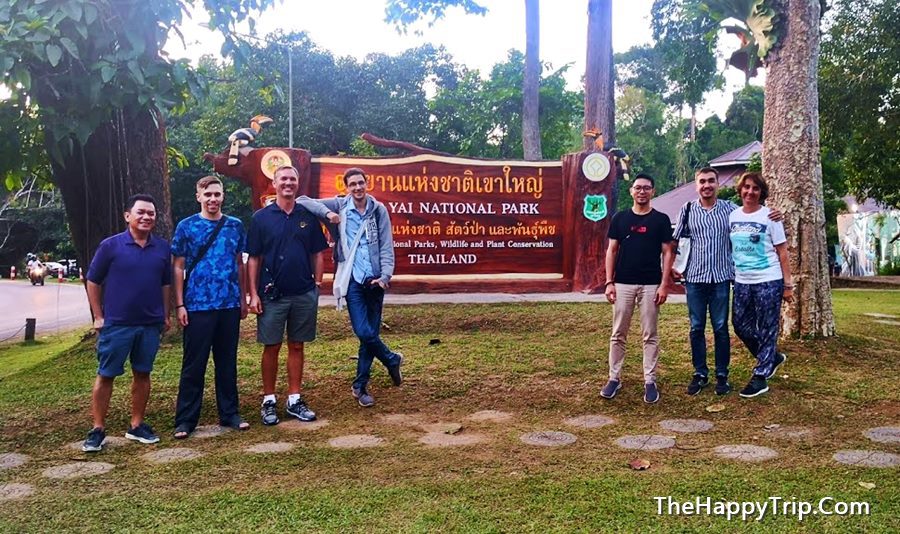 With other bloggers from different countries | Khao Yai National Park, Thailand | Things to Do

If you want to see the majority, if not the entirety, of the park along with neighboring nature reserves from a vantage point, then this is the place for you. The trail is tough (quite steep and no safety rails), but the view from the top is worth the hike. Do take time to read the informative descriptions about flora and fauna on the side of the trail and look out for the actual animals and plants themselves even though you are watching your every step.

You’ll feel like stepping out of the park into the supernatural realm upon stepping into this waterfall. Banyan trees considered the home of spirits and other supernatural beings in Southeast Asian folklore, fill the area, giving it a haunting and spooky vibe. Adding to the overall creepy feel is the supposed origin of the falls’ name – seven sisters drowned in the falls in ancient times hence “chet” (seven) “sao noi” (little girls). 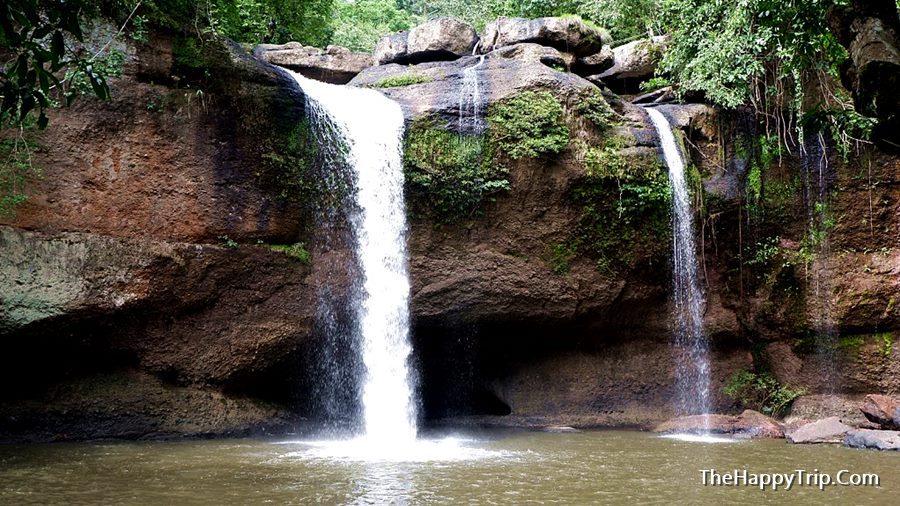 Leonardo Dicaprio’s film “The Beach” made this waterfall famous that some guests attempt to replicate the scene in the movie. However, as with all falls in the park, swimming is prohibited, more so in Haew Suwat due to crocodiles living nearby. The picturesque sight makes the hike worth it, though. 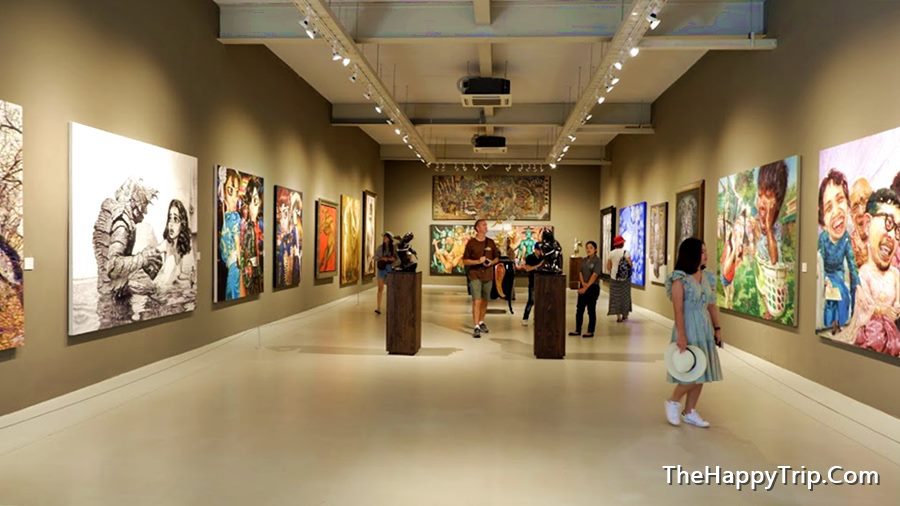 Who would know that an art museum could be found in the vicinity of a nature reserve? But the Khao Yai Art Museum provides a “refreshing” sight for guests of the Khao Yai National Park by giving them a view of paintings and sculptures of famous Thai artists instead of the trees and wildlife guests are accustomed to at this point of their visit. The museum also has event halls, a café, and gift shop.

Guests wanting to swim in the park’s clear lakes and rivers can proceed to Ban Tha Chang Spring, on the northern edges of the Park, to fulfill their wish. The area is shaded by a thick canopy of trees, making it an ideal picnic spot as well. If you didn’t bring any food with you, no worries for nearby hawkers are more than willing to fill your empty stomach. 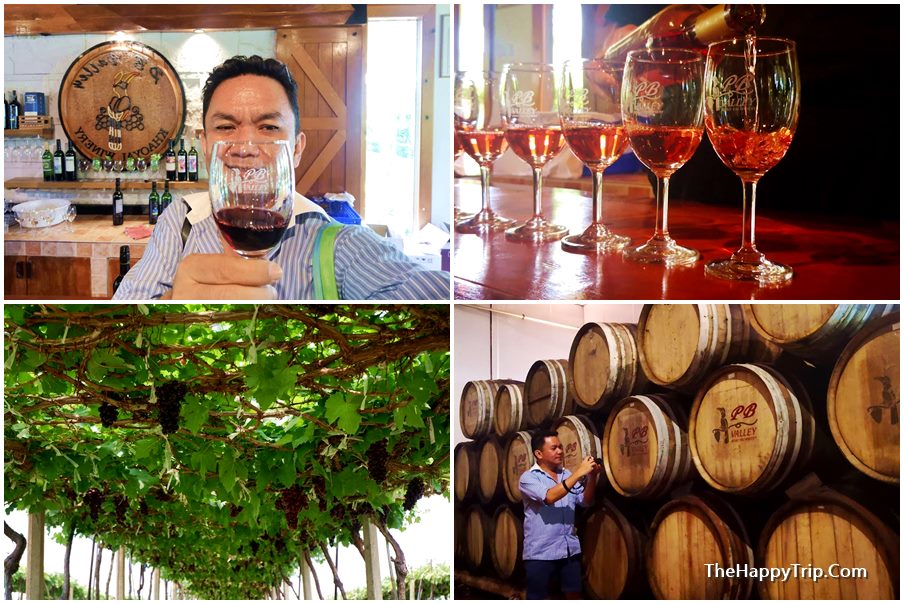 Khao Yai National Park isn’t the only tourist attraction in Khorat Province, for it also boasts wineries and vineyards in the nearby Asoke Valley. Guests can taste samples or purchase the finest wines and dairy products from the numerous farms dotting the countryside as well as observe how said produce is cultivated and processed. At the end of the trail is the awe-inspiring Wat Thep Phithak Punnaram, a giant white Buddha statue seated on the mountainside.

Another attraction near the place perfect for watching sunsets according to the locals. However, being close to a dam means that tourist numbers are heavily regulated for safety purposes, although fisherfolks bravely venture into the lake when water levels are low. 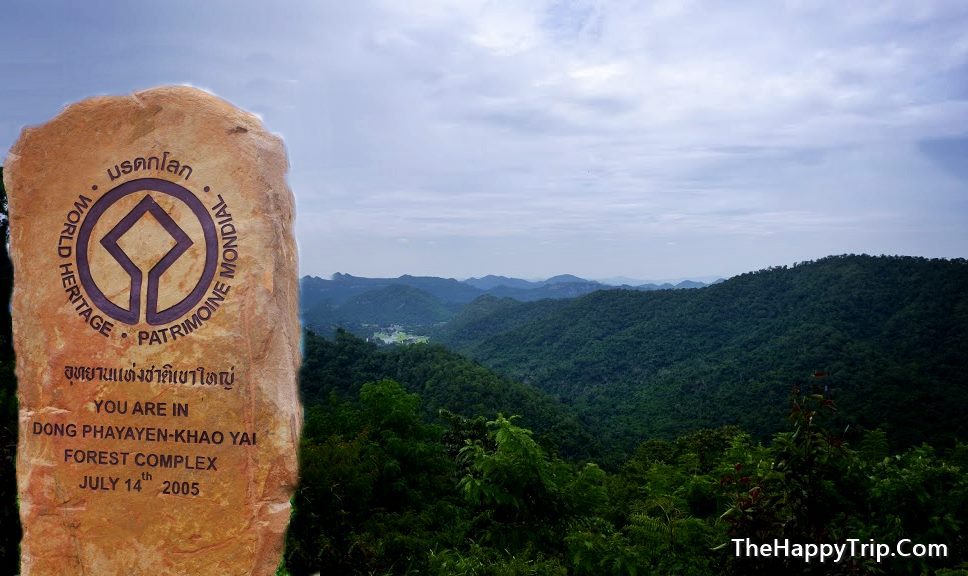 The place covers 230 km between Khao Yai National Park in the west and Ta Phraya National Park on the Cambodian border in the east. The complex has more than 800 species of animals including the endangered ones.

The tallest waterfall at the place with elephant statues and colorful ribbons flanking the famously steep steps to its top, a commemoration of a tragic event in 1992 wherein a herd of elephants fell to its death from the falls. Bring a raincoat as it is reported that guests can be soaked by the spray of the falls in the observation decks. 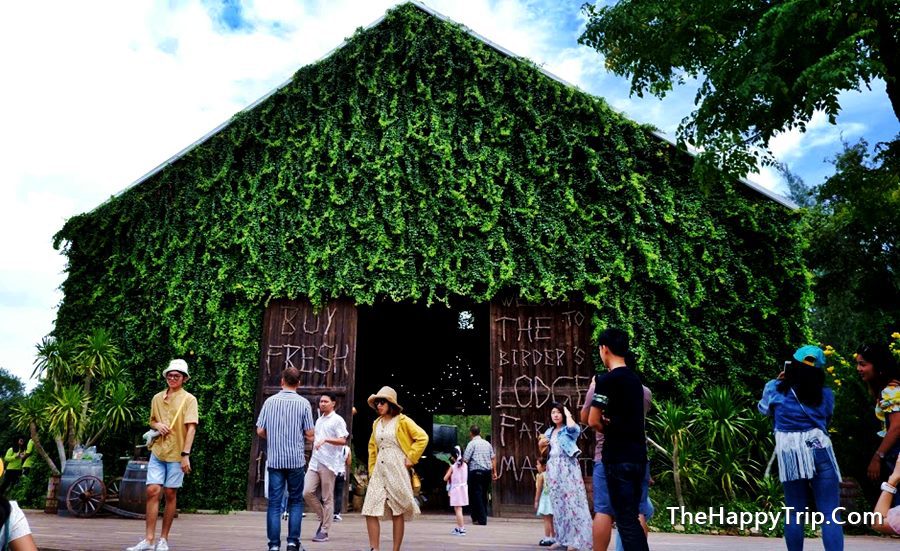 The Birder’s Lodge is a famous place in Kaho Yai. Many tourists and locals from Bangkok would visit the place especially during the weekend to try some food and at the same time buy some fresh produce. 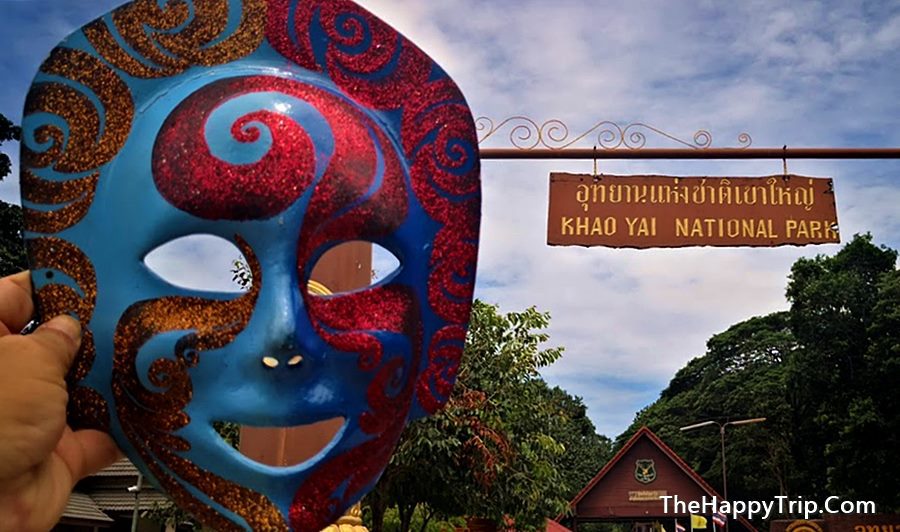 Above are some of the sights in and around the place, and it will be up to intrepid guests to find the rest. There are trails and spots not yet marked or surveyed by the authorities. Park officials even provide guests with maps, although they are strongly advised to avoid exploring at night.

Another activity done within the park is wildlife and bird watching wherein guests camp at certain spots or visit designated viewpoints to catch a glimpse of the local fauna. Just exercise caution, due diligence and preparation in whatever the nature lover in you wants to enjoy in this part of the Thai wilderness as it is “survival of the fittest” out there after all. 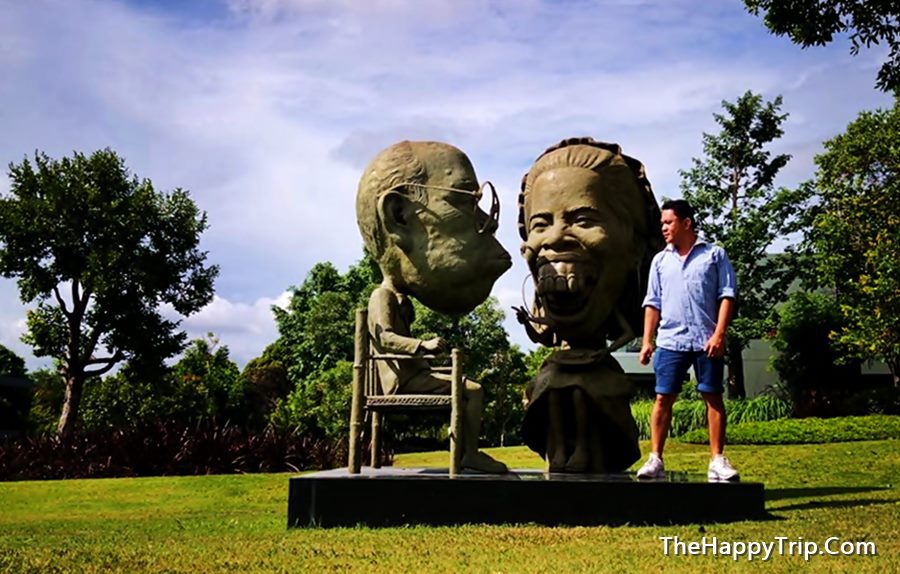 The author at Khao Yai Museum | National Park, Thailand | Things to Do

How to Get to Khao Yai National Park

To visit Khao Yai National Park, you need to get to Pak Chong that is the closest town to the site.
From Bangkok, take the bus at Mo Chit Bus Station, travel time is between 3-4 hours, and the fare is approximately 150-200 THB.

Most guesthouses at the place may pick you up at the station and may also arrange a tour for you.
Admission to the park is 400 THB for international visitors.