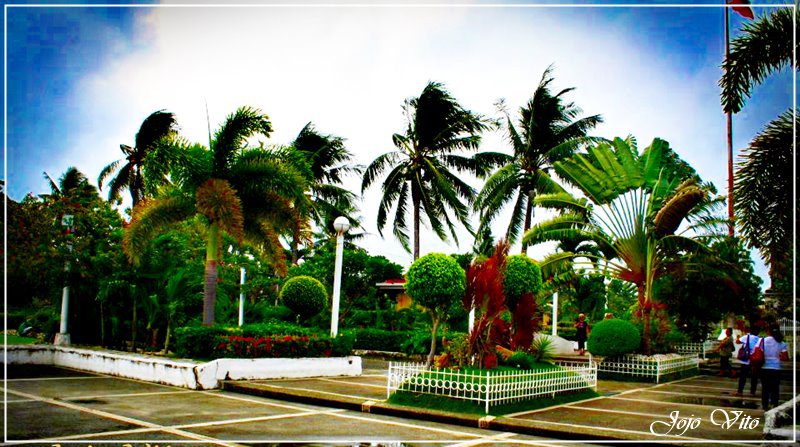 Part of the itinerary I prepared for my siblings in our recent bonding time was a trip to the Mactan Shrine, Cebu City. Apart from  “eating” and “souvenir hunting” I want them to see the Mactan shrine and to review a bit of our  Philippine history. Mactan Shrine houses three important monuments: the Magellan Marker, the Magellan monument, and chieftain Lapu-Lapu’s statue.

It is said that Lapu-Lapu Effigy is the oldest monument in Cebu province. The statue portrays the chieftain, Datu Lapu-Lapu, the reason for Magellan’s death. Lapu-Lapu was rendered in bronze holding a bolo in one hand and the shield in the other. His bravery symbolizes the strong fighting spirit and courage of the Filipino people.

Magellan marker, shaped like a large headstone, says it was in that spot that Magellan fell dead in the hands of Lapu-Lapu.   Few years after the event, Spain colonized the Philippines and ordered a marker to be erected in memory of Magellan. The stone erected on 1866 with a note in the marker mark the actual place where the explorer shed his blood.

Monument of  Magellan, an obelisk on a base of several levels is believed to be the battleground where Magellan died. It measures 30 meters high, located few meters away from Shari-la Mactan Island Resort and part of the jurisdiction of Punta Engaño, Lapu-Lapu City.

Mactan shrine holds the annual celebration, the Kadaugan Sa Mactan by Lapu-Lapu City Government. Every April, the re-enactment of the Battle of Mactan is one sight to behold. One of the most memorable re-enactments of the Batlle of Mactan was on April 27, 2008, with the  Boxing World Champion Manny Pacquiao starred as Philippines hero Lapu-Lapu with actor Dennis Trillo who portrayed Portuguese explorer Ferdinand Magellan and Pacquiao’s wife Jinky played Lapu-Lapu’s wife.

Near the shrine are several stores that sell souvenirs,  native trinkets made of seashells, beads, etc.  where we bought some “Pasalubongs” for our friends back in Bacolod. Also near the shrine are the sutukil restaurants that cook fresh seafood.

Ferdinand Magellan, a Portuguese explorer arrived in Homonhon on March 16, 1521, where Rajah Kolambu advised them to take the route to Cebu for trade. On April 7, Magellan arrived in Cebu (formerly named Zugbo) and was successful in converting the ruler of the place, Rajah Humabon with his wife and his men to Christianity.
Magellan sailed to Mactan and arrived on its shores in Punta Engaño, in the northeastern part of Mactan on the break of April 27, 1521. With an army of soldiers, the colonizers were defeated with 1,500 aggressive men of Lapu-Lapu. Magellan was wounded by a poisoned arrow and was finished by surrounding spears and swords.
Juan Sebastian Elcano, the second-in-command took over the left the place back to Spain.
Magellan was the first Western explorer to arrive in the country and Lapu-Lapu, on the other hand, holds the title of the first Filipino hero who resisted Western colonization.

How To Get There

Most common means of transport is by Taxi which usually seen all over the place. If you want to avoid a long wait for a taxi, you can ask a taxi to wait for you, of course with higher pay.
From Cebu City, it is just a 30-minute ride and accessible by two bridges connecting Mactan Island and mainland Cebu.