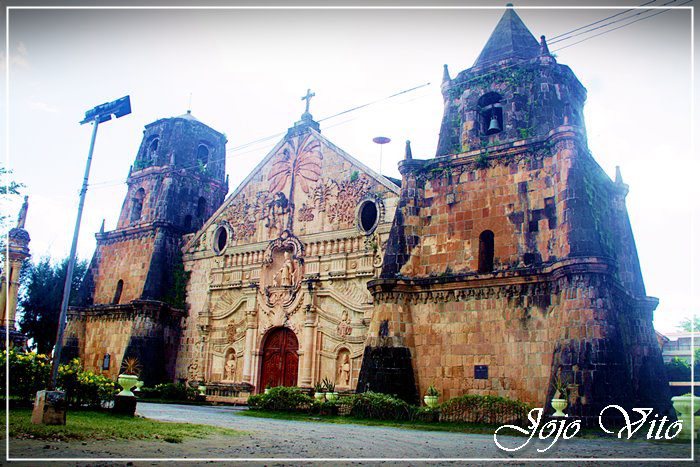 Our last full point with our Old Churches tour from Antique to Iloilo, The Miagao Church. This church is already part of  Iloilo City and in the near future, I will be featuring more of the Old Churches found in Iloilo City.

Irrespective of religious belief, I guess this church is a must-see structure in the Province of Iloilo because of its historical and architectural value. Seeing the Miagao Church from afar was awesome. Its overall architectural style falls under the Baroque-Romanesque architectural style. When compared to other old churches  I have visited in the past, Miagao Church was quite different. The façade looked very clean and not mossy.    Miagao Church was radiant with an ochre color due to the materials used in constructing the church which was adobe (materials used in some houses, even to these days), egg for binders, corals, and limestone.

It is said that the Miagao Church’s foundation is 6 meters deep and the massive stone walls at 1.5 meters thick common to most old churches in the Philippines. The structure was intensified through the use of 4-meter thick flying buttresses may be a bit smaller than that of Paoay Church in  Ilocos Norte which I visited last March of 2014. 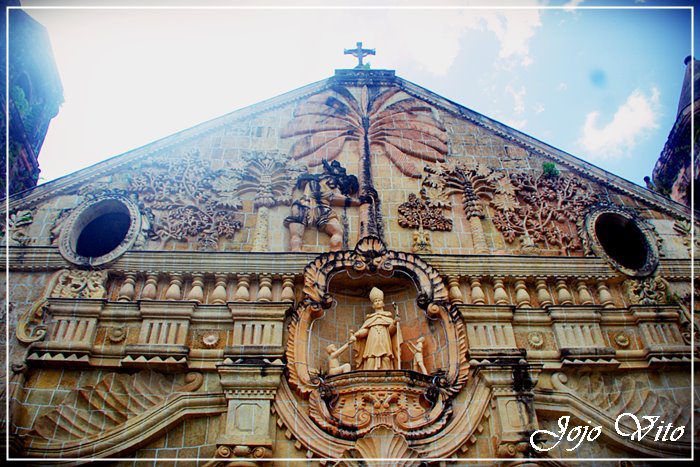 Visually interesting, the façade of Miagao Church has unique elements not commonly found in older churches. It was ornately decorated with a bas-relief in the middle of two huge watchtower belfries on each side. The bas-relief was a mixed influence of Medieval Spanish, Chinese, Muslim and local traditions, and elements. A prominent part of the façade was a coconut tree depicted as the tree of life where St. Christopher holds on. St. Christopher, dressed in local and traditional clothing carrying the Child Jesus on his back. It is said that other elements in the façade are stories of the daily life of the people of Miagao during that time, including native flora (like papaya, coconut and palm tree) and fauna. 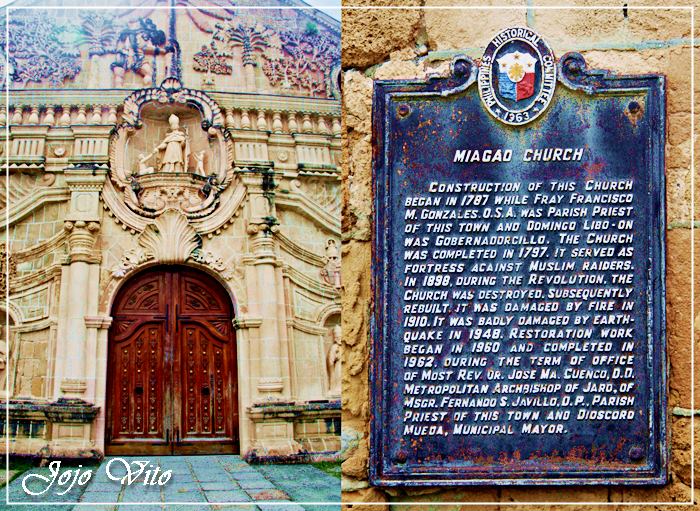 The Miagao  Church was declared as a UNESCO World Heritage Site on December 11, 1993, together with San Agustin Church in Manila; Nuestra Señora de la Asuncion Church in Santa Maria, Ilocos Sur; and San Agustin Church in Paoay, Ilocos Norte under the collective title Baroque Churches of the Philippines, a collection of four Baroque Spanish-era churches.

According to the staff we’ve briefly talked about, they used to cover some walls with cement to avoid some bricks from falling, but UNESCO told them to remove it to show the real bricks. I thought the same thing must be done in the church we’ve visited previously in Anini-y, Antique.

According to history, Miagao Church was formerly a visita of Oton until 1580, Tigbauan until 1592, San Joaquin until 1703 and Guimbal until 1731. It became an independent parish of the Augustinians in 1731 under the advocacy of Saint Thomas of Villanova. With the establishment of the parish, a church and convent were built on land near the sea called Ubos. Father Fernando Camporredondo served as the town’s first parish priest in 1734. When the town experienced frequent Moro invasion in 1741 and 1754, the town moved to a more secure place. From there, a new church was constructed in 1787 through forced labor under the supervision of under Fray Francisco Gonzales, parish priest, and Spanish gobernadorcillo Domingo Libo-on.  After ten years, the church was completed in 1797. It was designed to have thick walls to serve as protection from invaders. It was severely damaged during the Spanish revolution in 1898 but was later rebuilt, fire in 1910, the second World War and earthquake in 1948.

The present-day Miagao Church is the third church built since its establishment in 1731. To preserve the church, it underwent restoration in 1960 and completed in 1962. Miagao Church was declared a national shrine. 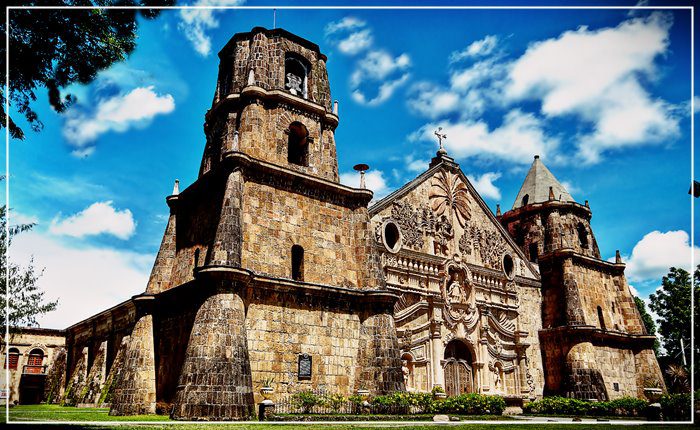 Noticeably, Miagao Church has two huge unequal bell towers directly attached to the main church. Just like in most old churches I’ve seen, especially in the coastal areas, these bell towers served as watchtowers to defend the town against the invasion of Moros. Miagao Church had two different designs since it was commissioned by two different priests. On the left side is the older belfry, the tallest west belfry with four levels its year of construction is unknown to me. Originally, the east belfry was constructed only with two levels. It was in 1830 when Father Francisco Perez decided to add another story to the east belfry. Until now, the east belfry (three levels) is one level shorter than the west belfry (four levels).

The main door was closed during our visit, so we passed through the right side door. Inside Miagao Church was some staff doing the polishing of the floor, which according to him were still original. 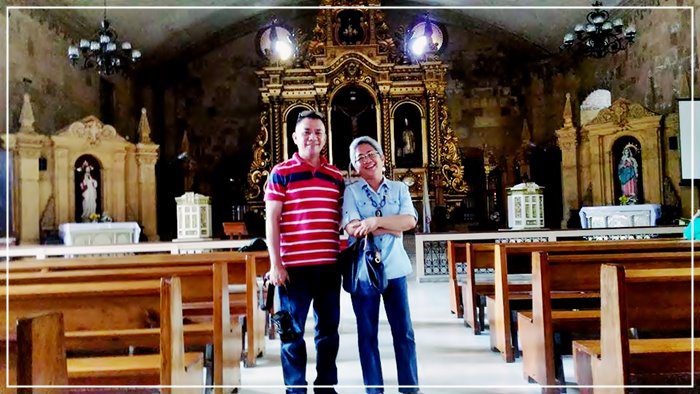 With Ms. Marivic Rio inside the Miagao Church

The most prominent and catchy element inside the Miagao Church was the gold plated retablo. The present altar used was the original altar from the late 1700s that was believed to be lost during the fire of 1910 and discovered during repair excavations in 1982.

It contained three niches. In the middle was the crucifix and on both sides were the statues of its patron saint, St. Thomas of Villanova and St. Joseph. The tabernacle below the crucifix was finished in 98% pure gold and silver. On both sides of the sanctuary were images of the Sacred Heart of Jesus and the Immaculate Heart of Mary dated back in 1780.

HOW TO GET TO MIAGAO, ILOILO

Miagao is strategically located along the Iloilo-Antique road. Because of this, transportation is not a big problem in the municipality. The town proper is located about 40 kilometers from Iloilo City and 57 kilometers from San Jose de Buenavista, Antique.

Buses: Several bus companies operate in Miagao. Buses that ply the Iloilo-Antique, Iloilo-Caticlan via San Jose and Iloilo-Manila routes pass by the municipality every day. Ceres Liner by Vallacar Transit passes by Miagao almost every 30 minutes on its way to Iloilo from Antique and vice versa. Manila-bound buses also pass by Miagao. Dimple Star Transport, Gasat/Valisno Transport, and Ceres Liner pass by Miagao every morning on their way to Manila. In addition, RM Liner also heads to Manila every day but passes by Miagao early in the evening.

The moment you arrive at the place, just get a tricycle and ask the driver to bring you to Miagao Church.