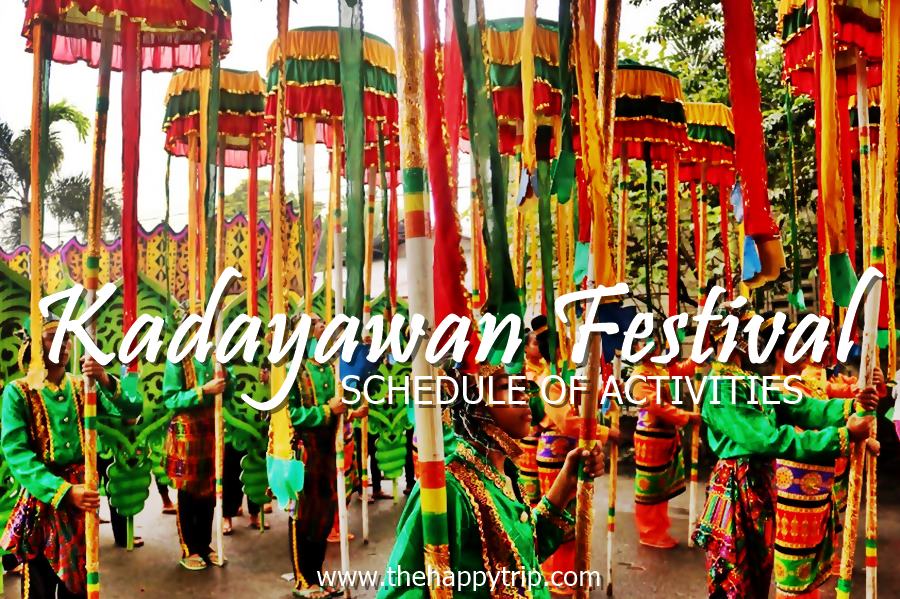 The Kadayawan Festival is an annual celebration in Davao City Philippines. The term “Kadayawan” came from the friendly greeting “Madayaw”, from the Dabawenyo word “dayaw”, meaning good, valuable, superior or beautiful. Kadayawan Festival is a celebration of life, a thanksgiving for the gifts of nature, the wealth of culture, the bounties of harvest and serenity of living. 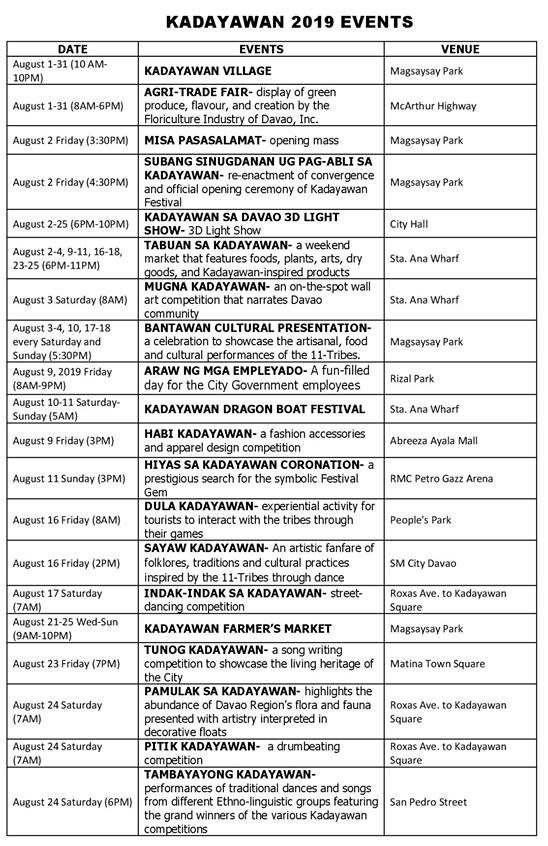 Kadayawan Festival: A Celebration of a Good Harvest

Hearing the place called “Davao City,” a few things come to mind. Apart from being the place once governed by the then-mayor of the city and now-Philippine President Rodrigo Duterte, the city of Davao is also famous for the “king of fruits,” durian, and with the month of August already dawning at the horizon, there comes the highlight to the city’s beloved celebration, the Kadayawan Festival.

Like most events worthy of cheer, the Kadayawan Festival is relished as a celebration meant for thanksgiving of the abundance which nature provides in addition to everything that made the life of the general Davaoeños good. Itself derived from the prehistoric word which goes along the meanings of either “good,” “valued,” or “superior,” the word Kadayawan draws essence from the Davao’s friendly greeting, “madayaw.”

Although the event is now being celebrated without an ostensive religious motif in it, the origin of the Kadayawan festival has roots in the pagan belief of the local Davao tribes, according to historical references.

Originally a gathering for thanksgiving towards the pagan gods Supreme Being and the moon deity, namely Manama and Bulan respectively, tribespeople of Visayas and Davao come at the foot of Mt. Apo—the tallest mountain in all of Philippines—for it was believed that a divine being called “diwata” comes to Earth at that time.

Kadayawan Festival at the Present

As was the tradition, the Kadayawan Festival is celebrated every third week of August and lasts for the duration of a whole week. With nature as its theme and the local tribes as part of the highlight of the event, this once-a-year occasion is replete with lively performances of competitive dancing, a colorful display of art, costumes, and plants, and the showcase of products that are endemic in Davao City.

Specifically, the eclectic showcase of floats via Pamulak, the loud beating of the drums via Pitik Kadayawan, and the mesmerizing movements of the dancers for the Indak-Indak sa Kadalanan make for the core highlights of the event.

But adding more color to the already vibrant event of the Kadayawan Festival are the participants from various provinces that bring a unique flair to the table.

While the locals of Davao City are already familiar with the annual event, each year makes for a refreshing experience as new performances are displayed. But the real impact of the Kadayawan Festival is not towards the locals themselves but rather on tourists who have not seen the occasion first-hand.

The yesteryears of this yearly event had significantly proven how Davao’s bountiful harvests have appeal to foreign tourists not just in taste but also in price. With too much produce to display, crops are nowhere as cheap than in Davao City during the Kadayawan Festival. 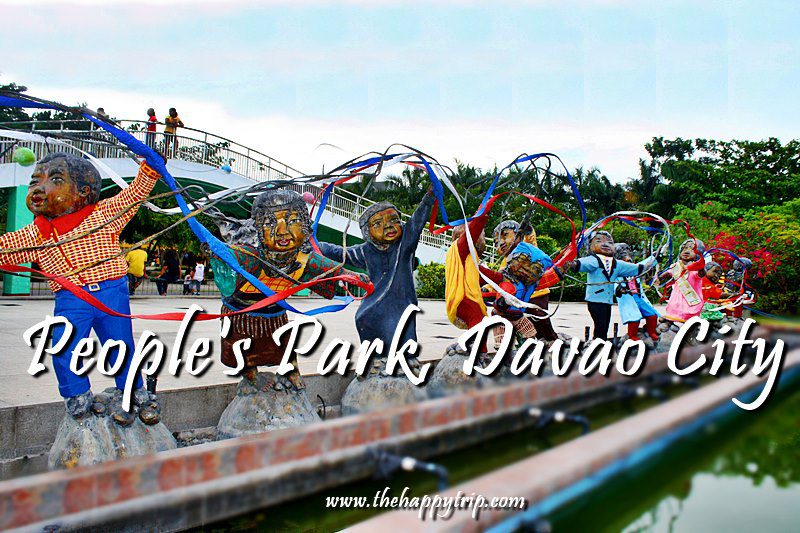 What to do in Davao City | Beyond Kadayawan Festival

I have also included some of my personal experiences in my previous visit to Davao City. You might find this useful in deciding on what other activities you might want to engage when visiting the Kadayawan Festival.

Samal Island is just a minute away from Davao City. The island offers countless interesting activities and places for any guests to enjoy, perfect activities after the Kadayawan Festival. Here are some of the articles which might be of great help should you wish to have a side trip from this beautiful island. 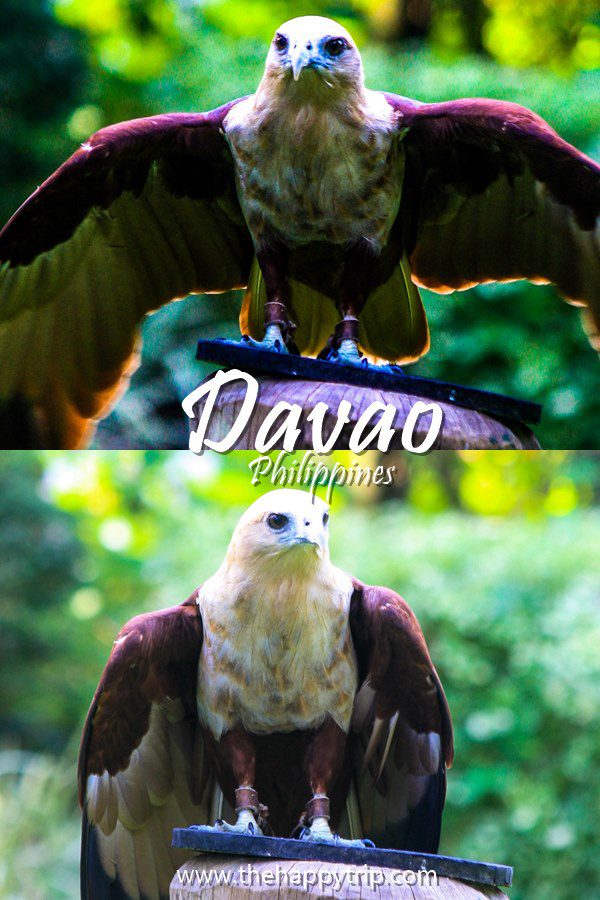 How to Get to Davao City for the Kadayawan Festival

How to go to Davao, By Air

From the airport, there are taxis that can carry passengers into the metropolis. Hotel pick-up can also be set. Another choice is to rent a car if passengers can drive themselves.

How to get to Davao By Sea

Boats have routes going to and from the several islands of the country. Small vessels are accessible for those who are contriving to travel to any other islands near Davao, like Samal Island.

For sure your goal to experience Kadayawan Festival is not only to experience the celebration but also to explore Davao City. Hence, here’s a practical guide in getting around the place.

Taxis take passengers from the urban center and surrounding destinations. Outside Davao’s popular hotels or tourist spots, there are taxi cabs that can be rented.

In addition, a car for lease is available for touring. In that respect are several cars for hire operators located at the airdrome. Apart from that, there are car rental companies situated in offices and major hotels in Davao.  Depending on what sort of rental service the tourists want to avail, the cost of leasing a car generally affordable and reasonable. 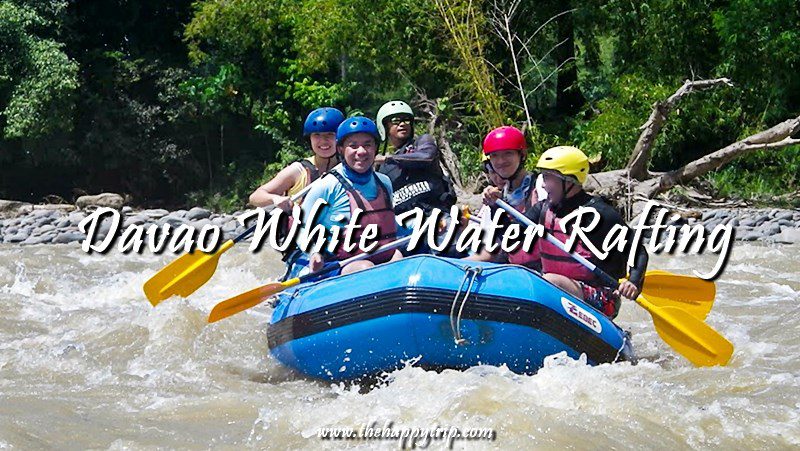 If you wish to experience the Kadayawan Festival, it is highly recommended to book your hotel room in advance.

Here’s the list of various Hotels and Inns in Davao City. It is recommended to book your hotels as soon as possible as thousands of guests are visiting the city during the festival.

Click here for the Hotels and Inns in Davao City

COMPARE RATES AND AND BOOK A ROM HERE