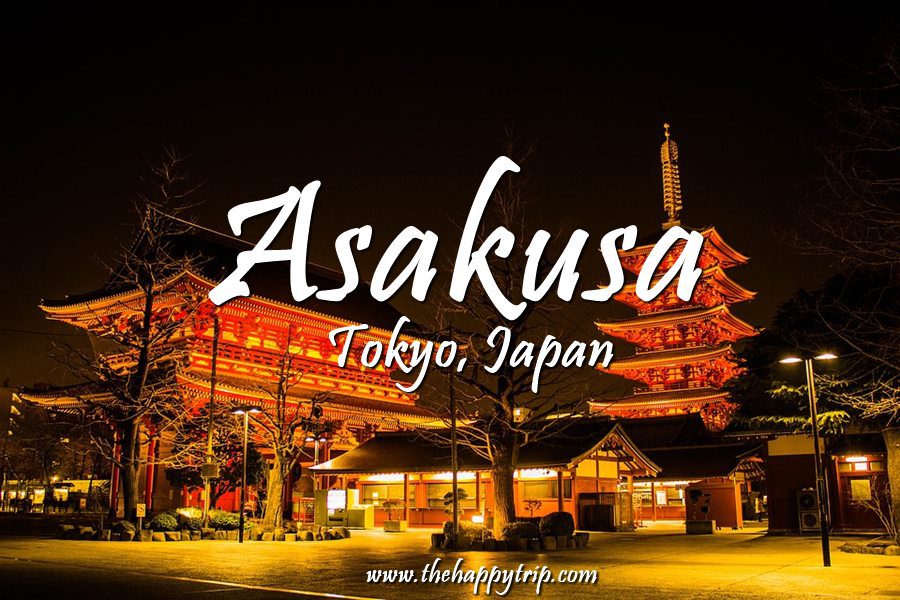 If you are going to visit the Tokyo Sky Tree, take some time to drop by Asakusa. You can find the combination of the traditional and modern culture of Japan in this place. This district has a lot of attractions that are within walking distance. You can easily enjoy the walk from one place to another. Read on to find out what Asakusa has in store for you. 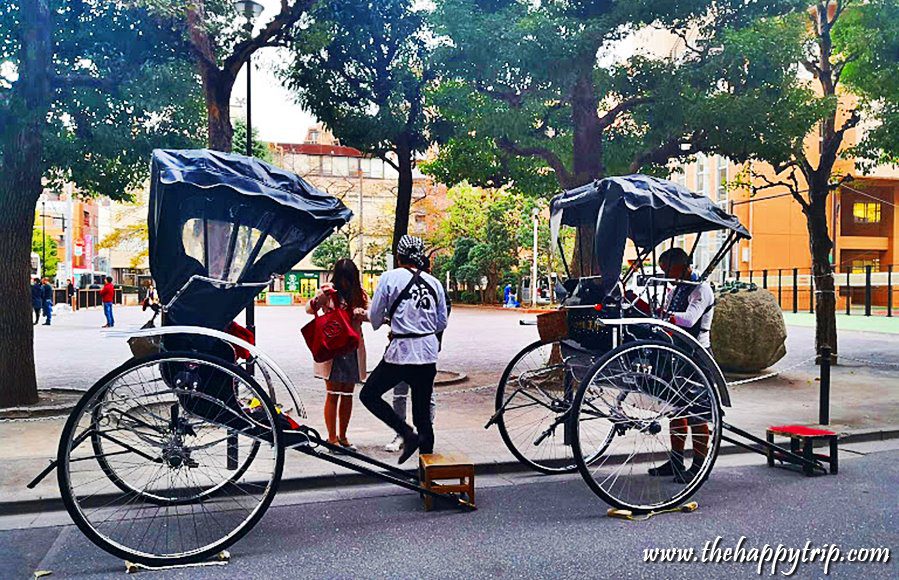 Jinrikisha is a man-powered vehicle that can give a ride to two people. You can easily make a tour in this 30 minutes ride for the price of 9000 yen.

You can easily spot this place because of its architectural design. The site has an observation deck where you can view the Sensoji Temple, the Nakamise Shopping Street and even a look at the Tokyo Sky Tree. As an information tourist center, they also have free wifi, a café, and a tourist information desk that is well versed in multiple languages.

You can easily have a sightseeing trip through the Tokyo Water Bus. From Asakusa,Tokyo, you can go to Hinode Pier while enjoying the beautiful view of Hama Rikyu Garden. From Hinode Pier, you can then ride a ship going to Odaiba.

Sumida Park can be found on both sides of the Sumida River. It is a famous viewing spot of cherry blossoms in the spring and Sumida River Firework display on the last Saturday of July.

The entertainment district used to be incredibly famous before the war. The place now offers cinemas, rakugo theaters, and pachinko parlors.

A small-scale amusement park within Asakusa that has a carousel, Ferris wheel, roller coaster, and Space Shot.

The buildings are actually located in Sumida, but the structures are best viewed from Asakusa, Tokyo. The golden object on top represents the passionate heart of the Asahi Beer Company. You can easily spot the buildings once you exit from Asakusa Station.

This museum is located above the Miyamoto Unosuke Nishi Asakusa store that sells Japanese drums and other festival items. You need to pay 500 yen to enter the exhibit. The store is closed on Mondays, Tuesdays, New Year and Obon. Some of the drums are allowed to be played with by the tourists.

The public bath of Asakusa, Tokyo where you can easily chat with the locals of the area. Access to the bath costs 460 yen, and it is open from 1 pm to 11:30 pm and closed on Tuesdays except for national holidays. 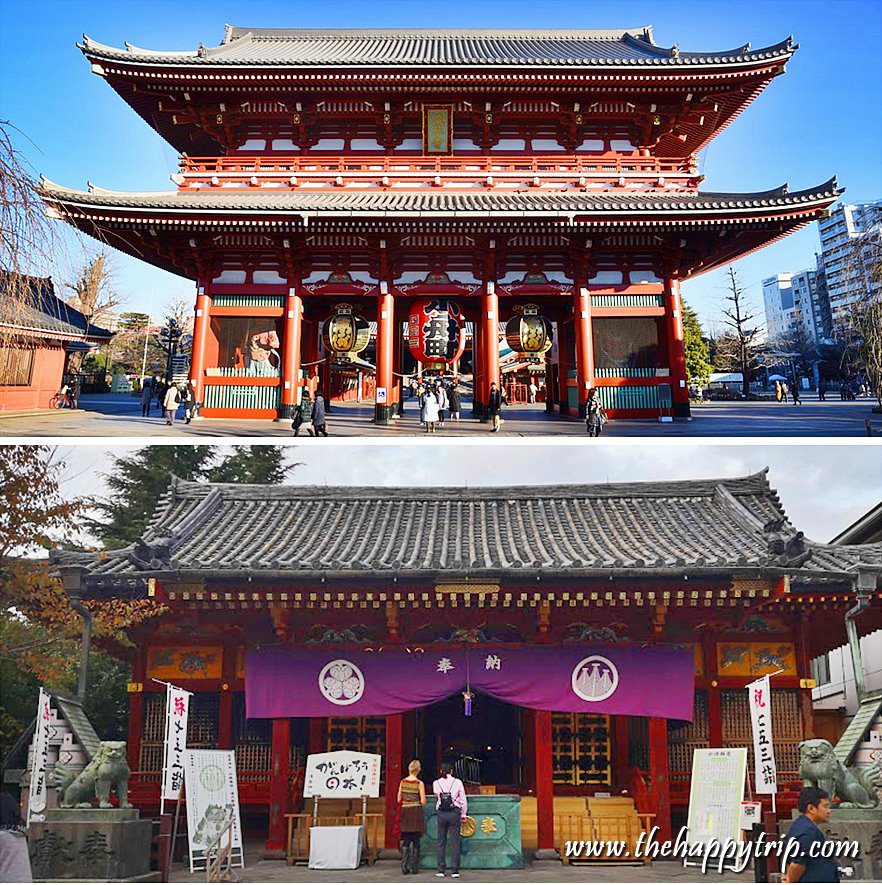 One of the most significant symbols of Asakusa, Tokyo. It is also known as the Kaminari Gate that leads to Sensoji Temple.

This is the oldest temple of Tokyo that was built during the 7th century and has survived World War Two. Though many of the buildings were reconstructed after the war, this temple is the main attraction of Asakusa.

This shrine was built at the time of the Edo period to honor the three men who founded the Sensoji. The best time to visit the shrine is during its festival, Sanja Matsuri, on the weekend of mid-May. 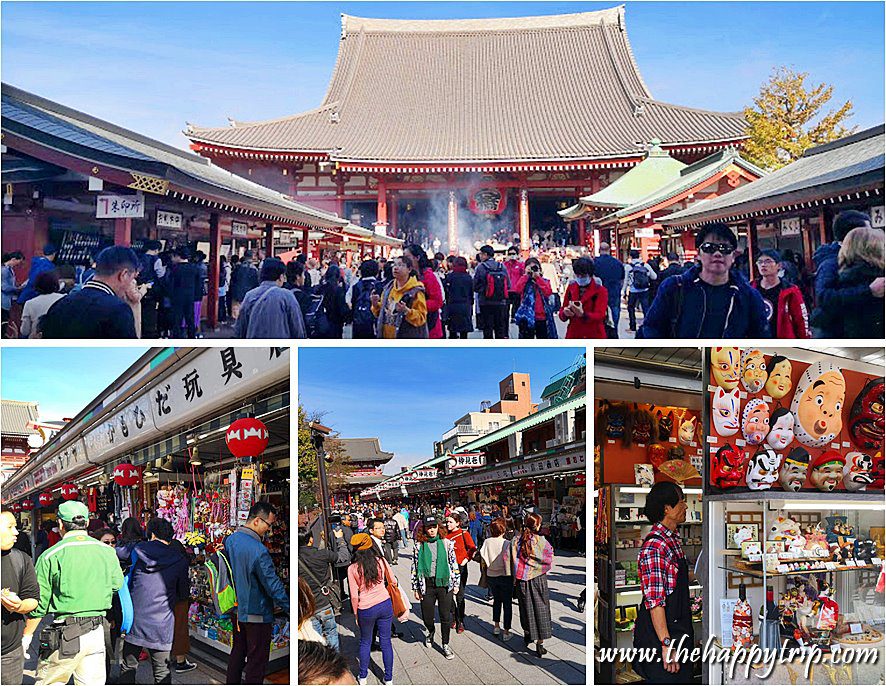 The street you will pass through before you get to Sensoji Temple is the Nakamise Shopping Street. They offer all kinds of snacks and souvenirs that you can buy. The shops are usually open from 9 am to 6 pm.

This shopping street, with restaurants and shops, is perpendicular to Nakamise Shopping Street.

This street mostly caters for restaurant businesses. They sell various items like kitchenware, tableware, appliances, furniture, uniforms, and signage. This street can be a long walk because it is almost one kilometer long. Make sure to visit on weekdays, since many of the shops are closed on Sundays and national holidays.

Get a taste of Japan as you eat and shop in Marugoto Nippon. They offer different kinds of goods and food that showcase the specialty of different prefectures of Japan.

You can shop and be entertained in the Rox Department Store. They also have a supermarket that is open 24 hours in the basement.

Shopping is easy once you drop off at the Tobu Asakusa Train Station, that connects to the different prefectures in the north of Tokyo. The Matsuya Department Store is easily accessible from the station. Built-in 1931, the Matsuya sells goods from long-established brands of Tokyo.

It is a short passageway that connects Tobu Station and Shin Nakamise Shopping Street where you can find shops, restaurants and some old arcade that dates back from the Showa Period (1926-1989). 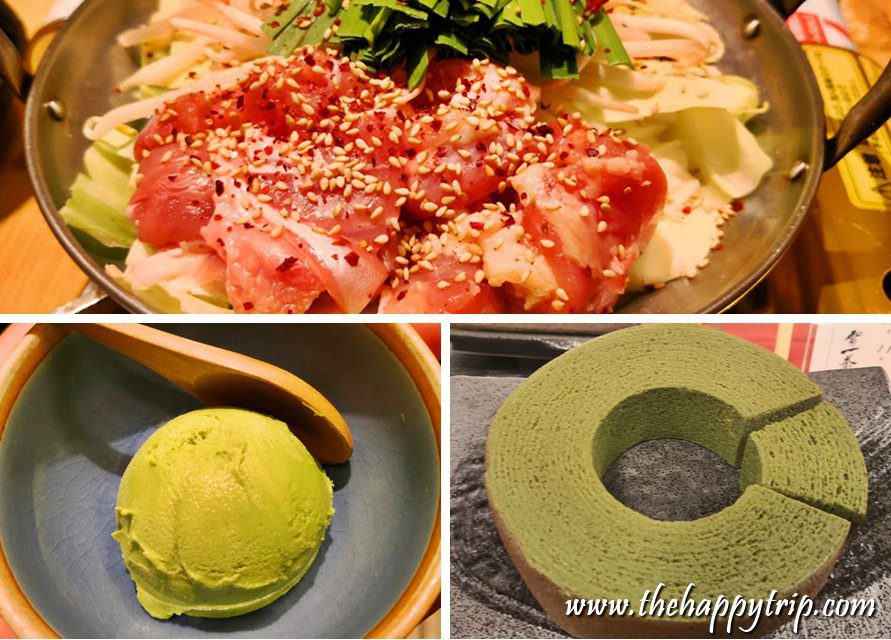 Food and Restaurants in Asakusa,Tokyo

The deeply fried variation of seafood and vegetables are sold in many shops of Asakusa. The seafood comes from Tokyo Bay which made the district well-known during the Edo Period. You can taste Asakusa’s best kind of tempura from Daikokuya, Owariya, or San Sada.

Do you want to experience something different? Try the famous Unagi. The price starts at 2000 yen depending on the time of the day. You can try this food at Hatsuogawa, Irokawa, or Maekawa.

Founded in 1945, this melon-pan store and restaurant are known for their jumbo melon-pan and their variation of ice cream filled melon bread. Their restaurant offers savory food aside from desserts. They open from 9 am until they’re sold out.

One of the famous traditional Japanese sweets shop that is well known for their anmitsu, oshiruko, and kakigori. They also sell take-out desserts like dorayaki in their window store. The shop is closed on Wednesdays and it is only open from 10 am to 8 pm.

A combination of a green tea specialty shop and gelato shop. They sell 14 different flavors of gelato in addition to seven various flavors of matcha. The shop is closed on the third Wednesday of the month and is open from 10 am to 5 pm.

The bar opened in 1881 and it is the only producer of the Denki Bran drink, a brandy concoction, known in Japan. The bar has a window store that sells the bar’s souvenir bottles of Denki Bran. The bar opens from 11:30 am to 10 pm, and the last orders are accepted until 9:30 pm only. They are closed on Tuesdays.

Asakusa is rich in culture and attractions so do not think twice about visiting the place if you are in Tokyo. 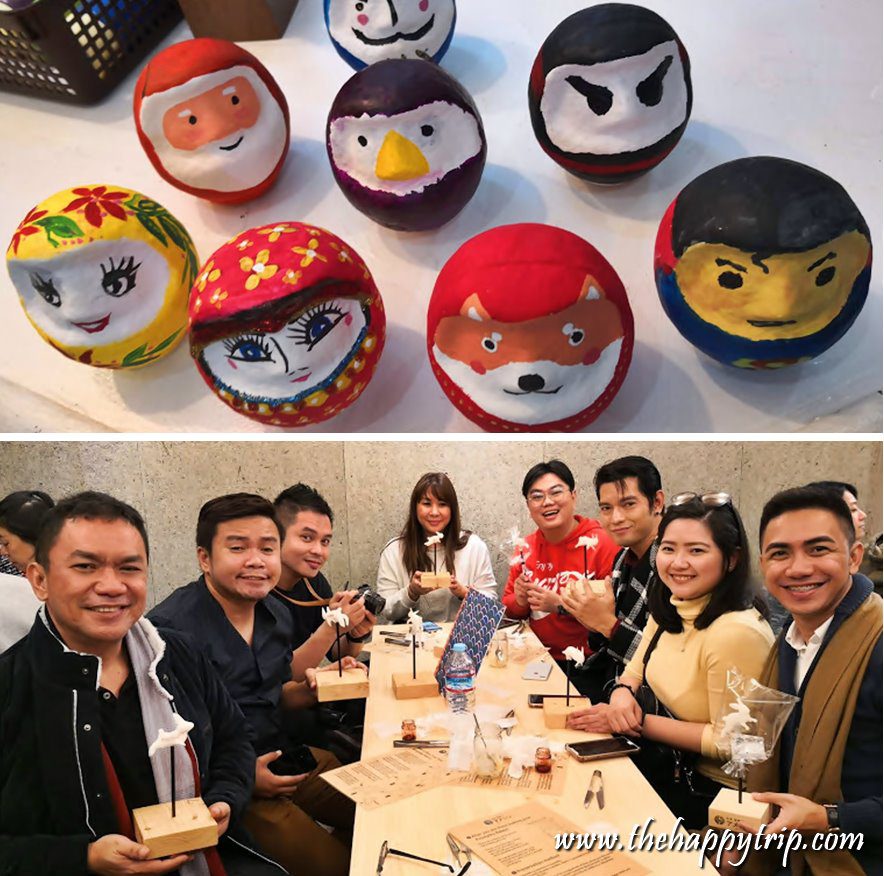 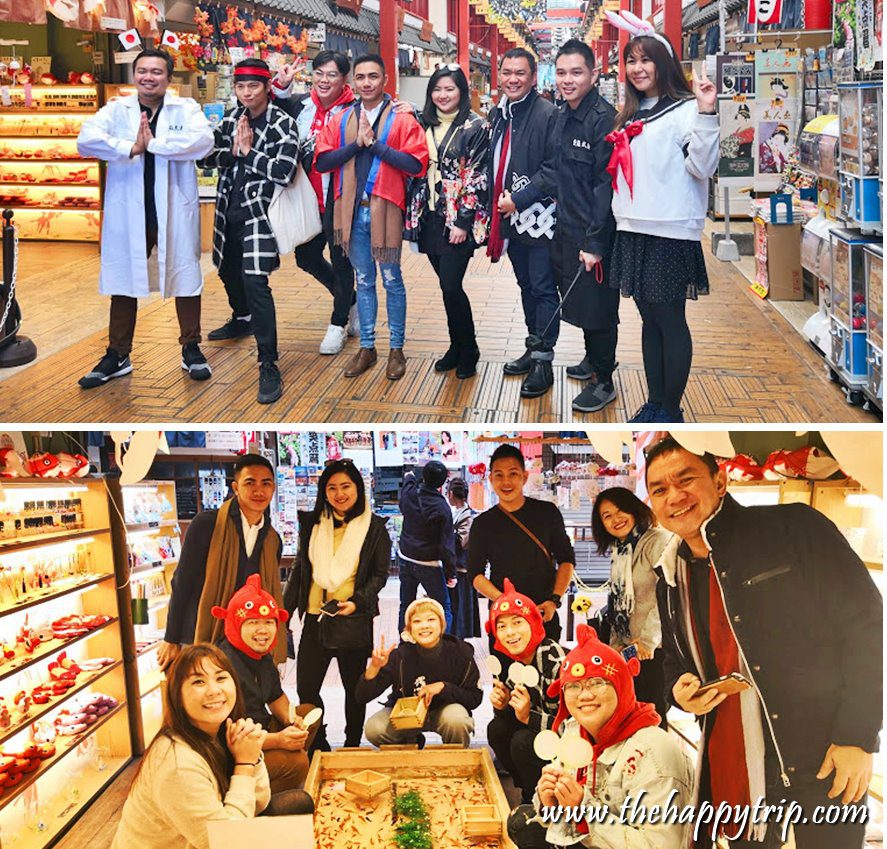 How to get to Asakusa, Tokyo, Japan

Are you finally decided on visiting the place while you are in Tokyo? You can get to the district by riding the train.

You can transfer to the Ginza Subway Line for Asakusa, Tokyo by riding the JR Yamanote Line to Kanda Station.

If coming from Shinjuku, you can take the orange JR Chuo Line to Kanda Station then change trains to Ginza Subway Line to reach Asakusa, Tokyo.

Tokyo, Japan from the Philippines

For people in the Visayas and Mindanao, Cebu Pacific is flying Mactan, Cebu International Airport and Narita, Japan daily. Check the lowest fare at their website www.cebupacificair.com.