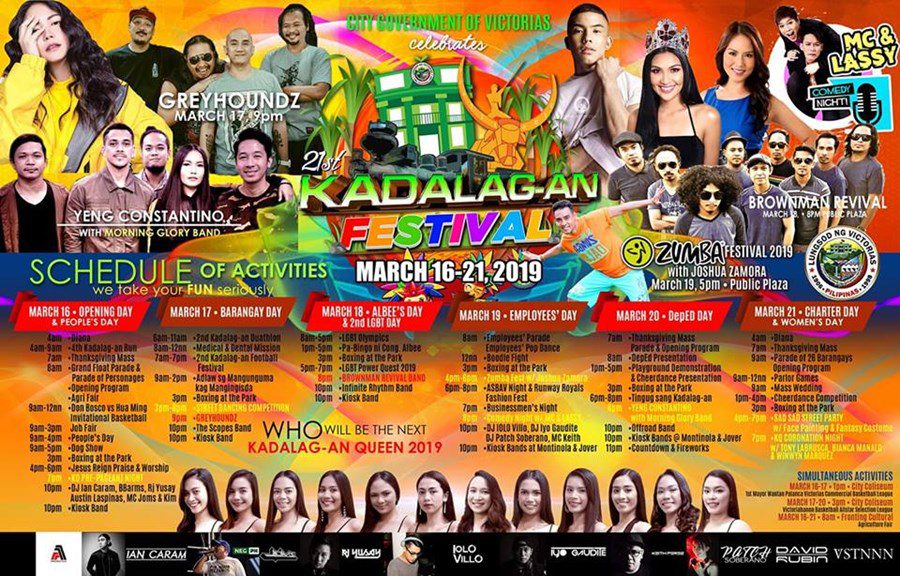 The city of Victorias located at Negros Occidental is one of my favorite local places in the country. Aside from the fact that people are really warm and accommodating, I also love the fact that they have a lot of places to visit and activities to try. The city is considered a 4th class city, and with that, a lot of flourishing industries are also found here such as the Victorias Milling Company, which is the largest sugar finery in the entire country. Consisting of a total of 26 Barangays, the city of Victoria is also a home of some notable places to visit. Some of which is the well-known St. Joseph the Worker Chapel, Mount Silay, and Mount Mandalagan. For more click: Victorias City Travel Guide

All in all, the city celebrates three festivities in a year. They have the Kadalag-an festival, Kalamayan festival, Malihaw festival, and the charter anniversary. Out of the four, the very first celebration that I got to witness was the Kadalag-an festival, and it was indeed a memorable one. Something that I could never forget and something incomparable compared to all other festivities. The one-week celebration of the Kadalag-an festival is one of the things that everyone must see in a lifetime. Locals do celebrate such festivity as a merry-making in commemorating the cityhood of the place from the former municipality. On the Ilonggo language, Kadalag-an means a victory with an embedded meaning of being victorious during the Spanish occupation. Thus, it is a successful event that everyone wants to celebrate. For the previous year, they prepared a lot of activities such as Bingo party, painting contest, singing contest, fashion show, presentations, exhibitions, Zumba revolution, pageant, dance contests, and a massive party at night. Yes, you will never run out of things and activities to do and witness in this festivity. The highlight activities were the parade or dance presentation on the streets of different schools and groups. The costume, the dance movements, the energy, and everything about their performance are just priceless! As you watch the different groups perform, I am sure that you cannot help yourself but to take photos or videos, or even dance with the tune. Yes, that is how lively it will be. The pageant or the search for the Queen of the City of Victorias is also a highlight. Be at the venue, admire the beauty of the finest ladies of the city, and get to be immersed with their wit and charm. Thus, it will end with the announcement of the fairest of them all, and the crowning moment that everyone is waiting for. The part at night which is usually a hit because famous bands and personalities are here to provide the maximum entertainment to all the party-goers. Yearly, the local government tries its best to invite the best and most famous band of the year. Dance with the music, sing your heart-out, meet new people, and enjoy everything about the night of the party. The City of Victorias along with its festivities, most especially the Kadalag-an festival has proved itself worthy of a visit and admiration. I hope that you get to visit the place too, just like I did. Have a Happy Trip!

We will update this post for the 2020 schedule of events

We have outlined a travel guide if you wish to witness the Kadalag-an Festival or visit Victorias City in the future. For more click here: Victorias City Travel Guide

Things to do in Victorias

The City of Victorias is also known for its unique chapel with its Angry Christ Painting. For more click: Church of Angry Christ

How to get to Victorias City

If you are coming from another province, you can take a plane bound for Bacolod City. The moment you arrive at Bacolod Silay Airport, take a van going to the city. (You would know what van to take because the drivers are approaching the arriving guests at the airport.) Ask the driver to drop you to North Ceres Terminal. At the terminal take the Bus bound for Victorias City or any other bus going the northern part of Negros. To ensure that you are getting the right bus, simply ask the people at the terminal on what bus will pass by Victorias City.