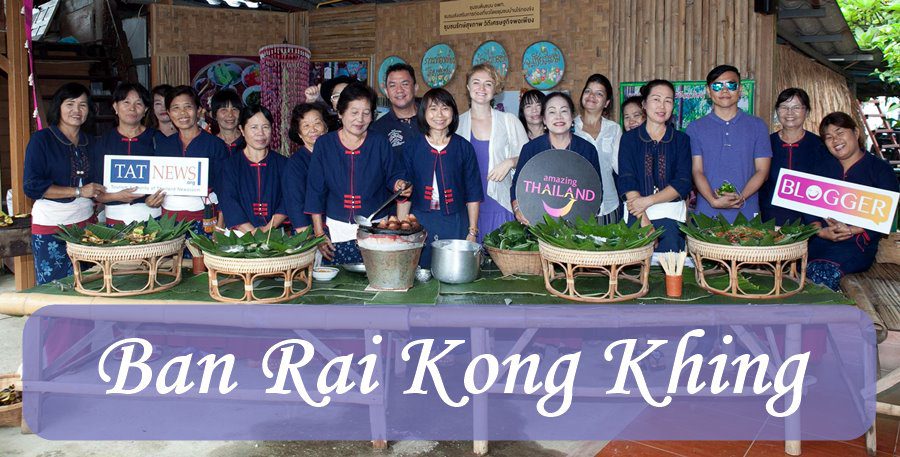 My first visit to Chiang Mai was in 2012. Now, my second visit was courtesy of the Tourism Authority of Thailand’s (TAT) TAT Newsroom Blogger Campaign wherein I was one of the 6 blogger winners from different countries.

On my first visit in this part of Thailand, I haven’t heard of the place  Ban Rai Kong King.  While I read from our itinerary that we will be visiting this place, I really had no idea what the place looks like. Well, the only thing I read about the place was the Yam Khang, a unique kind of massage originated from this place. 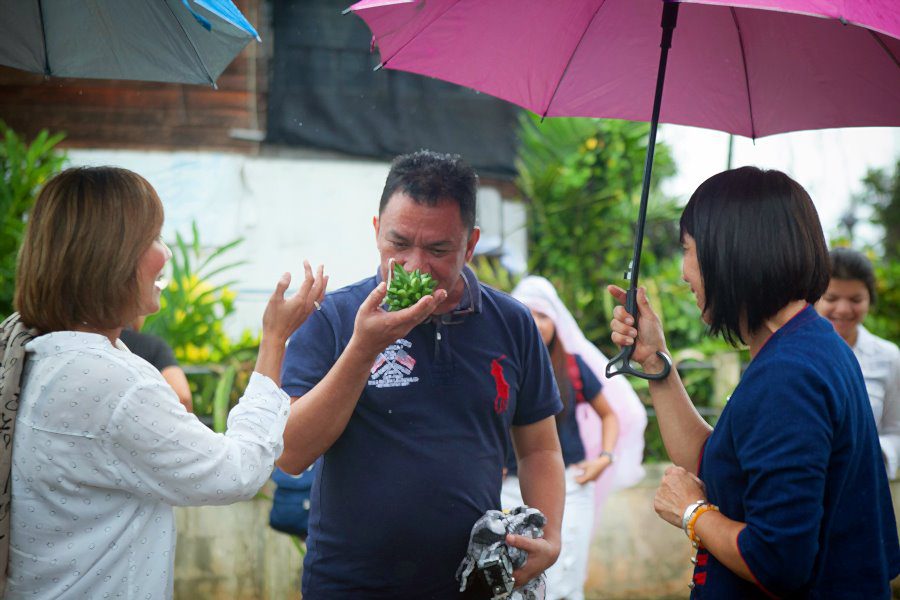 As part of their welcome gift, they presented us is piece of aromatic pandan leaves. Sirima Eamtako head of the organizing team explained to me its use…

Ban Rai Kong Khing is a small village located in the Hang Dong District outside of Chiang Mai. People in this community grouped together to create a health-oriented community with the use of their traditional knowledge in health practices.

The village began to attract tourists through the sustainable tourism services they offered such as community tours, organic food, traditional Lanna massages and herbal products. Because of this, they were given a Tourism Award last September by the Tourism Authority of Thailand. 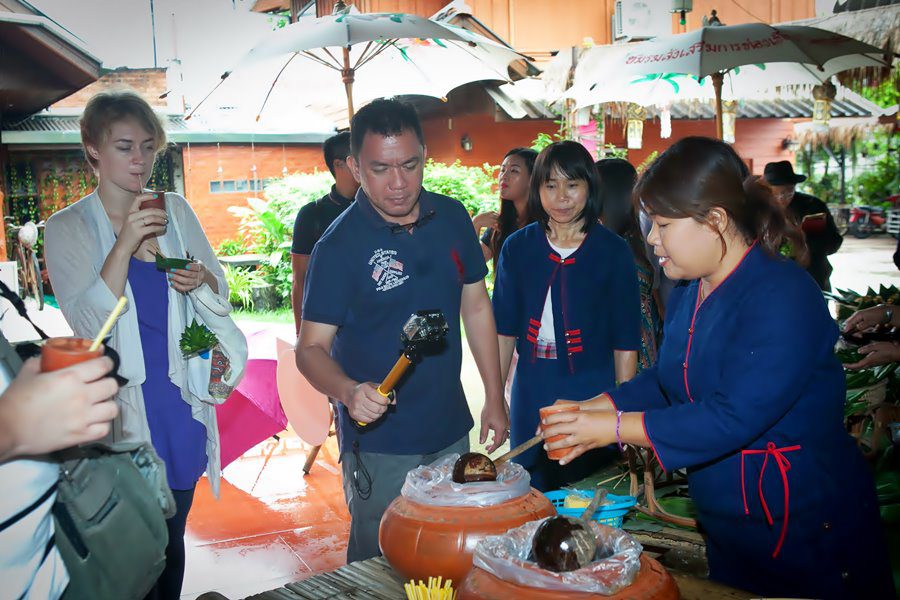 we just arrived from a heavy lunch prepared by TATNewsroom but i forced myself to try what the community had prepared ….well ,they offered great tasting local delicacies and drinks

There was a little rain shower when we arrived at the Center of the village. Nonetheless, we were cordially received by the group of men and women running the center.

And what’s the best way to treat a guest? Yes, we were welcomed by the traditional delicacies which they prepared for us to try. 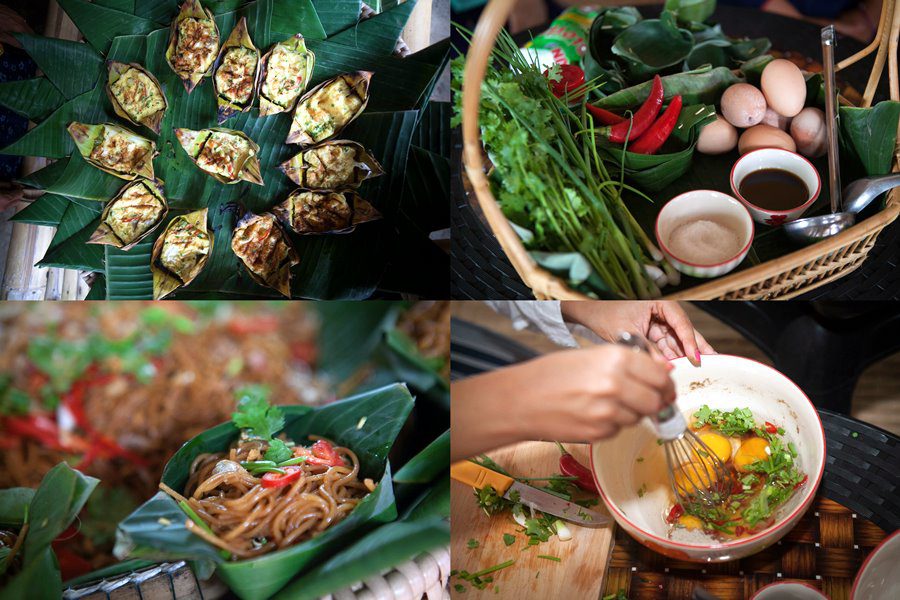 and how can say no to this feast? 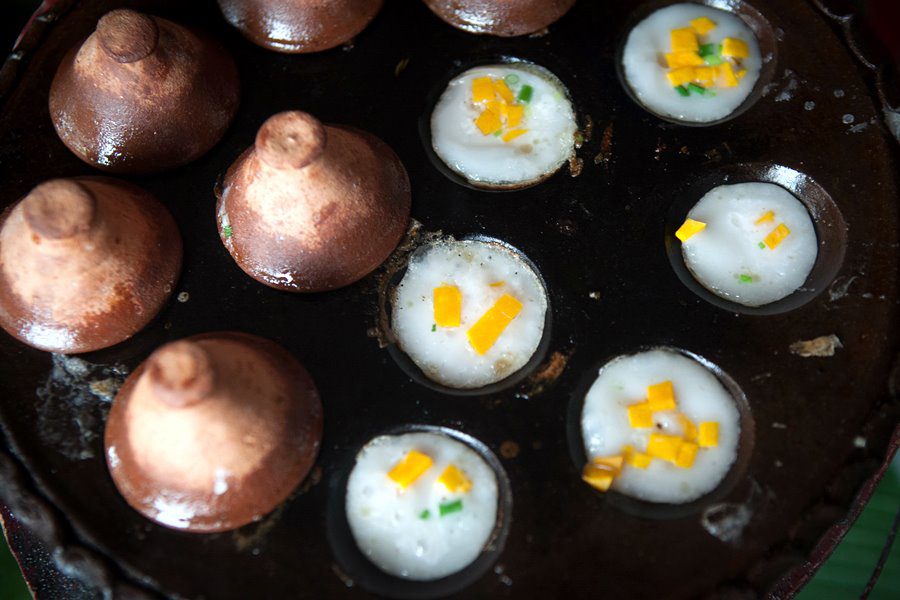 I mentioned in my previous posts, that I had the flu when I visited Thailand. I was very excited because we will be treated by a traditional Lanna massage which was said to have been originated from the place, the Yam Khang. There were not many articles written about this therapy. But one thing I knew, they will be using fire for this massage which made me very excited. 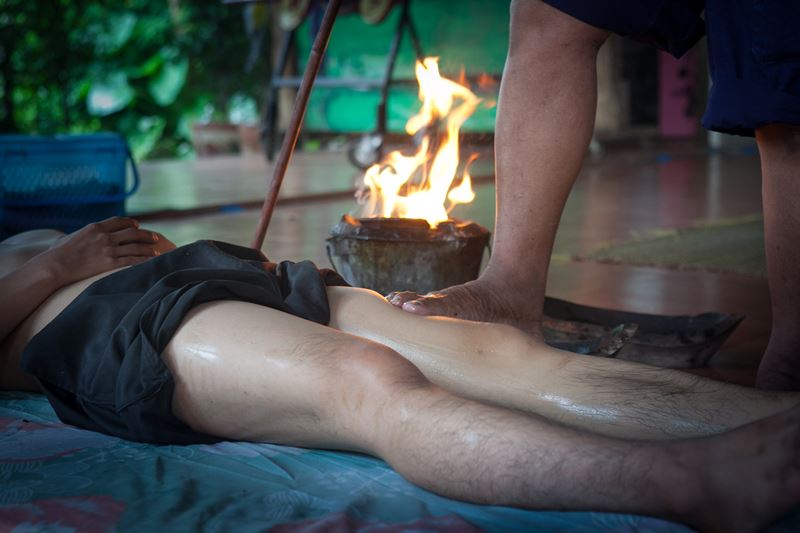 its qyite surprising to note that while the massuer is only using his feet, ke knew well where to press producing a very soothing effect

According to their tradition, not everyone can do the message. Some of the requirements for one to do this therapy includes  spiritual maturity, high ethics, and virtues among others. To date, only three therapists are qualified to do the handling.

I was one of the first who volunteered to go first. I was made to strip my top shirt and change my pants into shorts which they likewise offer. For women… Oh well, they didn’t go topless- of course! 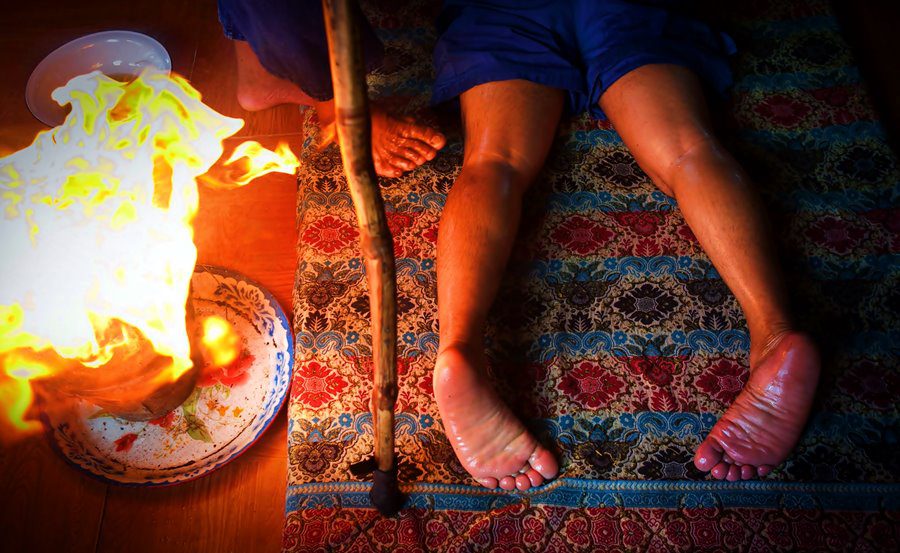 in doing the  Yam Khang Fire Massage, the massuer uses a stick to balance his body while his other feet is working on the client’s body

All the therapists were in their late 50’s or mid 60’s or even older (I am not certain).

To do the treatment, the masseurs first bathe their feet in a therapeutic healing water infused with herbs and mixed with oil. Next, they heat their feet by slipping it on a hot iron plate resting above the coals, then took off to massage using their feet. The masseur used a stick to balance his body, while one of his feet was working on my body.  I know that the plate was very hot as I can sense the sudden shock of heat in my flesh.

Once in a while, the therapist would sprinkle some oil into the fire to keep it burning. The heat transferred to my body was very soothing and relaxing. Not only that, I was quite surprised that while he was only using his feet, he knew very well where to press. 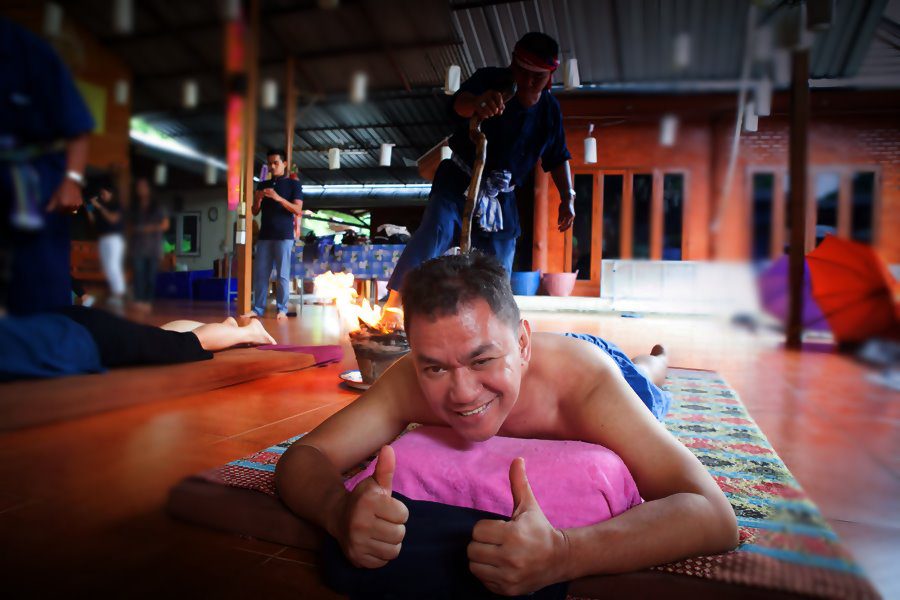 a satisfied client after the YamKhang Fire Massage

Another highlight of our visit was the cooking demonstration prepared by the women of the community. I enjoyed it a lot as the food they prepared has a great semblance to some of the local delicacies in my country, the Philippines. 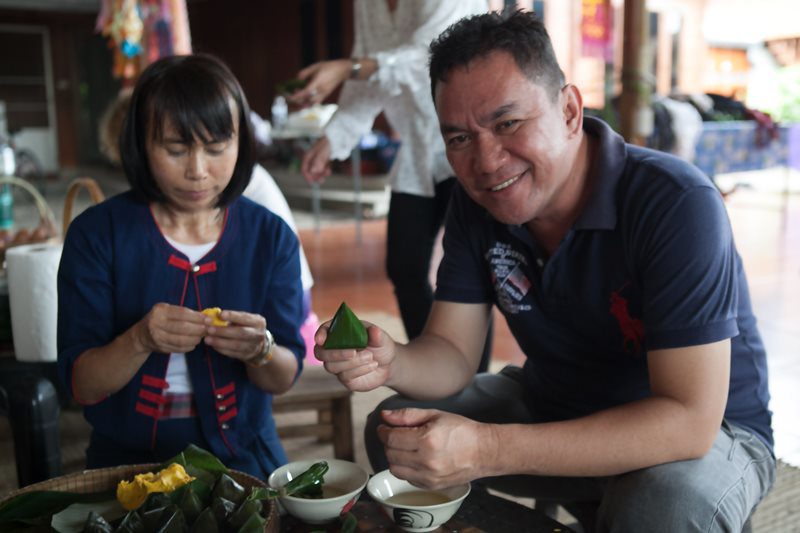 trying to help packing this local delicacy made primarily from squash