The place of Banaue, Ifugao, is well-known for the majestic and one of a kind rice terraces. Who would not be familiar with it? We all grew up seeing posters of the scenic place, and we just cannot help but feel proud that such an amazing place is located in our very own country. The place, as well also all know, is a place devoted to planting different crops most especially grains of rice. The locals were able to come up with a celebration that serves as a thanksgiving for the bountiful harvest that they can have, the Imbayah festival. Celebrated during April every three years, the locals came up with the idea of honoring their local god, Aliguyon, for being so generous in giving them the harvests for the past three years.

If you think that this might be a not so interesting celebration, then you got it all wrong. The feast is focused on different areas and products of the entire province such as the making of wine, walling of stone, and planting of rice. The actual derivation of the Imbayah festival came from the local word “Bayah” which refers to a rice wine whereas the word “Bumayah,” as well as “Imbuyah,” refers to the concept of having a bountiful harvest. Combining the two local terms paved the way to the birth of the festivity, the Imbayah. During ancient times, this celebration was only limited to the elite members of the tribes. But now, this is freely open for all because it is also a way of sharing their tribes’ culture and tradition.

People will wear their special clothes and ornaments and begin to do different acts of merry-making outside while having fun with the other locals or neighbors. They sing, dance, and share stories, making it a unique and fun communal activity. There is also an ethnic parade with street dancing which primarily aims to share their values and traditions. Though it may not be as flamboyant as the other festivities of the country, the simplicity and natural vibe of the celebration is what makes it unique among the rest. People would usually bring out their antique collections and treasures for viewing purposes for visitors. They also hold a rice wine tasting contest, a public lunch, weaving of women, wood carving presentation, catching of greased pig, playing ethnic games for the kids, and playing of indigenous musical instruments along with communal dancing and singing. As for the aspect of sports, they also have boxing, taekwondo, and volleyball tournaments. The exhibition of the locally produced wooden scooter is also one of the highlights of the festivity.

With the beauty of the place and the contagious joyful vibes of the locals, you will surely enjoy visiting the place and being one with their celebration. Not only you will feel the vacation that you want to have, but you will also have a glimpse of how people of Ifugao do their festivities, something that not all were given a chance to do so. 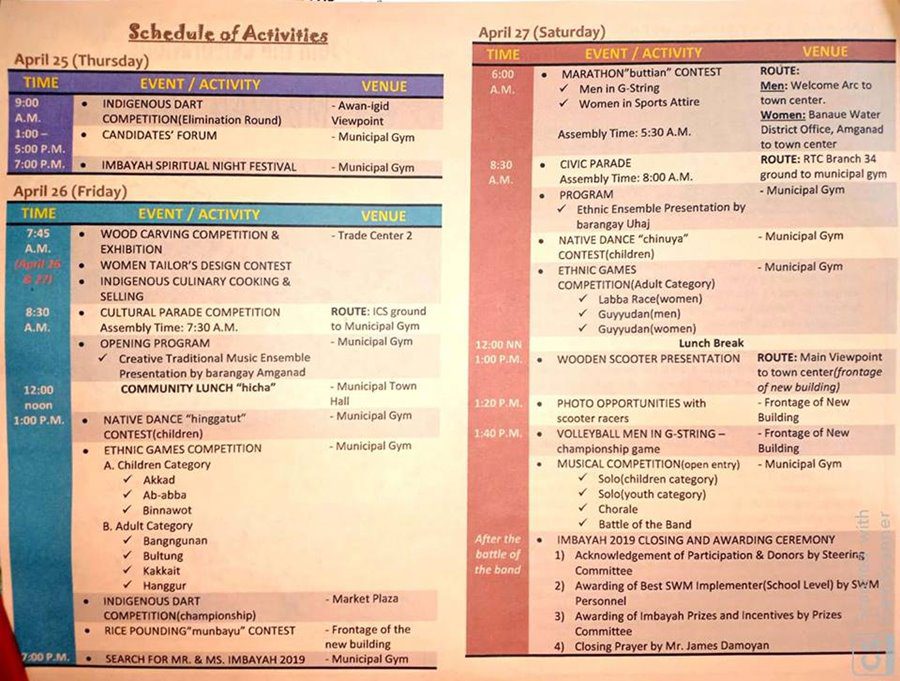