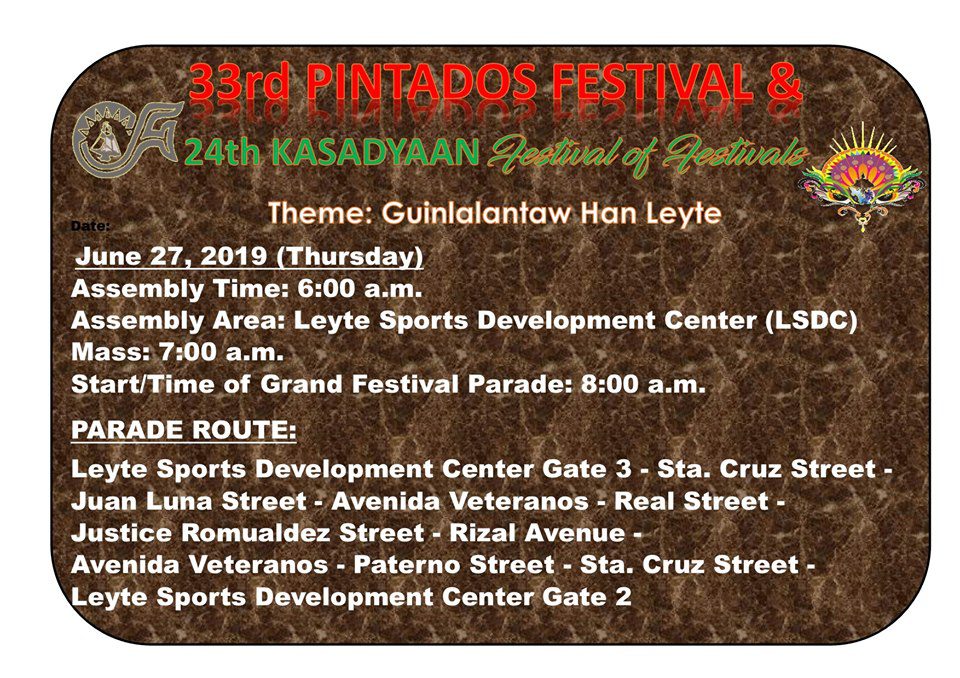 The Pintados Kasadyaan festival of the province of Leyte is one of the most anticipated festivals in the entire country. The June 29 celebration of this festival is also aligned with the feast of their patron, Senor Santo Nino de Leyte. The term “kasadyaan” means merriment in the vernacular language. The grandeur of the event may be seen through the different activities and presentations prepared by the locals. For example, presentations are being done to re-tell their famous folklores and legends through a song and dance numbers.

Specifically, the Pintados kasadyahan festival aims to show and present the rich cultural heritage along with songs and dances, of the entire Leyte and Samar. It recalls the pre-colonization times, wars, the way of living, and religiosity of the early Leytenos. To fully camouflage as an early warrior, participants of the festival would be wearing a painted face and body to resemble the old armors. They would then go to the streets of Tacloban City and begin to interact with other participants and other people witnessing the place. Indeed, by just merely painting themselves with different shapes, figures, and colors, they can show how rich their cultural heritage is.

Presentations of folk dance are also available with the primary goal of sharing their traditions before the colonization era. The concepts of worship, use of original sounds, re-telling of epics, and the likes, are also part of the festivity. Additionally, crisscrosses are also participating in the presentation making sure that they leave the visitors with a fantastic experience.

To trace the beginning of this beautiful celebration, let us first talk about how the place was developed. During the Spanish colonization, Spaniards were surprised to see many heavily tattooed men and women as they reach the shore of Leyte. They were then labeled as the “pintados.” From then, it was observed that they have their own set of beliefs and culture which includes religion. It was only in the year 1888 that missionaries were able to penetrate the old belief religious belief systems of the pintados when they brought the “El Capitan” to the island, the image of the Child Jesus.

Since then and up to now, the people of Leyte continued to progress and develop. Through the pintados are not any more physically visible, their belief system, their heroism, courage, and bravery, remains to the present pintados of the place, the Leytenos. The symbol of the tattoo will always and forever be a mark of their cultural and historical heritage.

The Pintados Kasadyaan Festival now is not any more little merrymaking, but it has become a way of commemorating how their people and their land flourished into who and what they are today. If you are looking for a perfect festival to witness, then I highly recommend that you choose the Pintados Kasadyaan festival. Not only you will be thrilled with the artistic and creative presentations, but you will also get to be more inclined into their rich, beautiful, and one of a kind history.